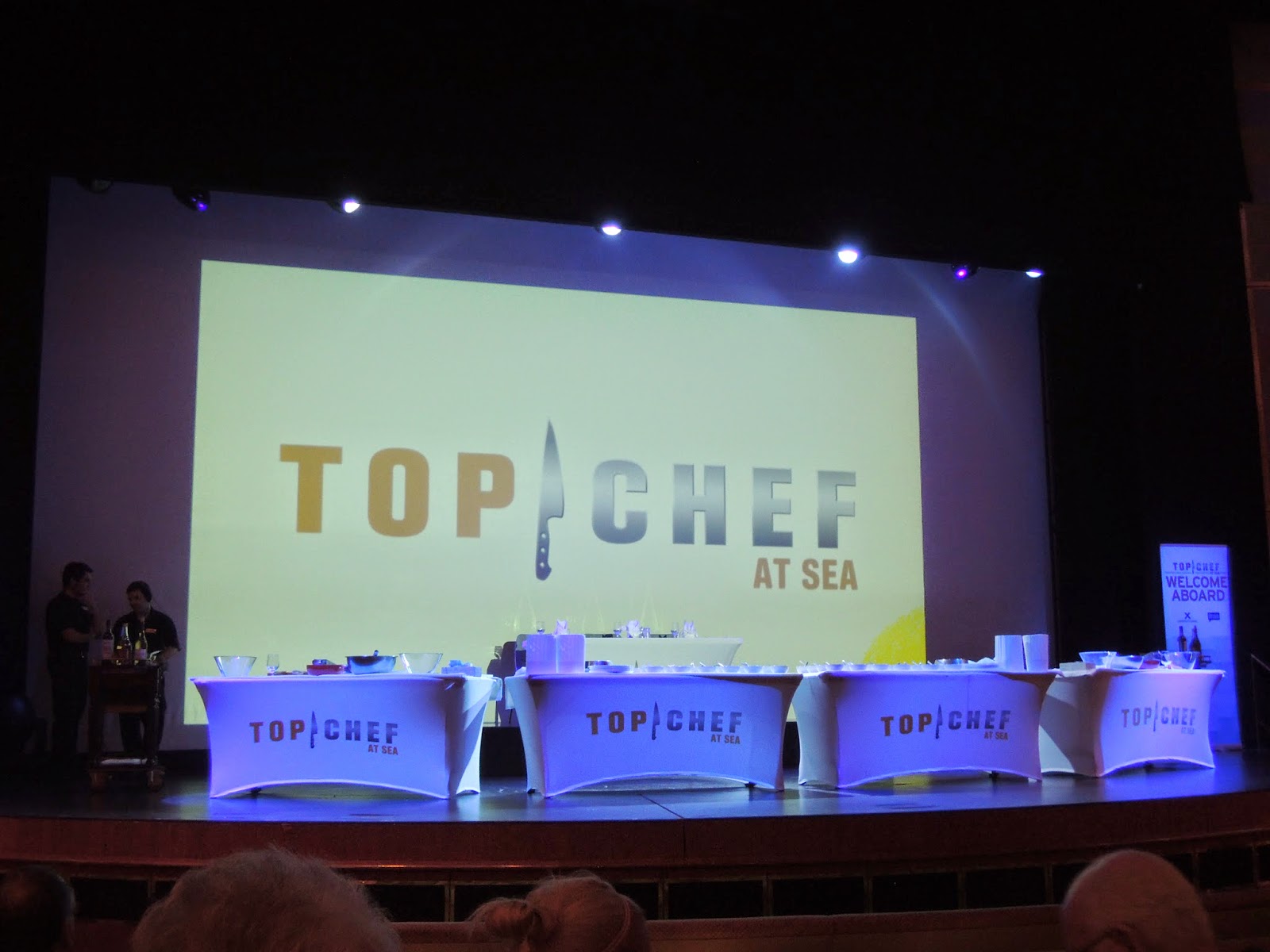 We had a neat program today at sea. Celebrity cruises partnered with Bravo's Top Chef series. They've been showing a season of Top Chef at sea. And today's program had an audience participation. 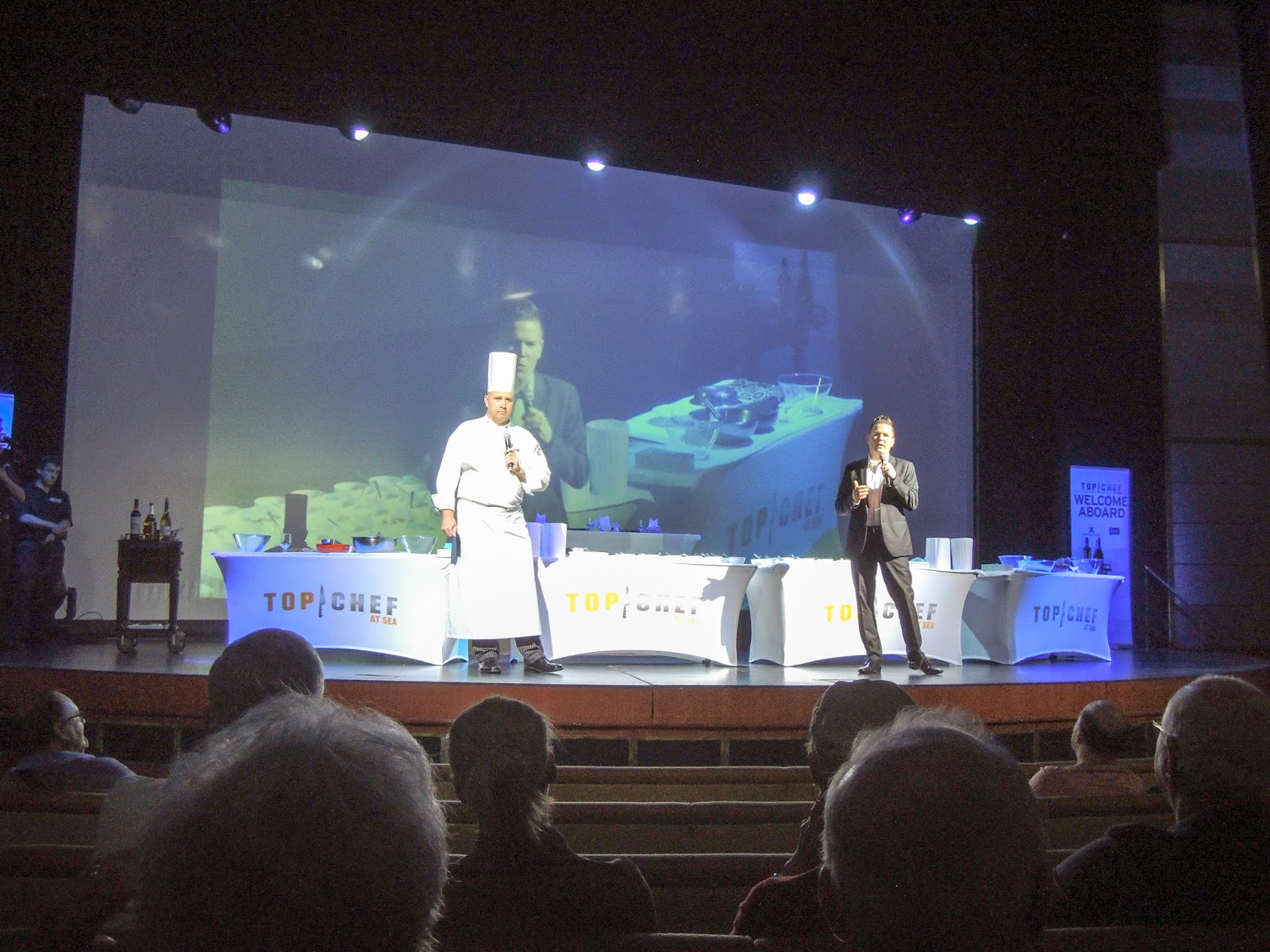 My wife was egging me on to put my name in the hat, but I'm not one to get on the stage. The host came on and introduced his co-host, the ship's executive Chef. 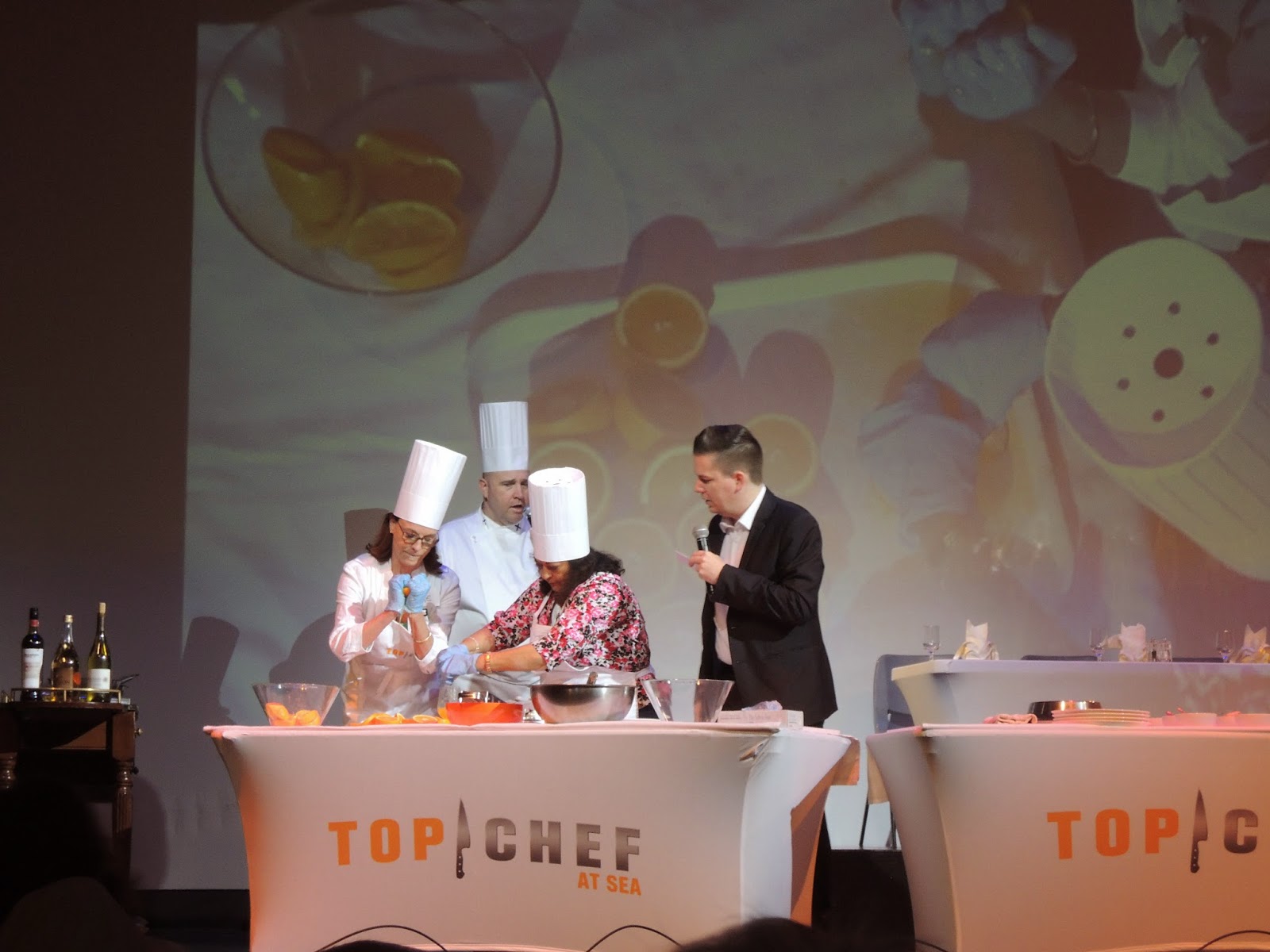 This event was dubbed a quickfire challenge. Contestants were chosen from the audience and paired together in two groups of two. They were set to complete three challenges: 1) squeeze a bunch of oranges and fill a glass, 2) separate six eggs (where the last was a hard boiled egg as a prank) and 3) whisk the egg whites until they are stiff and hold it over your partner's head for five seconds without anything dropping on them. 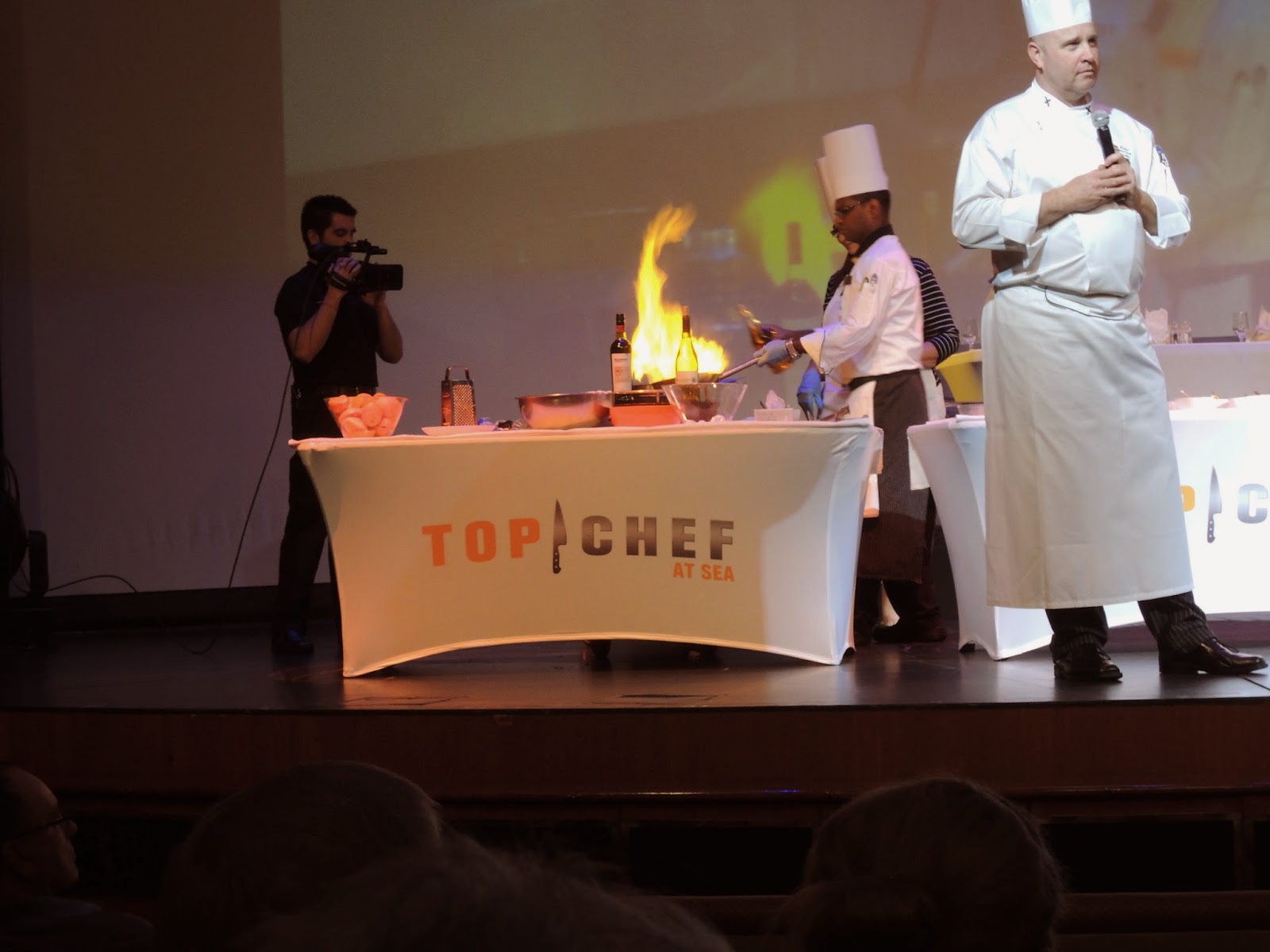 The winning team was divided in two and paired with the sous chef of the premium restaurants "Oceanliner" and "Blu". Pictured above with the flambe is Chef Vijay from Blu. 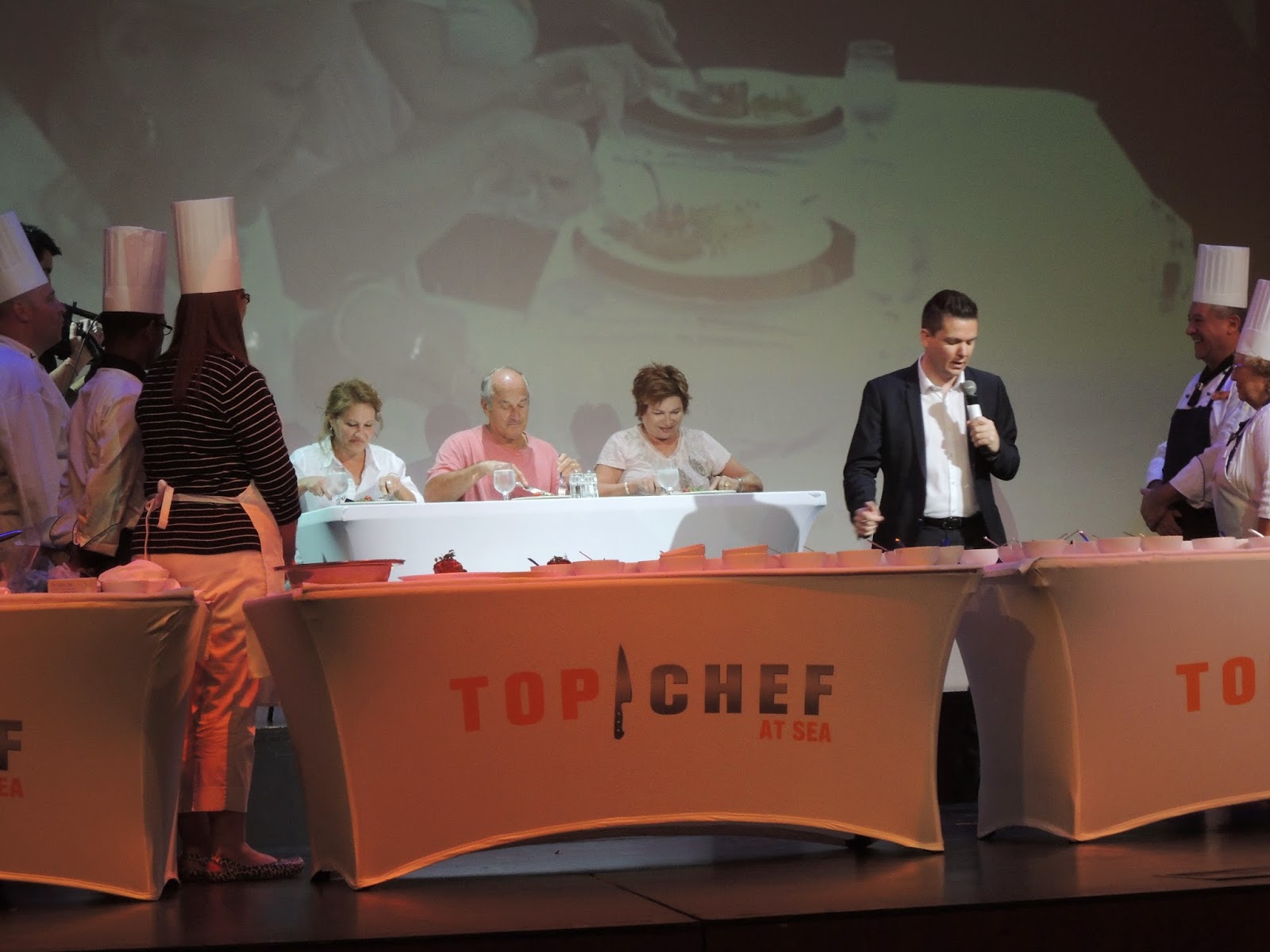 They had audience judges, they scored points according to the 1) dishnames "Ricard-Lo (something something something)" and the "Blu -MOO" (Blu Moo won the contest because "a fifty year old can't remember the Ricard-Lo name because it's too long", their words not mine folks). 2)Presentation 3) taste. It turned out to be a pretty close contest with team Blu-Moo winning.

Anyhow I wanted to showcase an example of the type of entertainment they feature on the cruise. At night we have variety shows, musicians, karoke, dancing, and live music all over the ship. They keep you well entertained on the boat.
cruise top chef yammering

Carl said…
In my opinion you should jump at this type of opportunity if it ever presents itself again.
September 1, 2014 at 6:47 AM

Ironjack said…
we'll see :) I didn't know what they were expecting us to do up there but I guess if they were calling up any random passenger it couldn't have been that hard right?
September 1, 2014 at 10:16 PM