Showing posts from September, 2008
Show all

Wheatberries?! what are those? 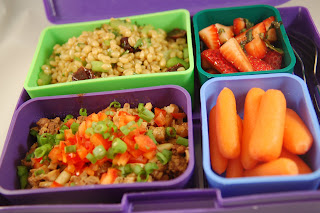 I have to confess, I was really struggling with coming up with a bento this week. Nothing I flipped thru looked good. I had no inspirations over the week, and the few things I saw were disqualified by the "must be healthy" guideline. Non-detered, I turned to the Food Network for some help. After watching a few shows I finally saw something of interest. They had this recipe for Wheatberry salad. I know my grains fairly well, but I've never worked with (or actually heard of) wheatberries. So there we have it, I built the box based off the show. I had to do some trimming and recipe changes to make serving the lunch calorie-friendly. It's weird even though the show is about healthy eating when you add up all the proper servings for the meal it came out to something like 1/2 the USDA calorie recommendation Anyhow, to the bento, we start things off with the main dish. I've got a do-it-yourself asian lettuce wrap. I used super lean beef and firm tofu as the basis of t
4 comments
Read more 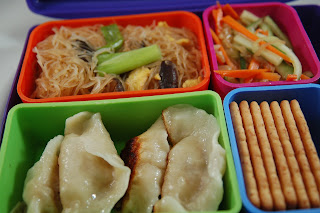 This blog is just about 1 year old! Can you believe it? I didn't think I could keep going for so long. Nor did I expect that I'd have as many visitors, so a big thank you to my readers. If you'll remember my first bento was based off Chinese home cooking, well, we will be revisiting Chinese home cooking for this blog's 1st birthday. Growing up my sister and I had two different views of getting lunch. She opted for a sandwich, I on the other hand didn't mind the gawking, curious stares, and occasional requests for a nibble on my more exotic lunches. At some point my mom had to send me with more just to accommodate the nibble factor. I can only hope that my future kids would be as adventurous. Today's bento is a typical lunch that my mother would put together for me when I was a kid. To begin we have my father's famous dumplings. Granted I didn't re-create these, my father tends to send me home with bags of dumplings every time I go to visit. He's r
3 comments
Read more 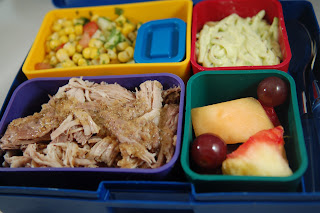 I gotta give full credit to the kernel (no pun intended see corn side dish) of this box to Julie over at SporaticCook . She posted a great looking pulled pork from the "Pioneer Woman". Very good looking recipe, even better tasting! So thank you Julie for the inspiration. I've always wanted to try my hand at pulled pork. I tried to cheap out on the time in the oven by following a short cut recipe (with the original ingrediants) that had a higher temp oven but a shorter time. It turns out that the other recipes cooking method was not long enough. I had to put the pork shoulder back in the oven another 2 hours. I bet this would have been ever more tender had I followed the original cooking instruction. From Pioneer Woman (who is she?) So originally it was going to be a pulled pork sandwich, I decided for dietary reasons to move it to be a pulled pork taco. So I rushed to fill the vegetable slot with something kinda tex-mex/southwestern in theme. I liked the idea of a cor
7 comments
Read more 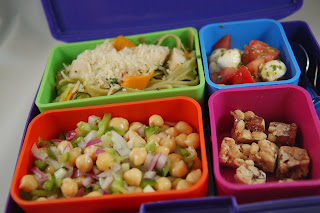 I confess this week's box came from watching Food Network. I only made tweaks to the for taste reasons. The idea was to go out to the farmers market and see what was fresh and good. It just so happens all the fresh and good stuff I found conformed to the recipes for the show I was watching. It was a yummy menu so why not? I'm not sure why but I've not really gotten around to visiting my local farmers market. It's a habit I intend to change, everything was so fresh and looked very inviting. Yes, in some cases the food is a little more expensive but it's nice to support my local farmer. Well let's tuck in shall we? We start with a nice Pasta Primavera, originally a vegetarian recipe, I felt like I need some protein. I happened to have some marinated chicken breast in the fridge. A quick pop in the oven yielded not just the chicken I needed for my Bento-eaters lunch, but for my dinner tonight as well. I can't believe how easy it was to put together this bento
2 comments
Read more 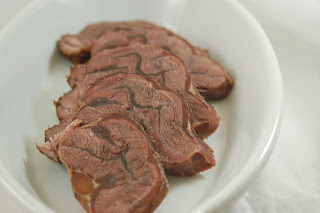 No bento this week, had to relax being that it was a holiday. None the less I still have a entry in my back pocket. This one comes from my Dad. It's called "Lu Rou" , it's a braised beef shank, normally served either as a cold appetizer or if cooked a little longer in a Beef noodle soup. Growing up in a Chinese restaurant there were many restaurant recipes that I learned and many traditional things that my father produced like magic. I'm glad I have a chance to get to catalog these. The braising liquid is a mixture of traditional Chinese five spice, a misc bag of spices and soy sauce. It's a pretty ubiquitous blend of stewing spices for many a braise which is used later for noodle soups. The cut o f meat used doesn't really have to be beef shank, however in a long slow cooking process, beef shank, having a lot of connective tissue, breaks down and gives you an interesting texture for a final product. Yes the final product isn't very pretty bu
Post a Comment
Read more
More posts