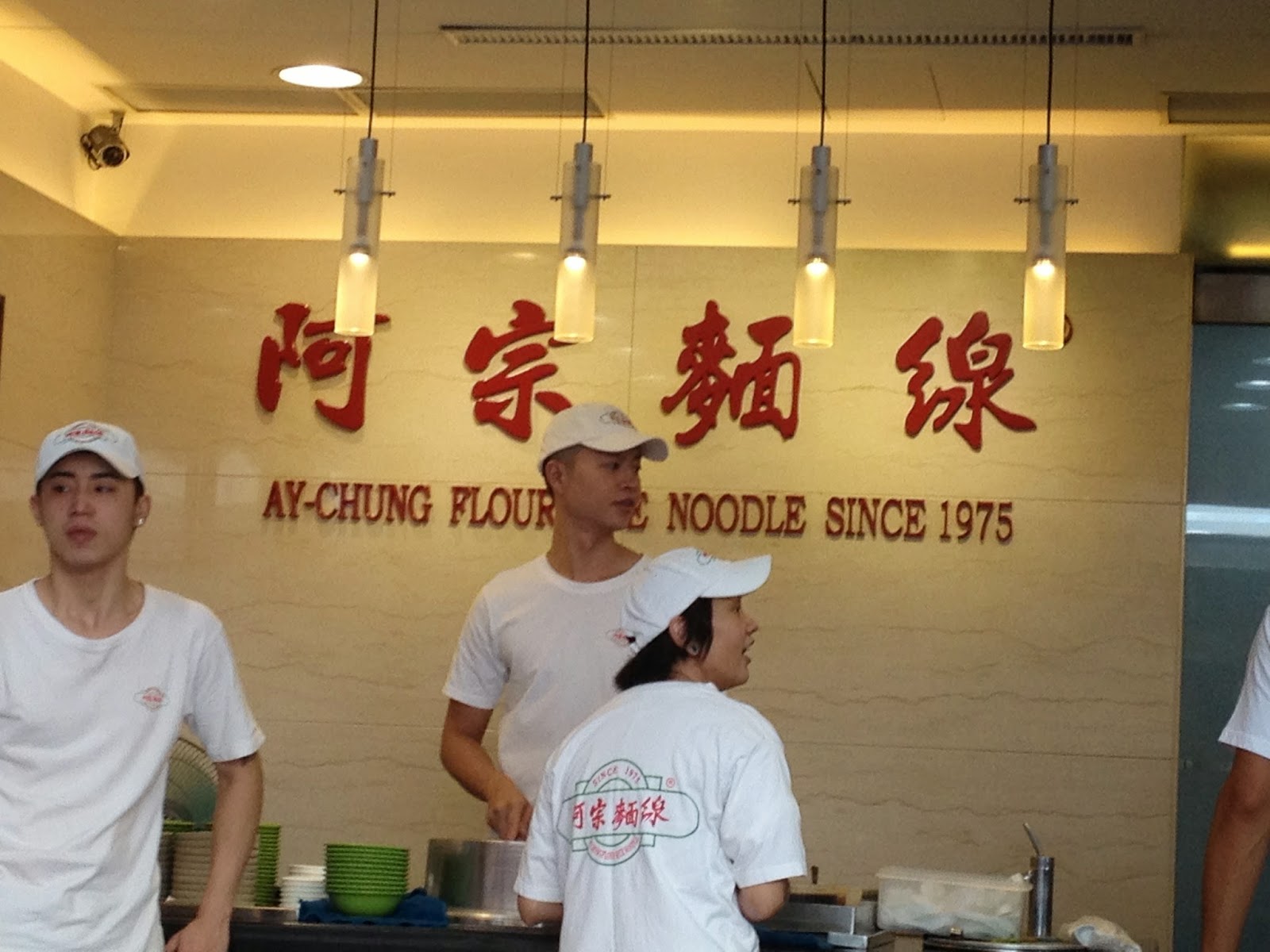 As it turns out this no there's wasn't a recipe to go on. Fortunately this was something I had tried before, my wife took me back in 2012 to visit her favorite Mian Xian  restaurant (Ah Zong Mian Xian 阿宗麵線) when we were visiting her old university stomping grounds.  All I remember from this place were a few things: 1) it was really hot outside 2) there was no where to sit so everyone was standing around (ok a few chairs) 3) the bowl of vermicelli was piping hot (why was I eating hot food in the heat?!). Sure, it was tasty, but I didn't burn it into my brain since there was little to no reason for me to want to replicate this dish. (had it been really cold I might have had a different impression). 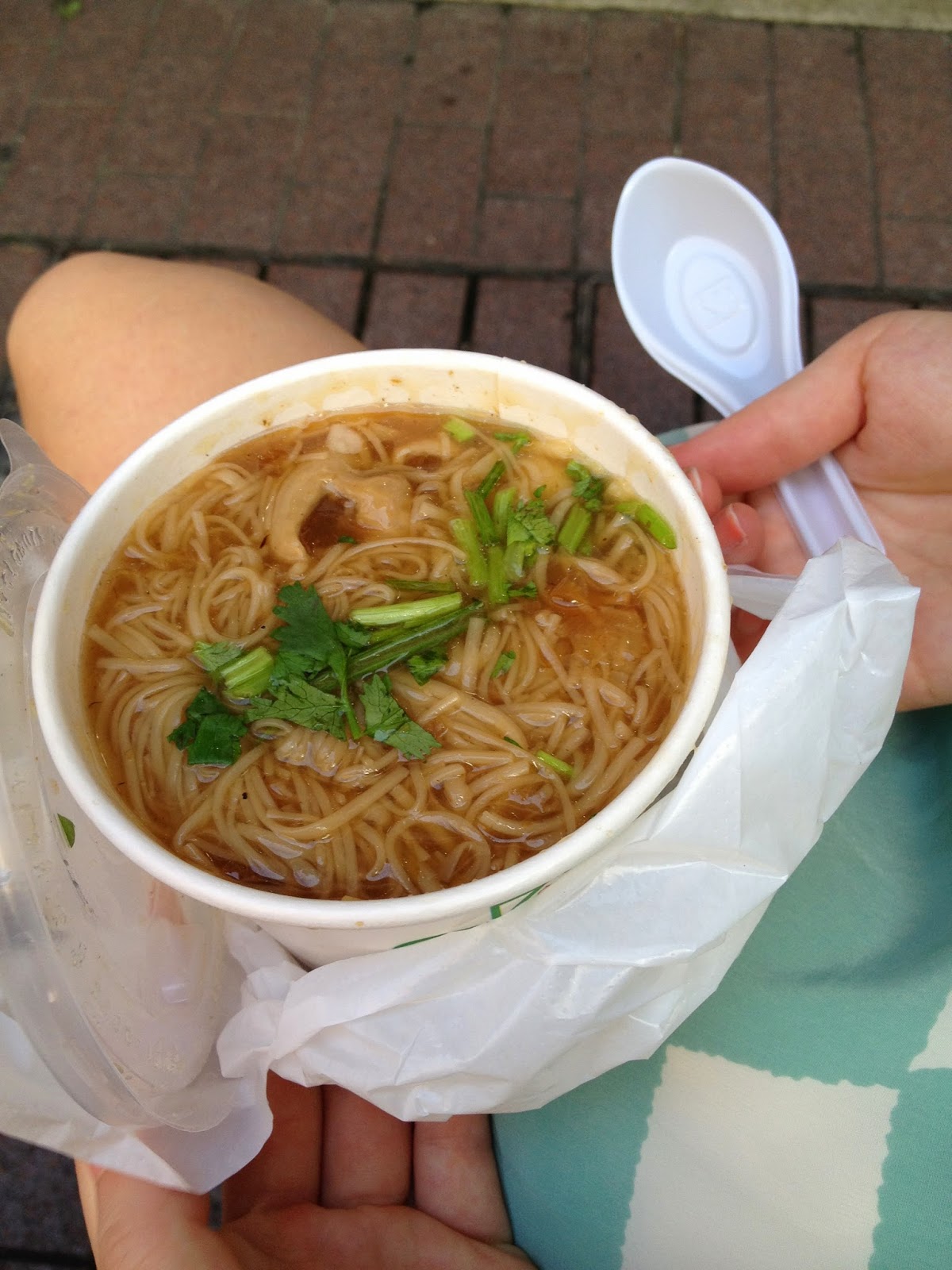 First let me explain the dish to you. The vermicelli is a thin noodle that has been cooked/toasted so that so it holds up under cooking. If you use the white vermicelli it turns into a blobby gooey mess because the noodles don't hold well in soup form (they dissolve since they are really thin). Mian Xian is served many ways, sometimes with Oysters but in this case Da Chang (大腸) which is pig intestines that have been braised. This is the same braising liquid for beef shank, tendon and many other Chinese braised dishes. For those of you not accustom to Asian cuisine I know you're going "blech". I'll admit there's quite a distinct flavor, but the Da Chang itself is very similar to braised pork belly (fatty bit minus the meat). It goes really well with the starchy noodles. Yeah I won't expect you guys to knock down the doors to try this recipe but this is very popular street food so keep an open mind (I'm looking any of my new friends here in Australia, I ate your vegemite

Anyhow as I said there weren't any complete posts (in English or Chinese) on how to make this stuff. There was some videos (in Chinese) and some broken webpages (also in Chinese) and a lot of pictures and accounts. I had to rely what I remembered, what I know about the dish, my wife's taste testing to help me get it right (and I did get high marks for getting it right at the potluck). So after all that, for posterity I'm recording the recipe and my trials and tribulations here: 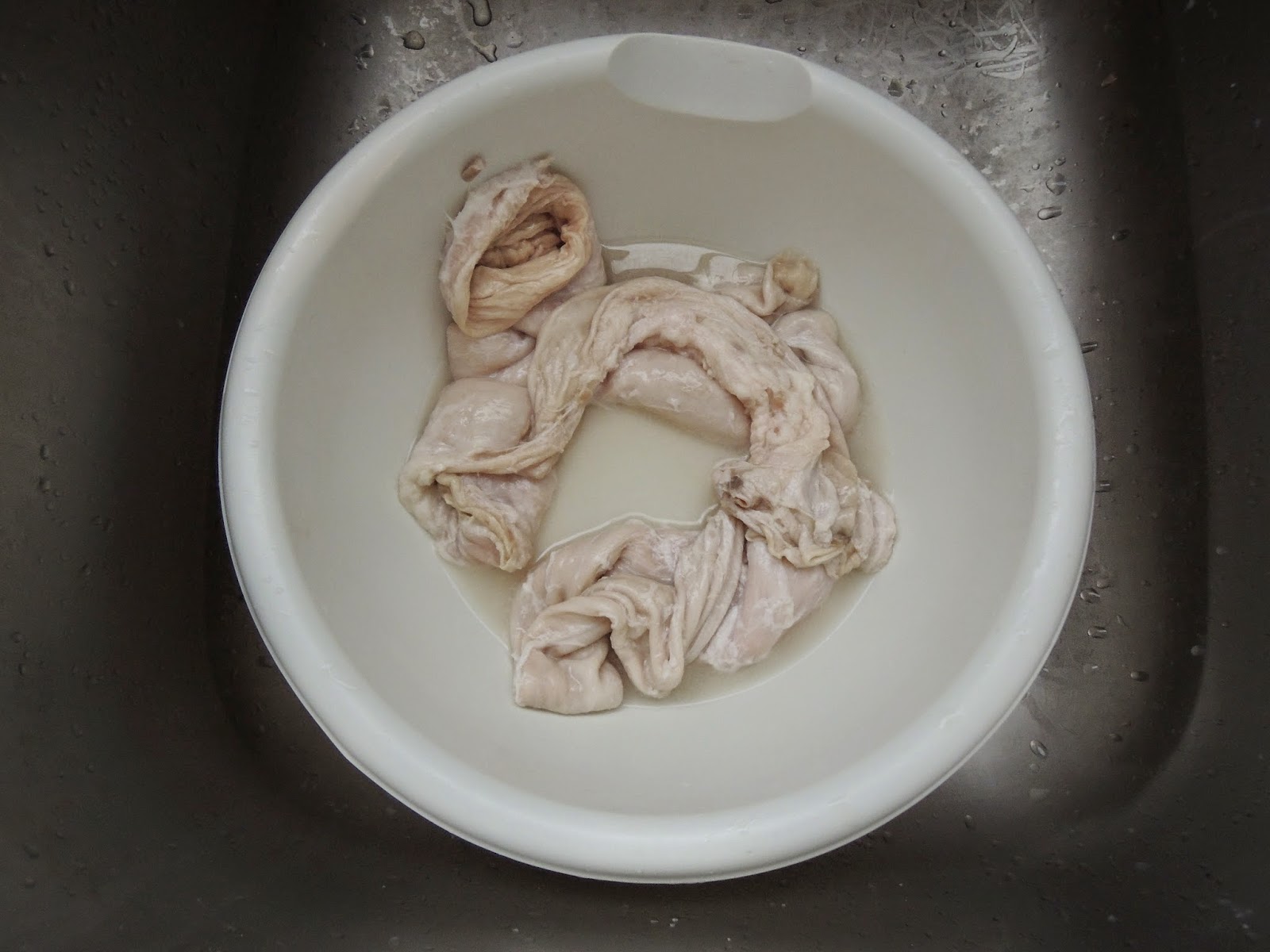 First the intestine, I ended up in Korean Grocery store to find this. I will warn you this is strong smelling stuff. I cleaned it rinsing and turning the length inside out (I kind of stuffed it inside itself) and then salted and doused the intestine in white vinegar (inside and out) and letting it sit for 10 mins. while I worked on the prep for the rest of it. 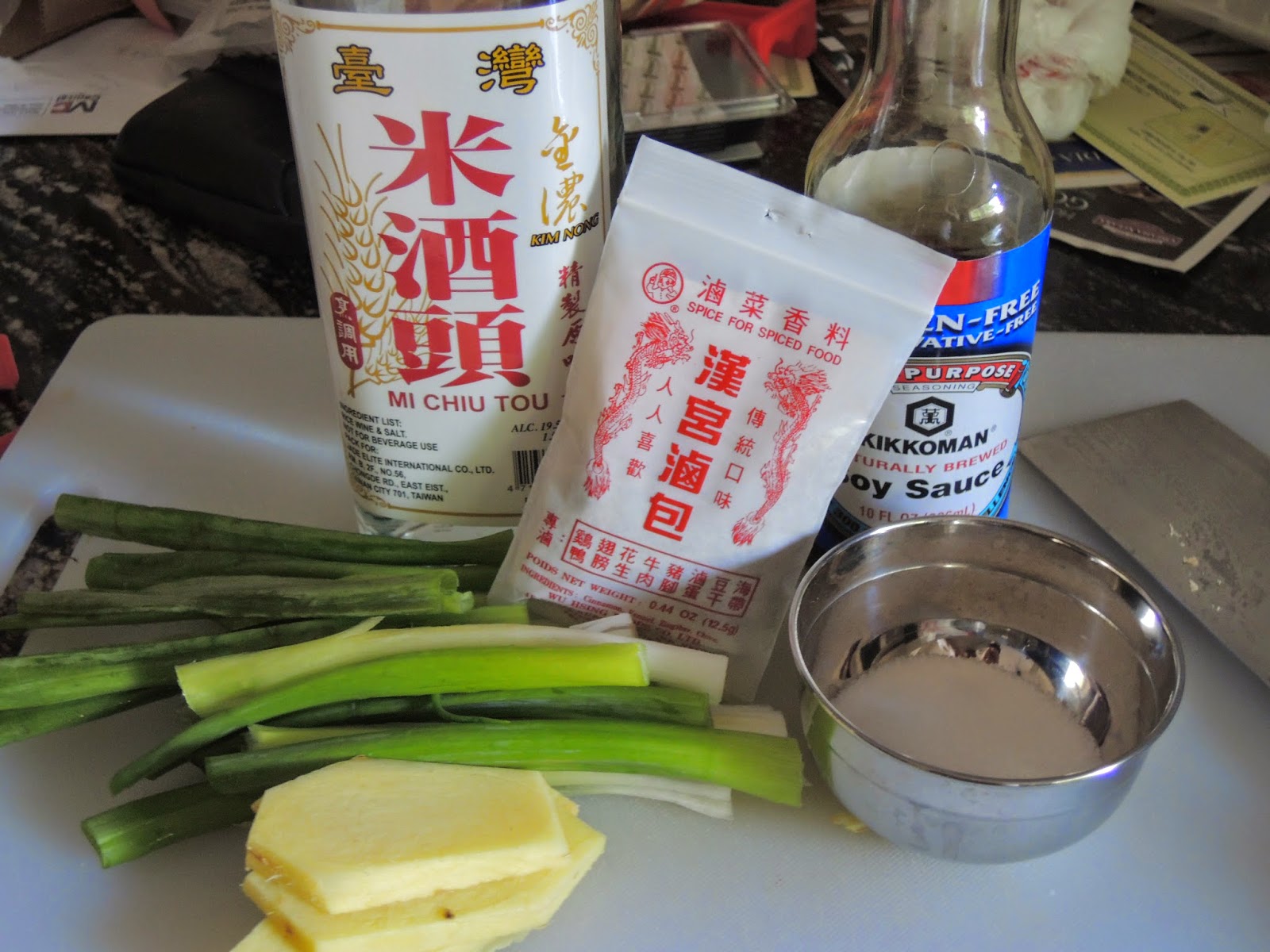 Here's a shot of what all went into the braising liquid: Rice wine, Soy sauce, sugar, ginger, green onion (white and green parts) and my dad's favorite brand of five spice packet. The five spice is actually sealed in a tea bag material so it's perfect for throwing in and removal later. 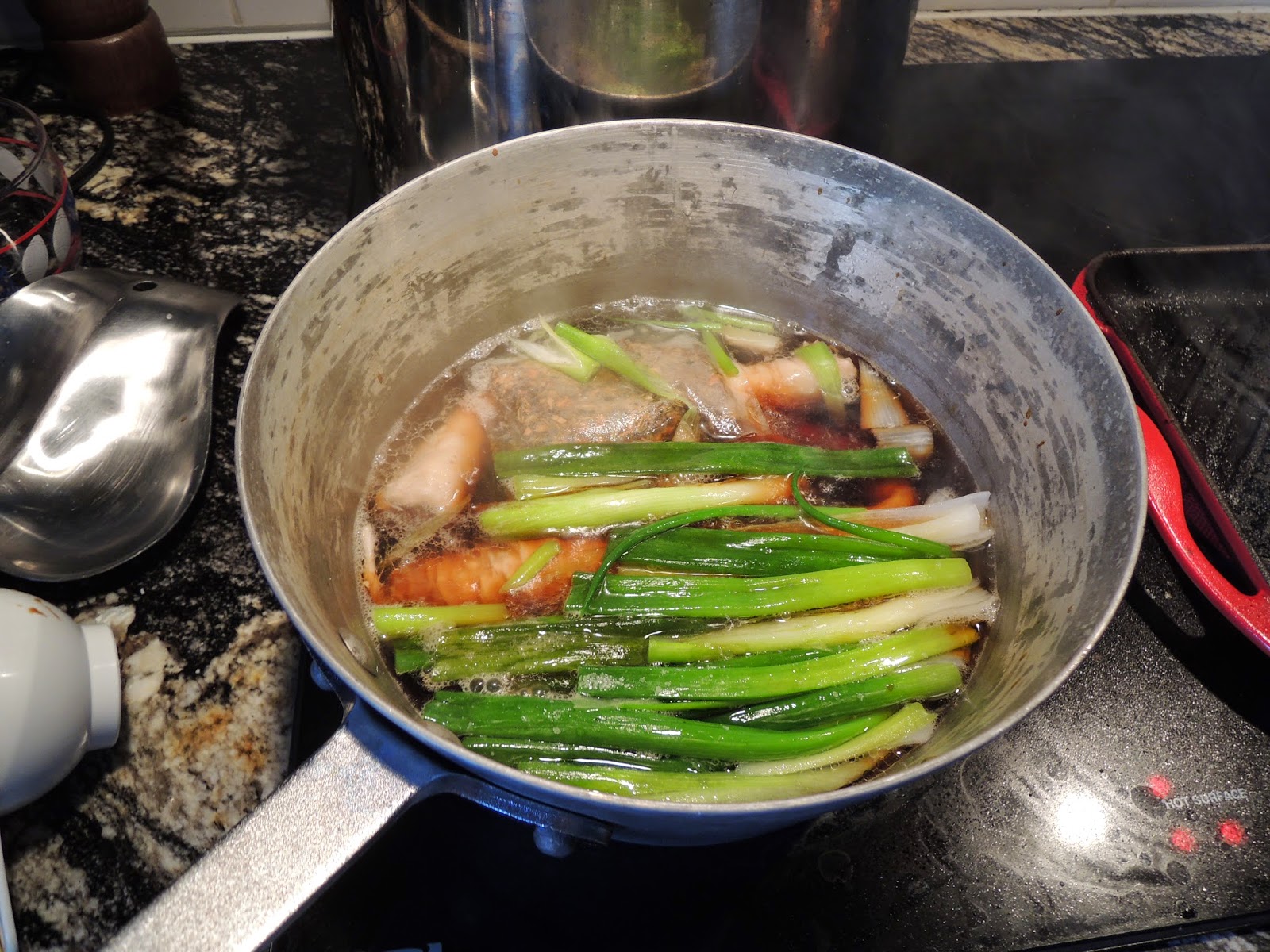 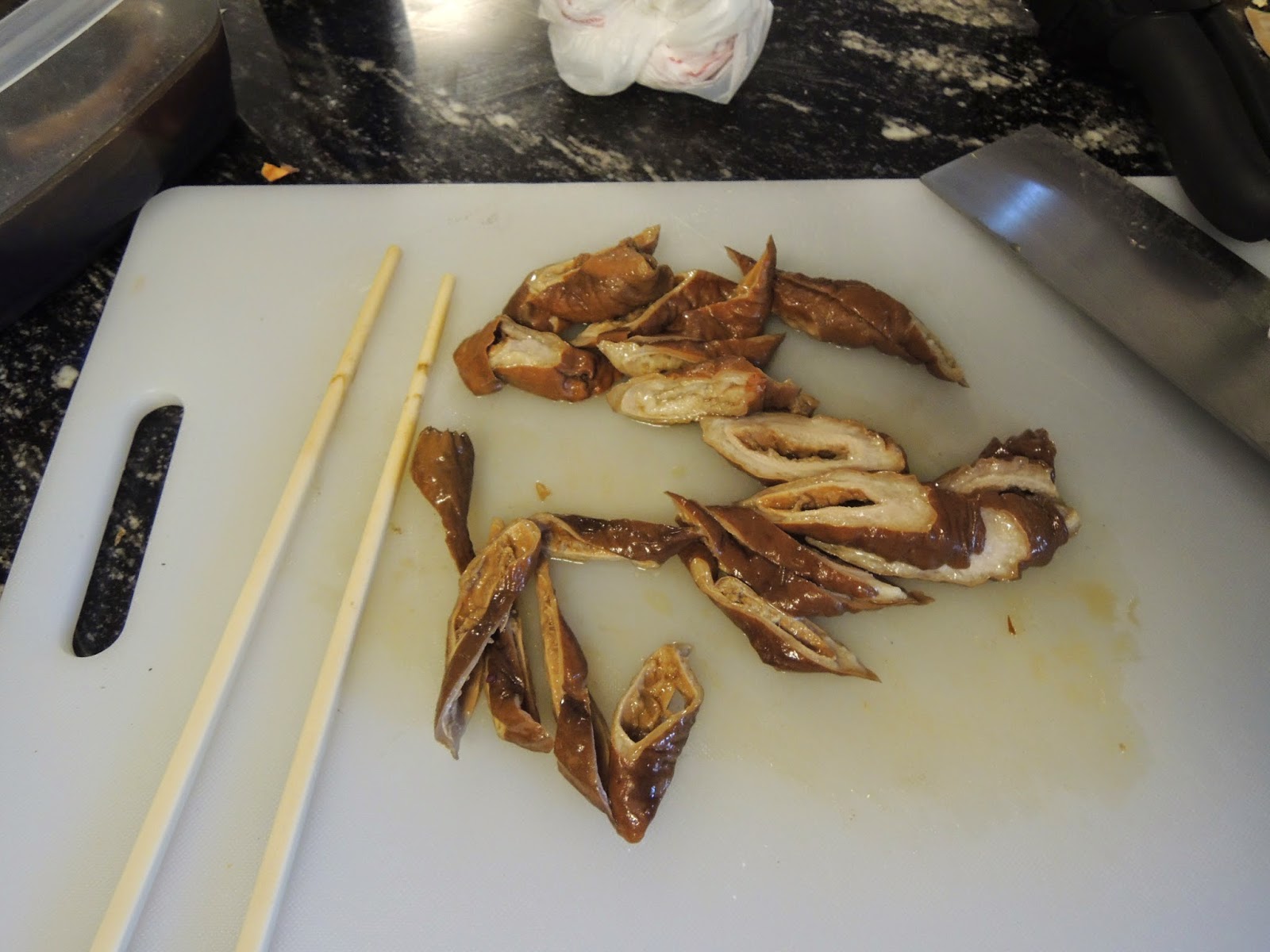 When the Da Chang is done (I cut a bit off a tasted it for tenderness to now when it's done, it should not be "rubbery" at all and pretty much melt in your mouth). Slice the Da Chang on a bias (diagonal). Remove the five spice bag and strain the braising liquid into a bowl. 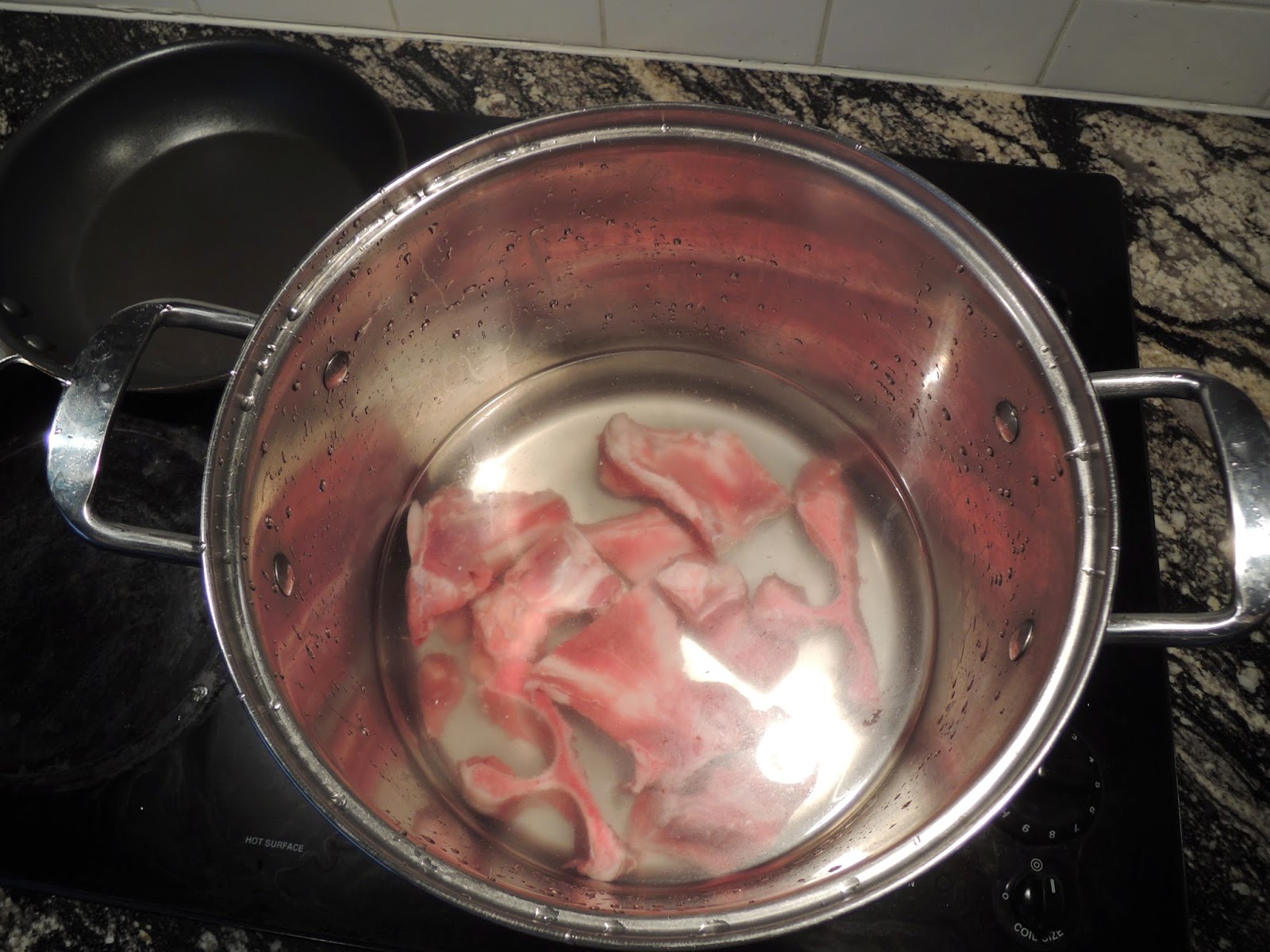 While you're waiting for the Da Chang to finish it's time to work on the soup and noodle part. The base for the soup is pork bones. You bring the bones to boil and drain (removing the impurities that come initially from the marrow) and re-adding water and bring to simmer. If you miss this part you'll end up with a cloudy soup. I let the broth simmer for at least one hour but I let it go for as long as I was waiting for the Da Chang. 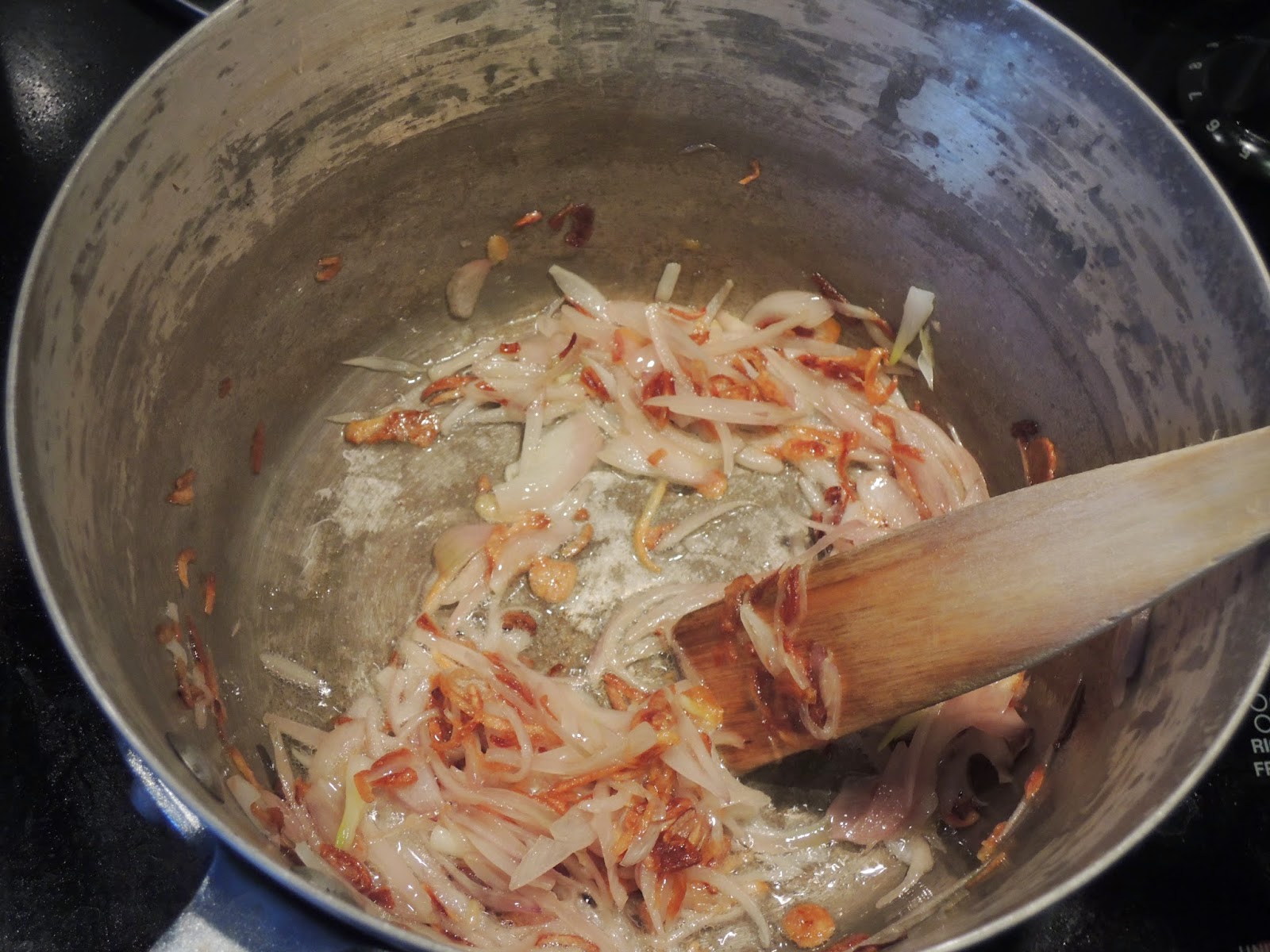 In a separate part, I sweat the sliced shallots. When they are soft I toss in some fried shallots (gives it some more shallot flavor). 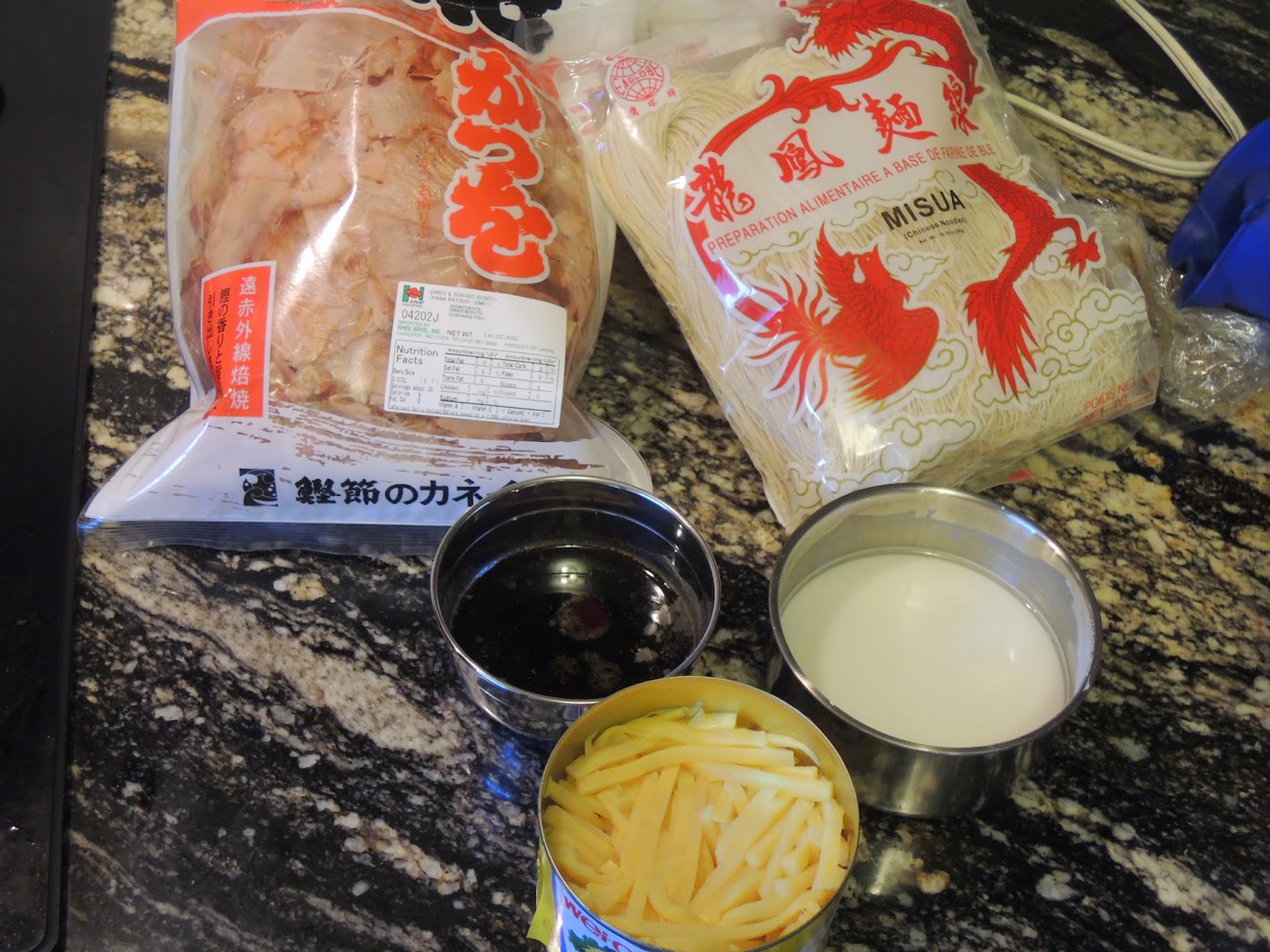 Note in the picture I have the wrong noodle package, the one in the picture is the "white" mian xian and it results in a very different texture. Use the "red" mian xian which has been pre cooked. I didn't get a picture of when I made it with the right noodles (title picture) but it looks about the same the only difference is that it held up over time maybe a little thinner in consistency.

Into the onions I put in two quarts of the soup broth, bonito flakes (3/4 of the package) and the bamboo shoots and bring the whole thing to a simmer for 10 mins to let the bonito flavor add to the soup.

I create a cornstarch with cold water (must be cold water or it doesn't disolve!)

Finally I add the whole package 300 grams (about 10.5 oz) of red noodles, vinegar, soy sauce, sugar, white pepper and sesame oil and bring to medium high heat. I cook the noodles for about 5 mins.

Add the cornstarch slurry to thicken a little at a time. If you over do it you can add additional pork broth. Just keep playing with it until you have a thick soup.

Ok that's it for now. I'm not even sure how to label this post, it's not equipment, vacation, or in a box food challeng? For those of you that have wanted this recipe, Enjoy!

Thoroughly wash intestine inside and out and rub salt cover in white vinegar. Allow to sit for 10 mins.  Mean while in a large pot bring enough water to cover intestine to boil.

In a separate pot add pork bones cover with water and bring to boil. Drain and add 5 qts of water and salt, bring to boil, lower heat to low and simmer for at least one hour (the longer the better)

Add 2 quarts of pork broth, 3/4 bag of bonito flakes, bamboo shoots and bring to a boil and simmer for 10 mins. Create a slurry with cornstarch and water.

Carl said…
Defintely sounds like an adventure in cooking. It would be something you would have to serve me and not tell me what it is. My wife’s Abuelita served me Menudo and I could not eat it. ;)
March 15, 2015 at 8:26 AM