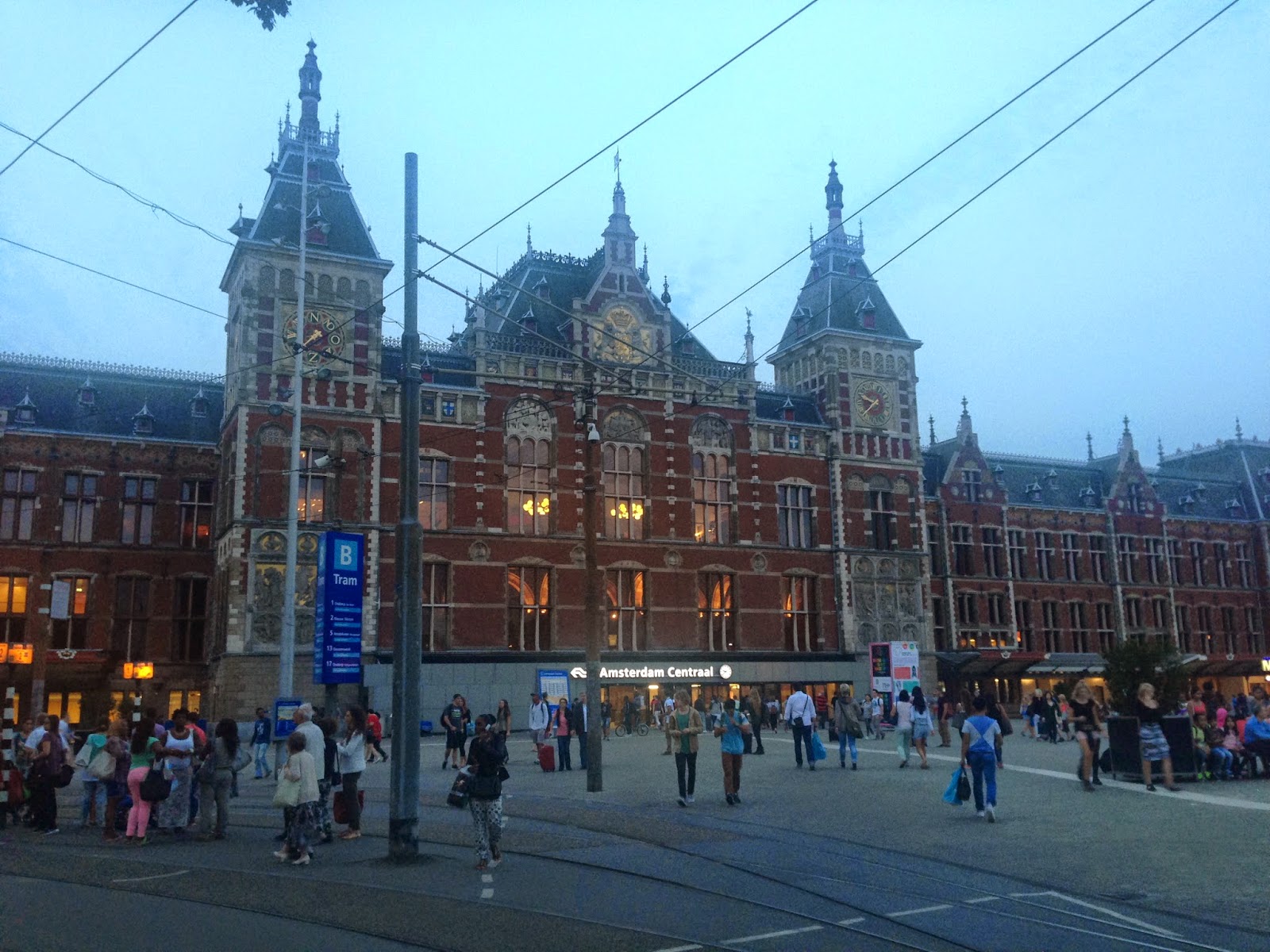 We've started off to Europe for a wedding in Belgium but first we're taking a cruise around northern Europe. We arrived in Amsterdam a day early to make sure we had plenty of buffer time for "just in case" moments so we wouldn't miss our boat. This worked out well since the airline managed to lose my luggage between checking in and prior to boarding our plane leaving home (I have no idea how that happens). As a result we got a late start in Amsterdam (above is the Amsterdam Central train station) but we did manage to take in a few sights and grab dinner. 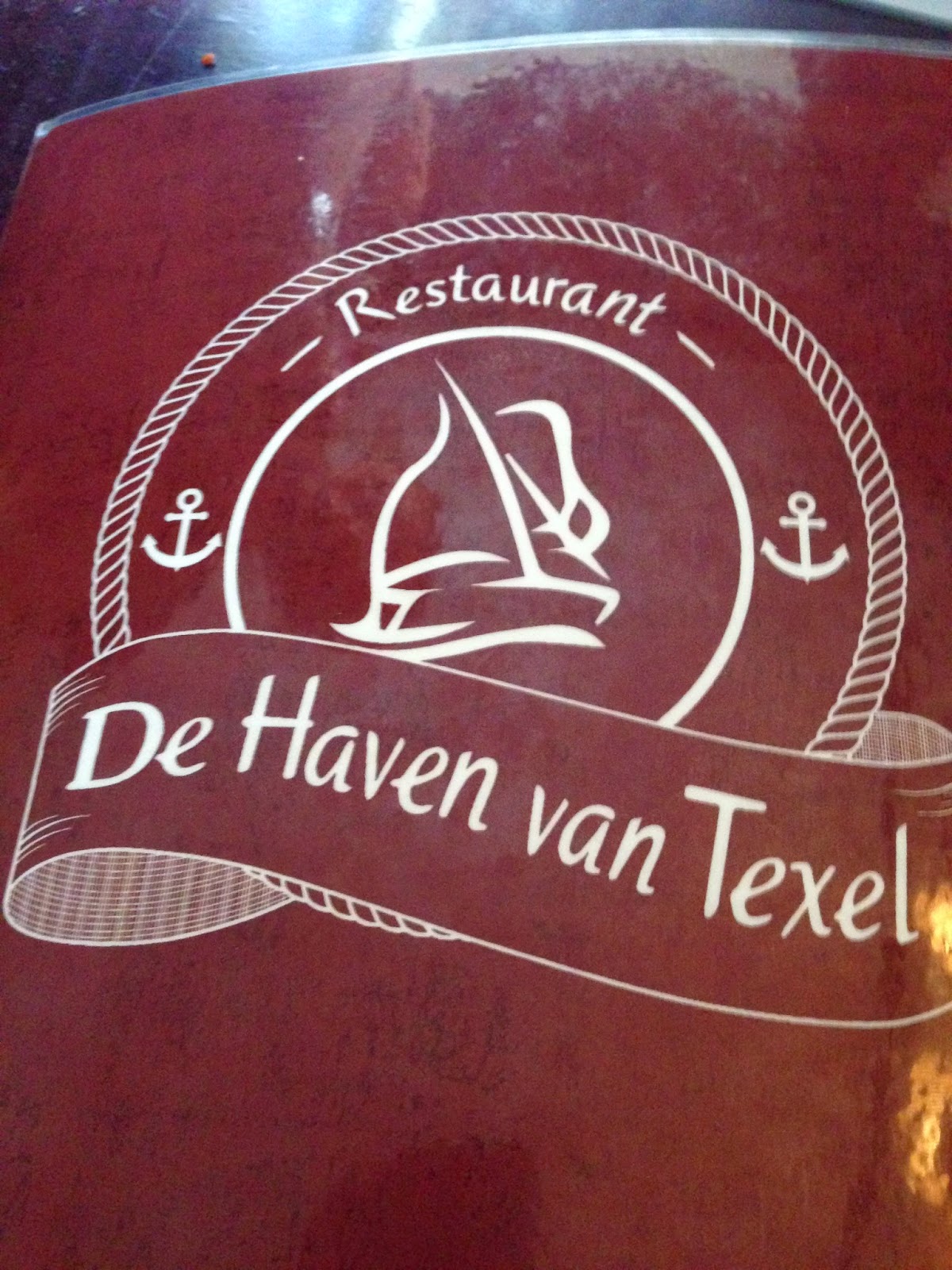 We wandered into this rustic looking pub "De Haven von Texel" that turned out to be quite a popular destination. The table next to us was telling us they had been searching high and low for the place and gave us a few tips as to what to try and helped us translate a few things on the chalkboard. 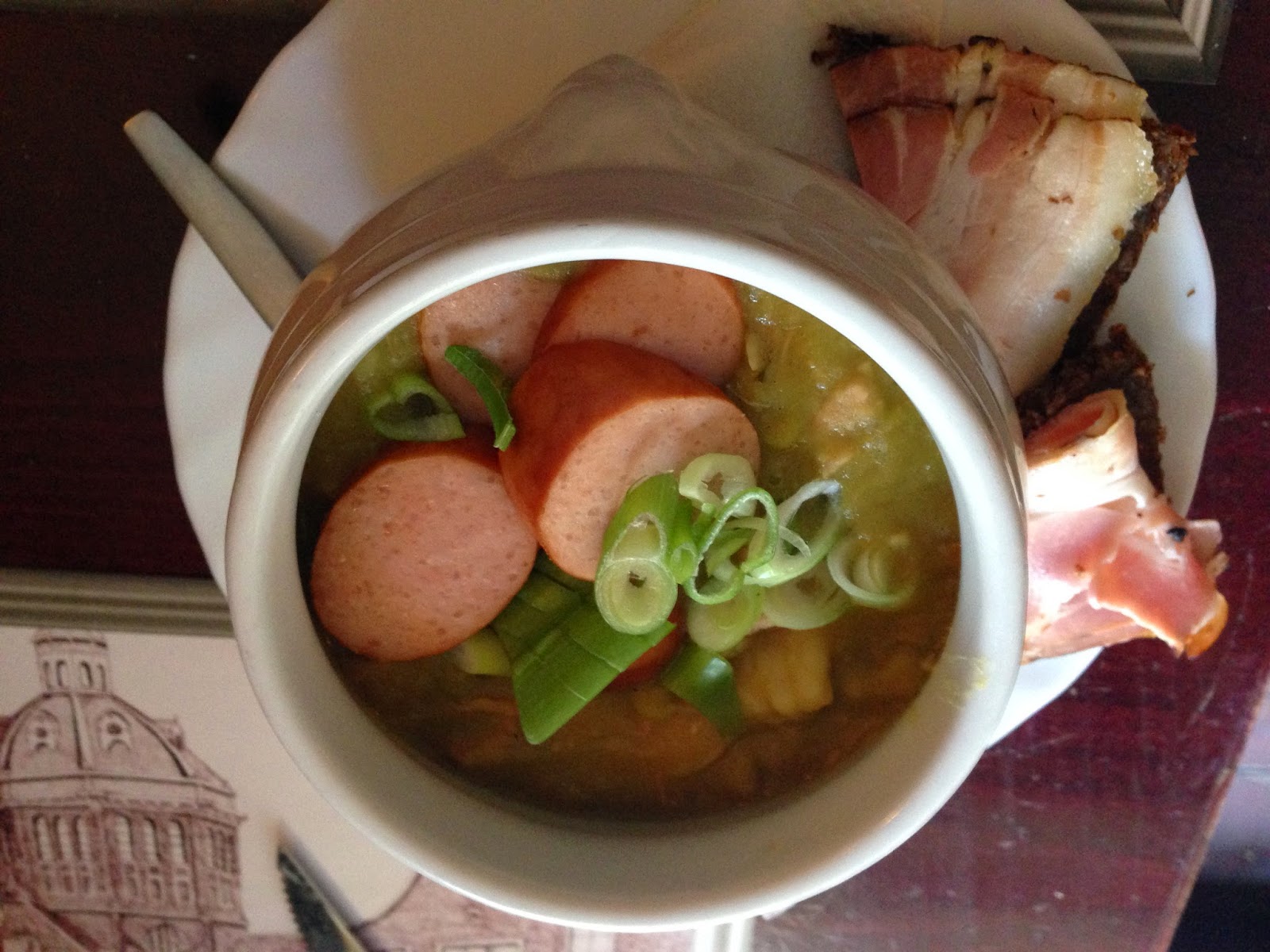 For starters we ordered the Dutch Pea Soup served with smoked sausage and bacon on rye bread. The bacon was sliced very thin like a prosciutto. The soup was very hearty and thick more like a Indian "Dal". There were really large chunks of ham in the soup, this bowl is what they mean when they say "a soup that eats like a meal". 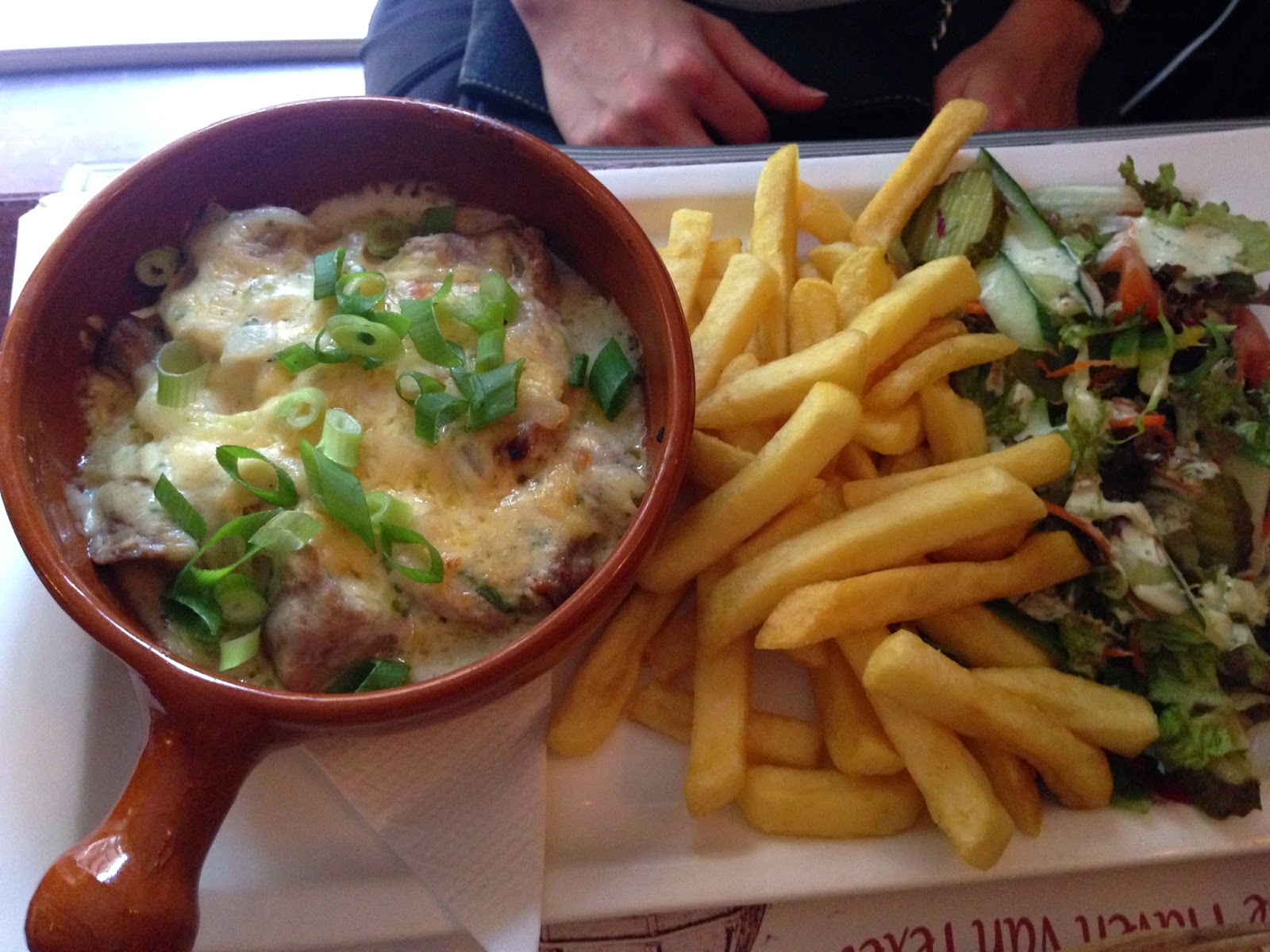 My wife ordered the "special" (I cannot remember what it was called, but I'll be looking it up.). It's a pork tenderloin gratin in a creamy mushroom sauce, the pork was very tender and the we used the fries to sop up the rest of the sauce. 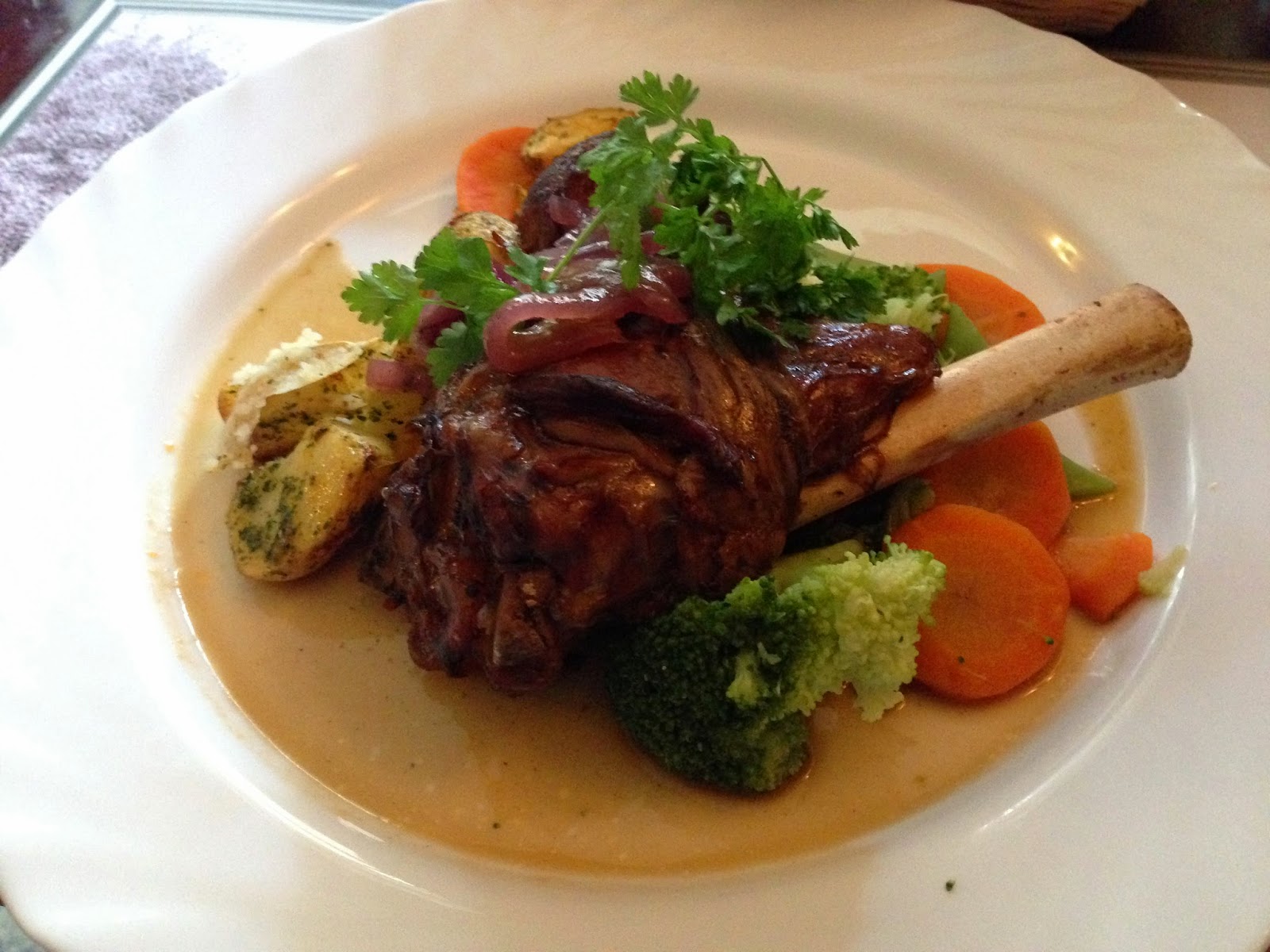 I had the Texels lamb shank. It was roasted and served with a gravy made of roasting liquid. It was fork tender fall apart delicious.

The food was reasonably priced and everyone was very friendly. Our waitress took the time and told us a few things to go check out including the "100 site boat tour". 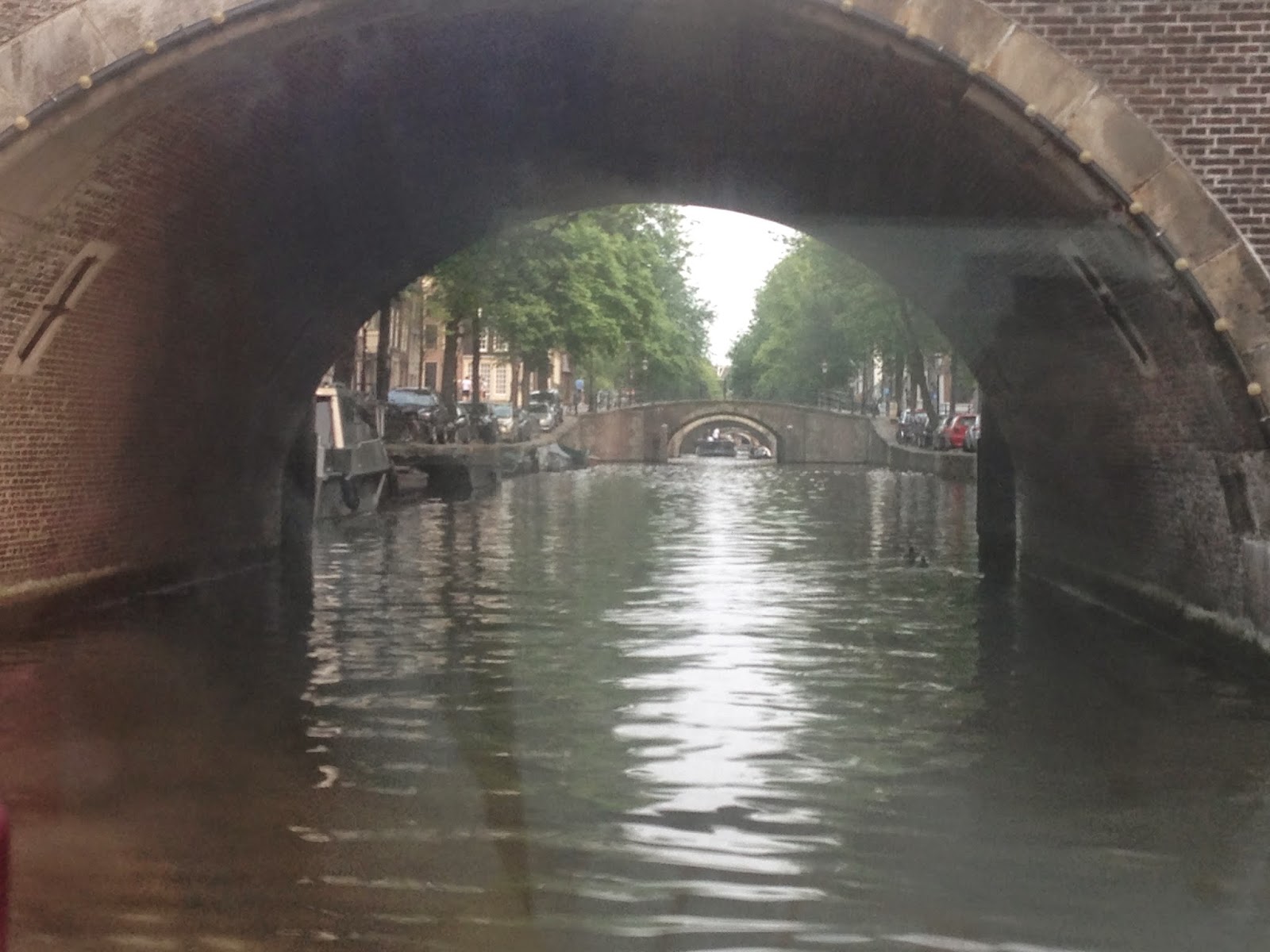 Based on the glowing recommendation we took the boat tour through the canals and saw some neat houseboats and buildings. This is a view of the "six bridge" canal where 6 of the bridges happen to line up down a canal for a neat picture. 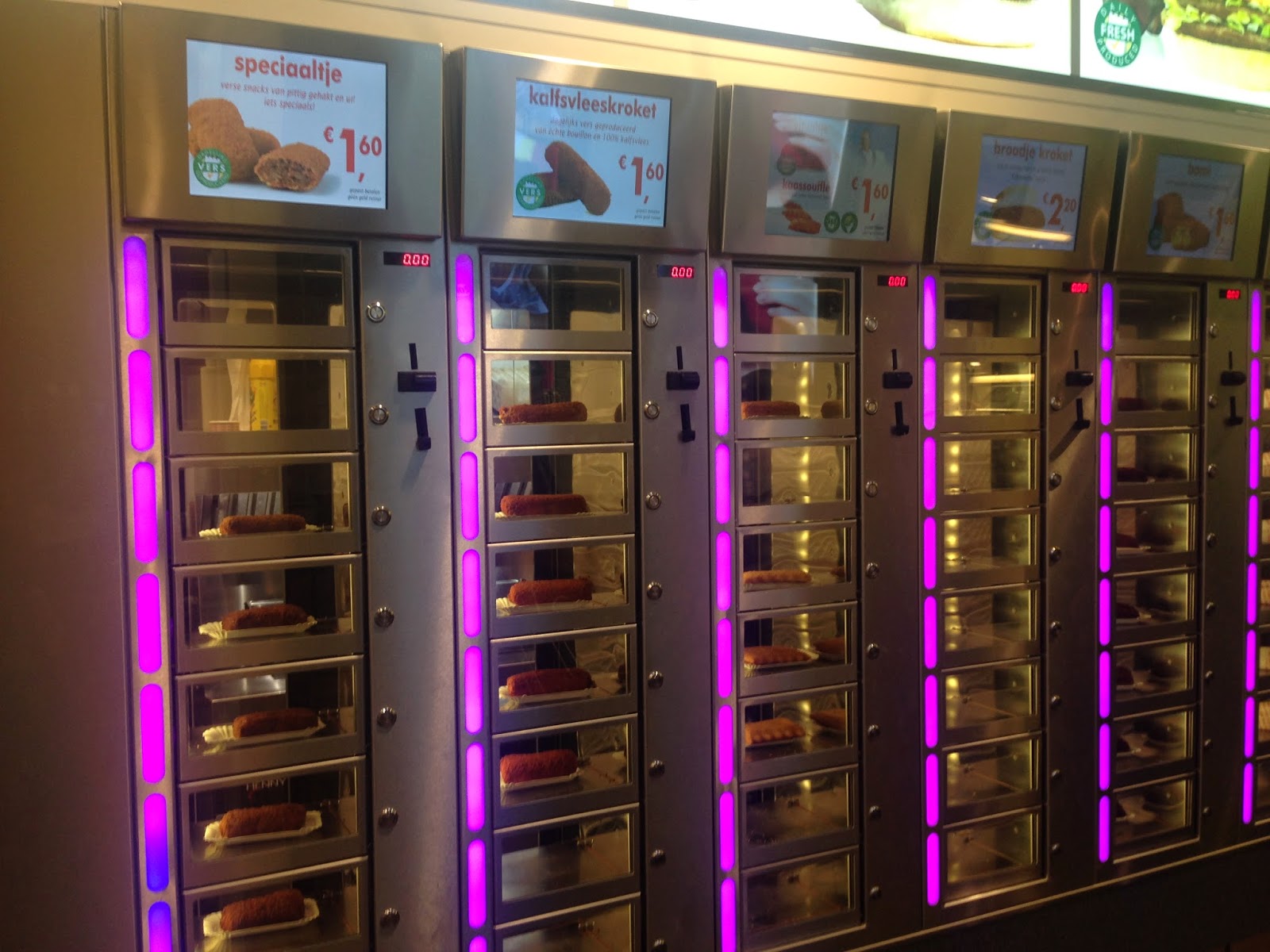 I had heard of these existing in the 1970s or so in the US (I don't remember the term for these vending machine fast food restaurants, dinerette?, automat?). Basically it's a large wall of vending machines where fresh sandwiches, snacks, fried goodies and desserts sit in a window and you insert your money and open the window. The kitchen behind the was manned by a small staff that refilled the empty windows as they got bought up.

We'll swing back through here at the end of our cruise before we go to the wedding there are a couple of more sights for us to see.
amsterdam europe lamb pork tenderloin soup vacation