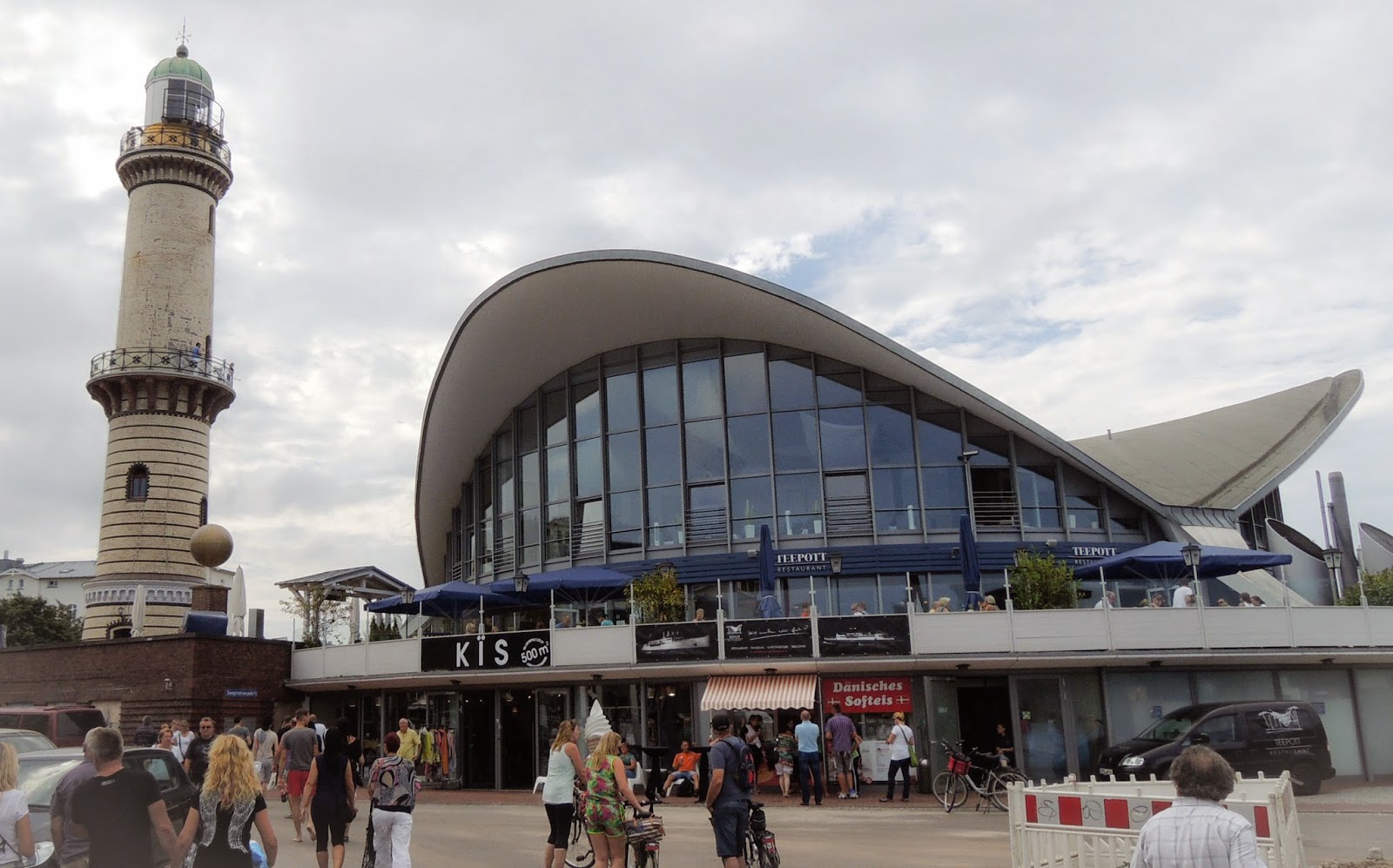 Our first port of call was Warnemunde, Germany. Warnemunde is a beach resort destination on the northern tip of Germany. It's usually only active during the summer season and considered a very popular surf destination. The beaches were very full of tourists both German and foreign alike. 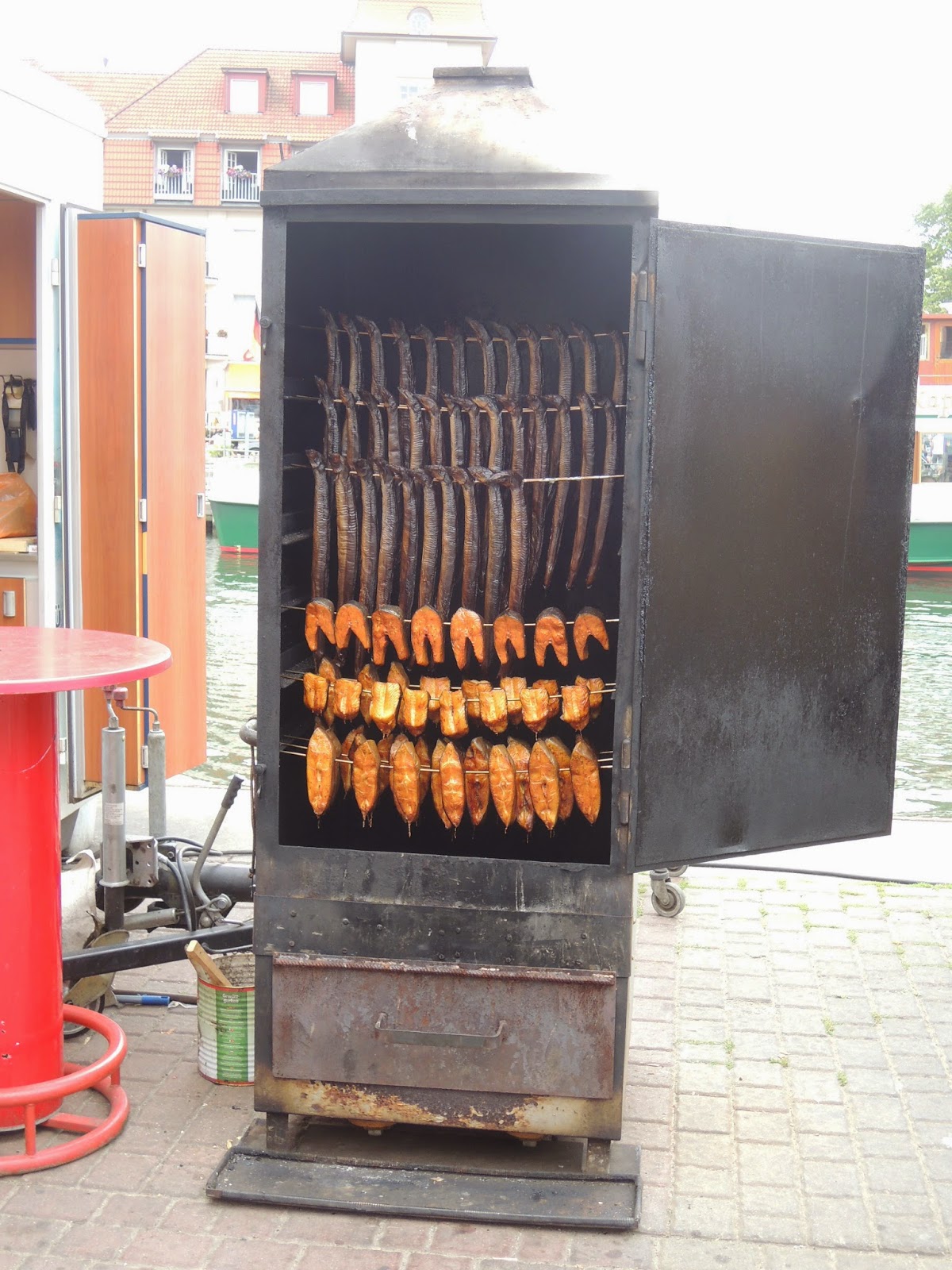 Warnemunde is also a fishing village. There were "food trucks" lined up one after another with their own smokers full of herring, cod and salmon selling both sandwiches, smoked and fresh fish. 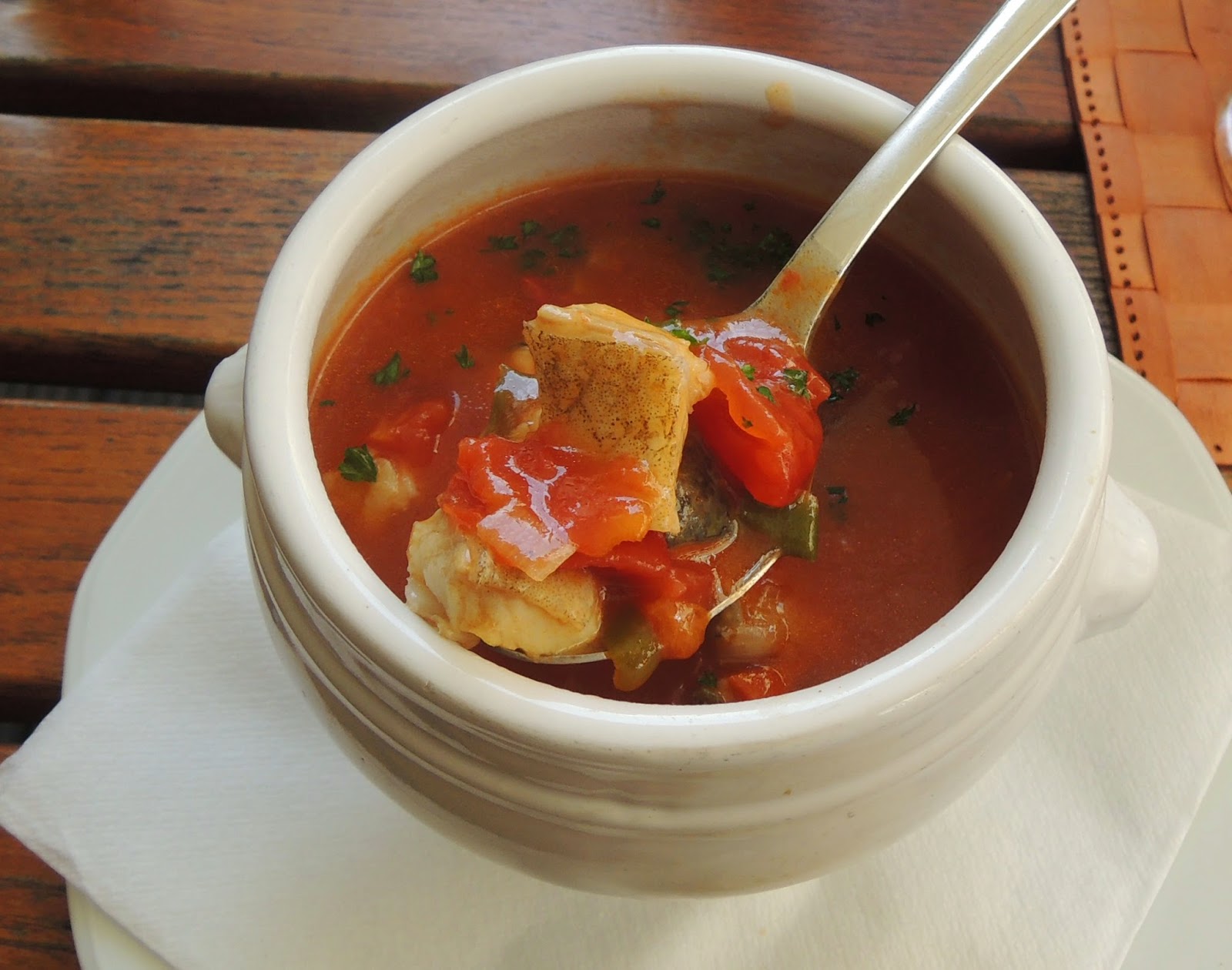 We stopped at a small local bar to order lunch. We started with a Warnemunde fish stew, tomato based with chunks of herring. The soup was a thicker "tomato soup and grilled cheese" type of tomato soup with various vegetables. 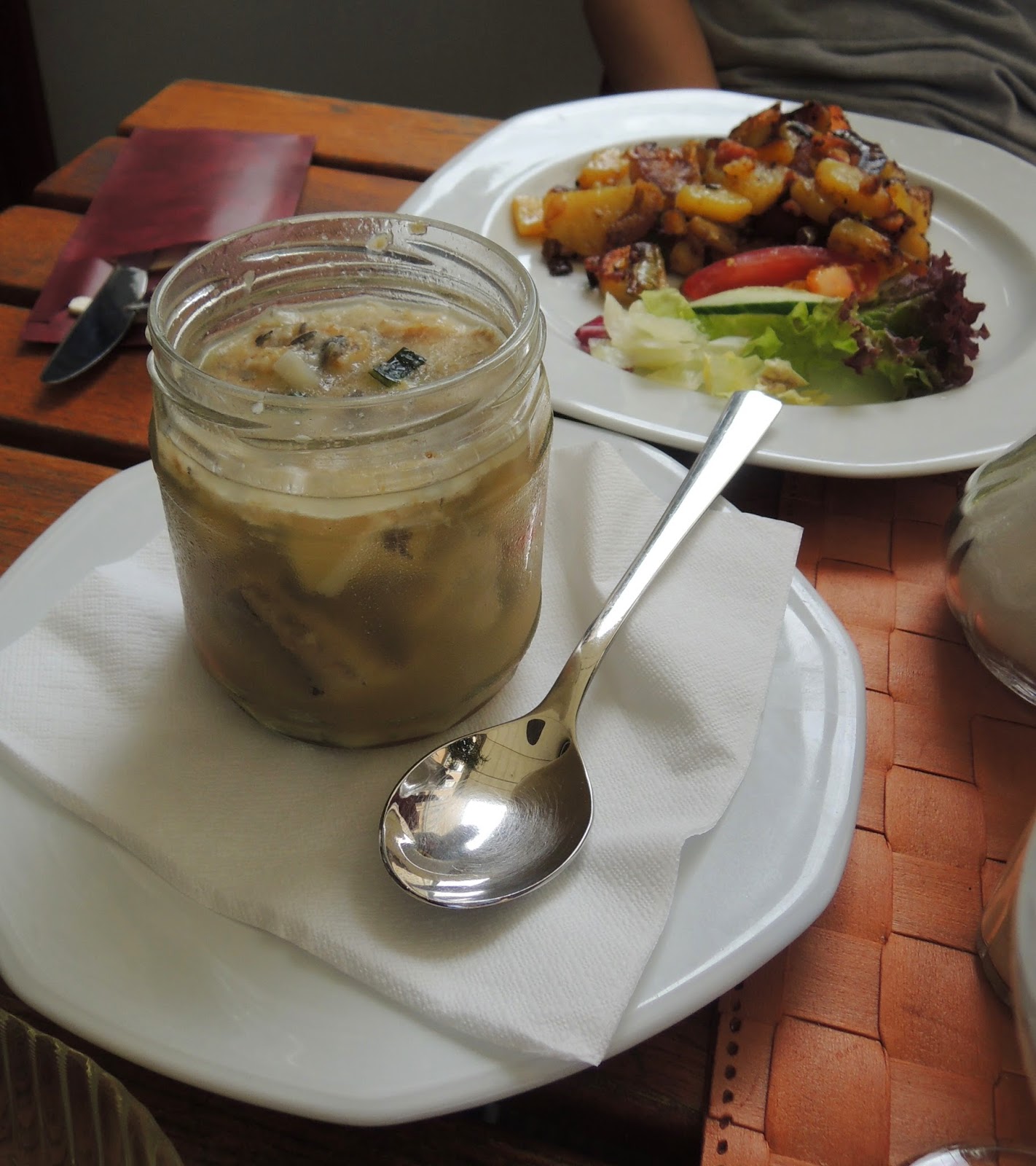 Despite my best warnings my wife wanted to try the Eel in Aspic. It was served with skillet fried potatoes. My best description is "pickled eel in gelatin". Not my cup of tea (or jar), the fish had plenty of bones (the big center bone was the biggest hurdle) but the cold pickled part was the hardest for me to get past. 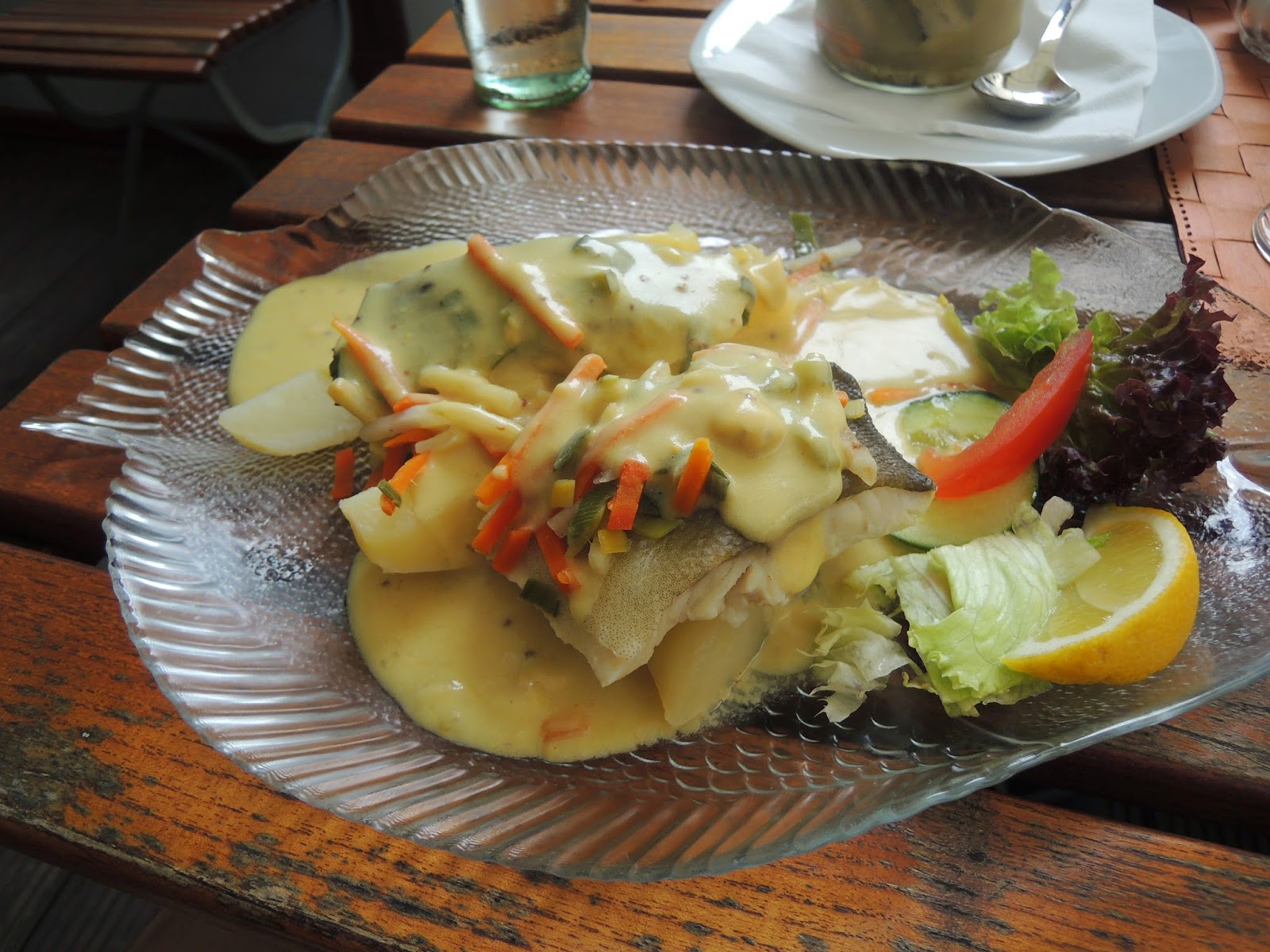 Fortunately I was fully prepared to share my steamed Baltic Codfish in Dijon-mustard dill sauce. The dish was served with potatoes and carrots and I enjoyed it. The cod was a fillet and boneless but I could have sworn it was herring (my experience of Cod is a thick fillet, maybe it's the over fishing) Both dishes reminded me of what I've tasted of Swedish dishes. 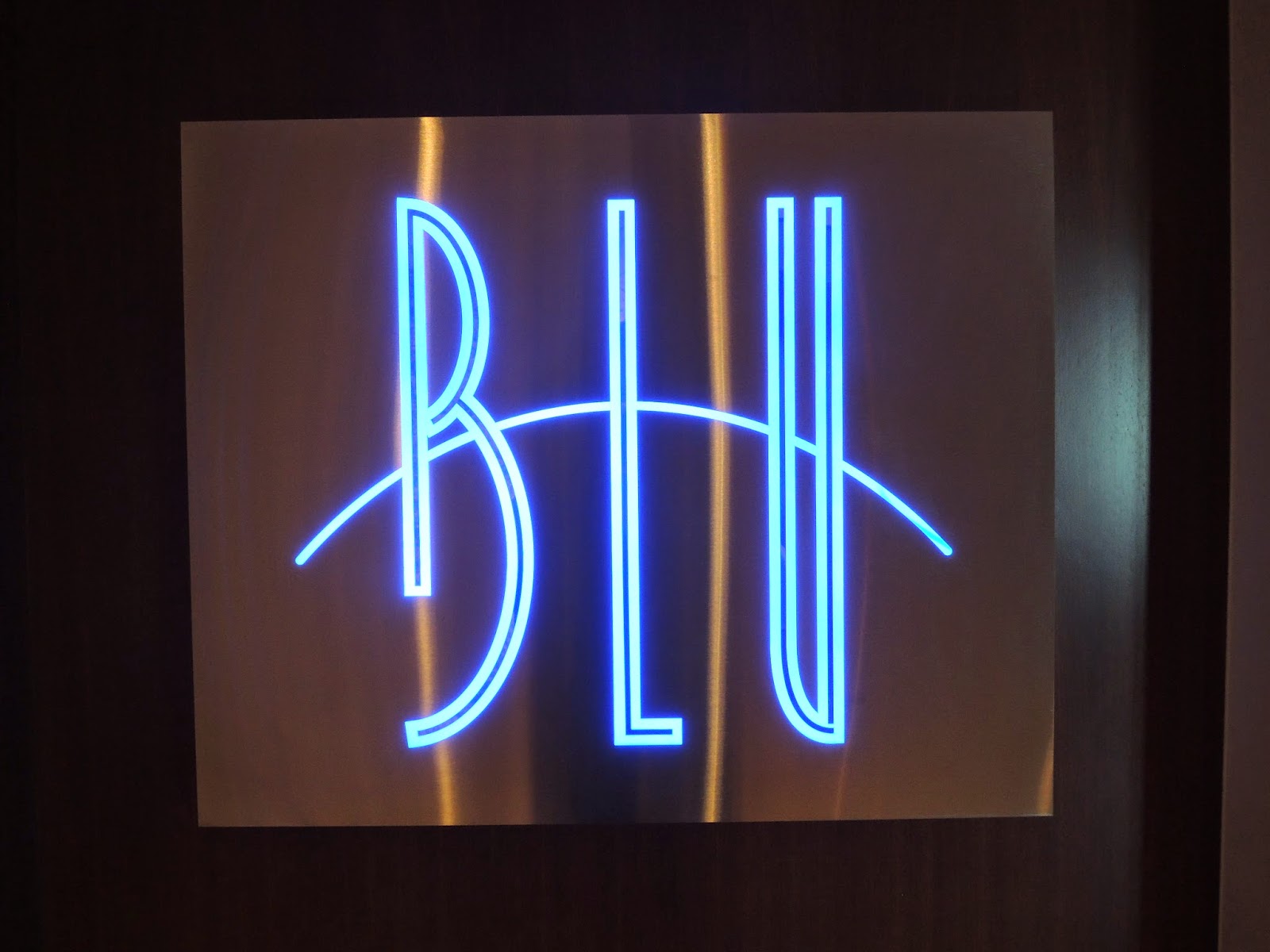 For dinner we visited Blu, the "healthy" dinner restaurant on the boat. The restaurant is a nicer restaurant than the regular dinner restaurant (but not as nice as the premium). There is limited sitting, has a greater staff to guest ratio (they. are very attentive, I think we had about four people checking on us on regular intervals), and features gourmet healthy dinners (after all the rich lunch and dinners we've been having a welcome change) 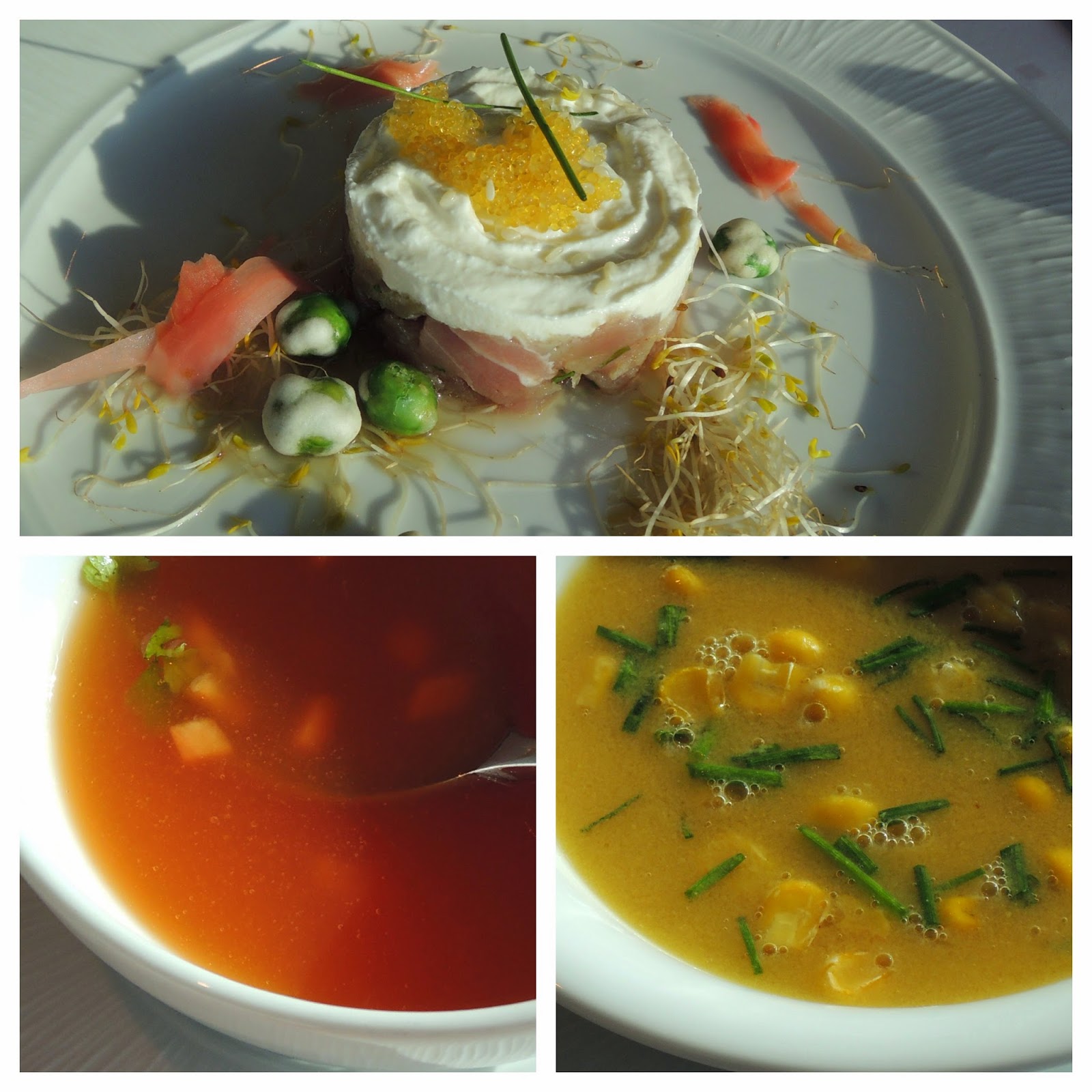 We had a nice table by the window overlooking the ocean, unfortunately this made for pretty bad pictures with heavy shadows. I did my best to touch them but here we are. We started with a Ahi Tuna Parfait, the tuna was topped with a crème fraiche and flying fish roe, accompanied with wasabi peas and alfalfa sprouts. A very light dish, the sprouts had a bit of a raw taste, I think if they were dressed with a bit of soy and rice wine it would have helped accentuate the tuna. The Chilled Papaya (bottom left) soup featured cinnamon oil and caramelized banana. I got the Chili and Corn broth with red peppers and cilantro. I really enjoyed this even more than the richer version we had the night before. 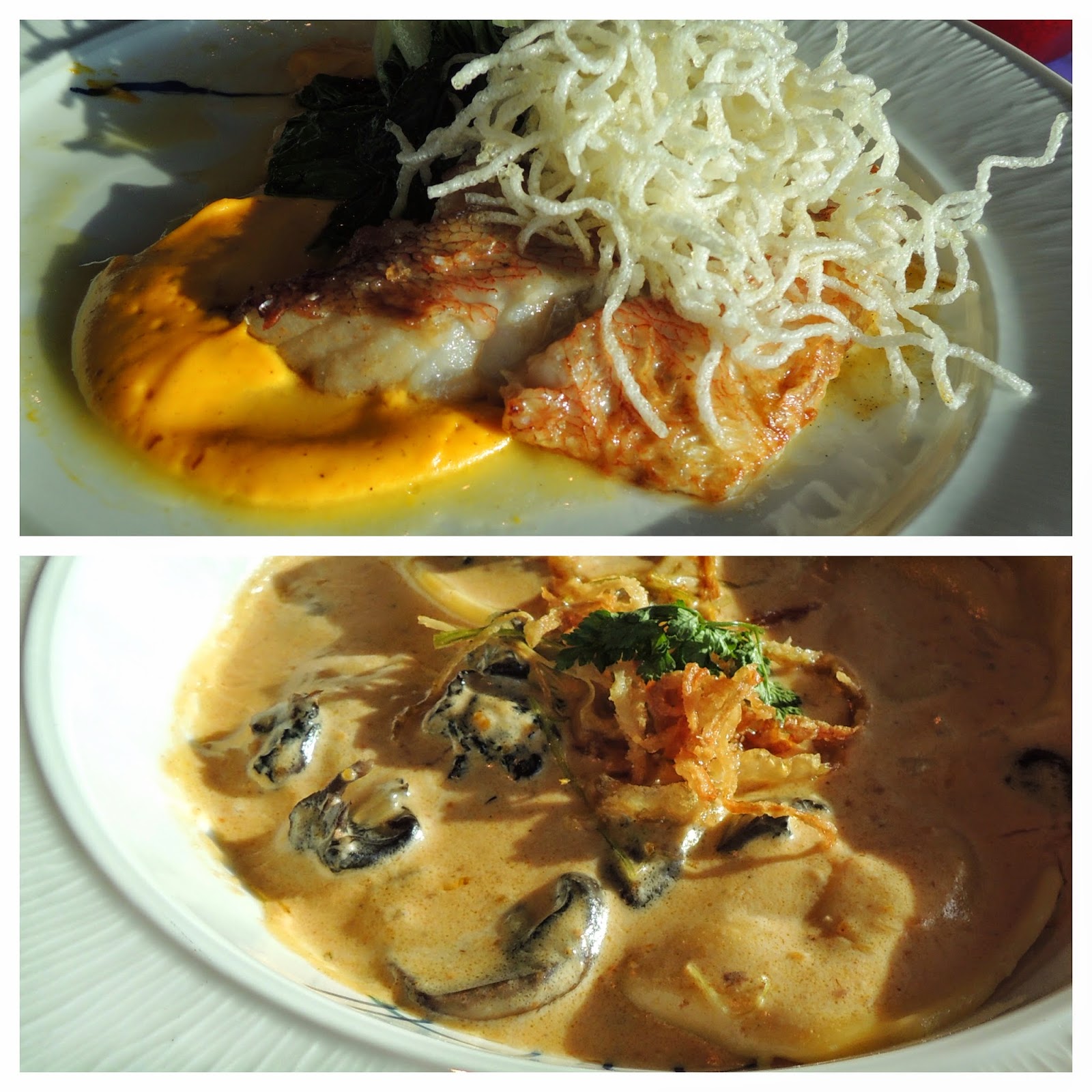 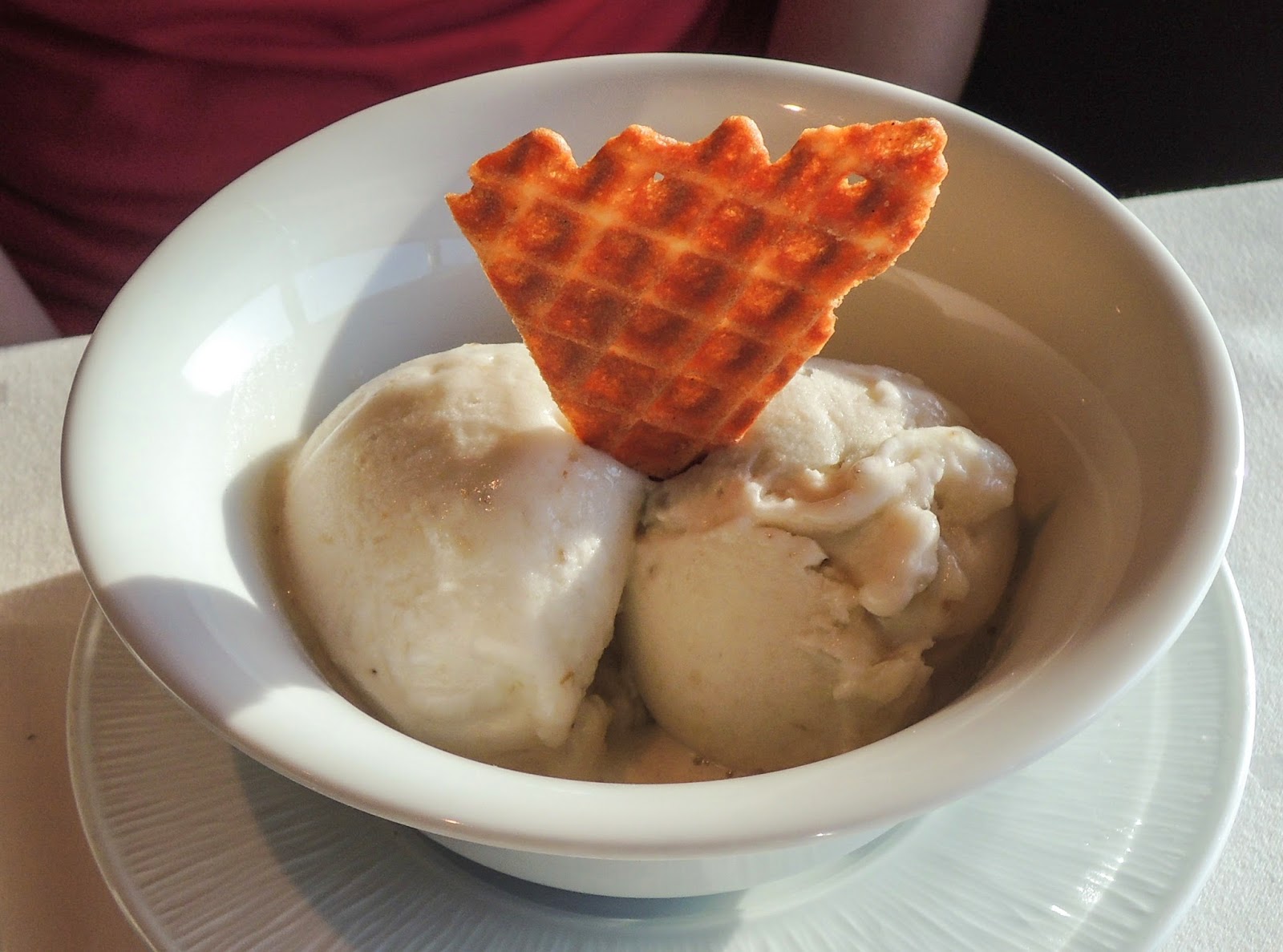 For dessert we ordered a banana sorbet topped with a waffle crisp. This seems to be a trend these days where you freeze really ripe bananas and blend/chop them. You get a consistency of ice cream, and something presumably more healthy than ice cream and sorbet because you don't have the added calories of cream/milk or sugar. Still, a bit too sweet for me but a neat use of technique to fool you out of that heavier dessert.

Great first day at port. We had a good time and the weather was nice and cool (compared to what we would have faced in Texas).