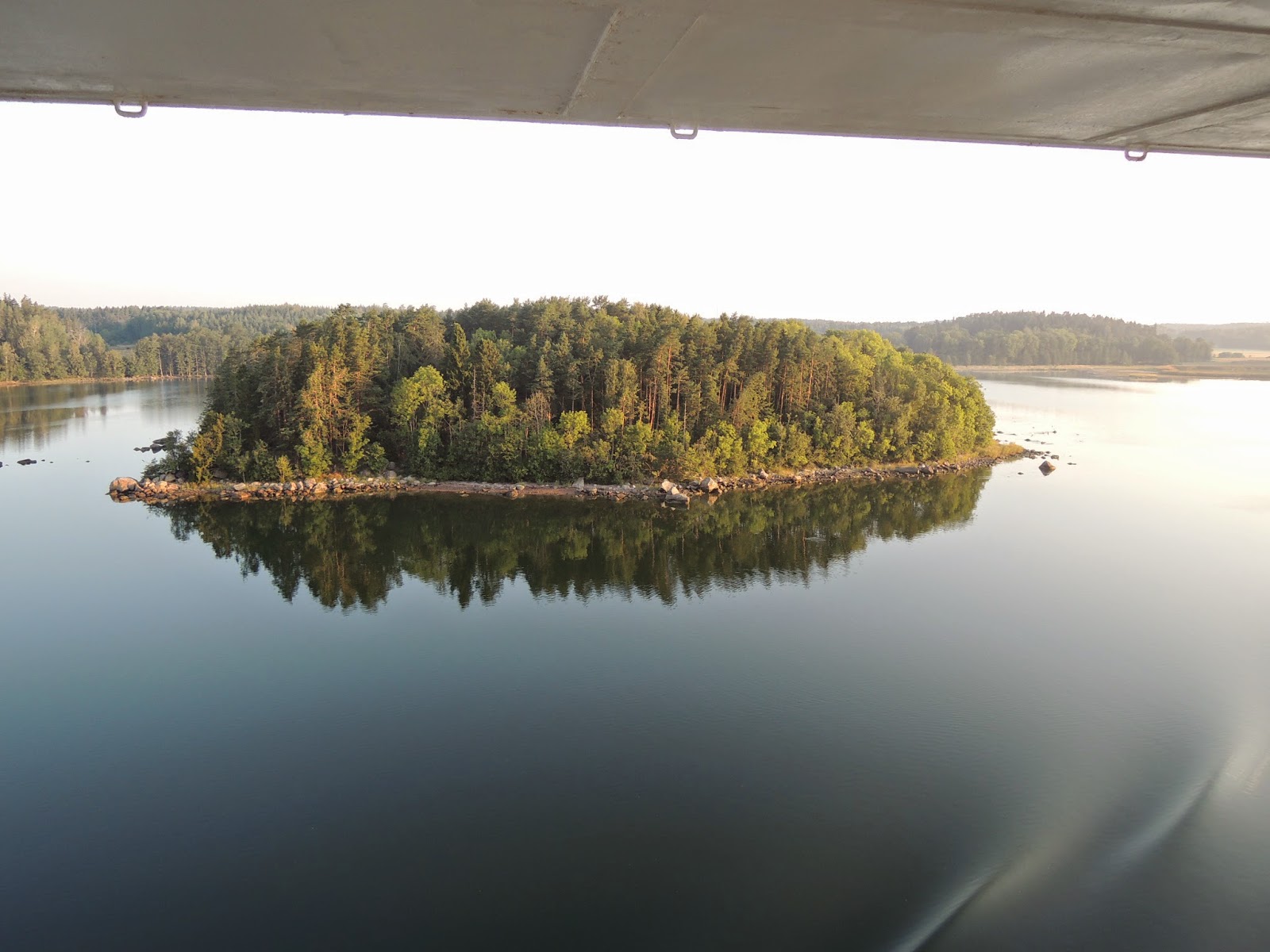 We're rounding the corner home with Stockholm Sweden . We entered the port through the Swedish archipeligos, which was a beautiful site. The Stockholm archipelagos are made up of about 30,000 small islands some of them no bigger than a car poking out of the water some large enough for several houses. We arrived around 6am and it was a very quiet glide through the islands. This shot was from our balcony. 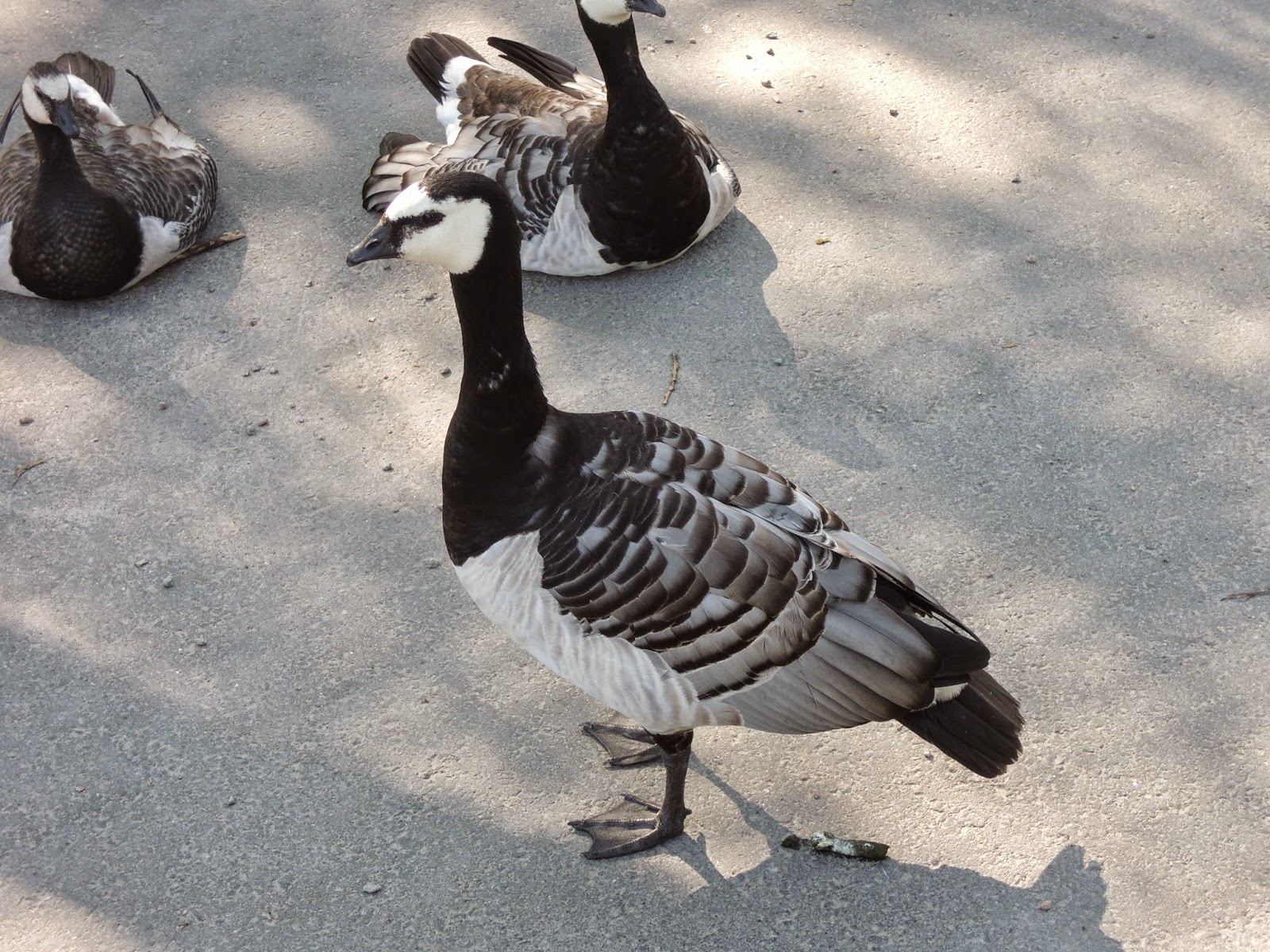 Once in port there were water taxis to take you to various points of interest including an amusement park, the ABBA museum (which I'm a little bummed we missed), and historical district. Since these are the things we missed I only have this picture of a family of fearless barnacle geese to show you. 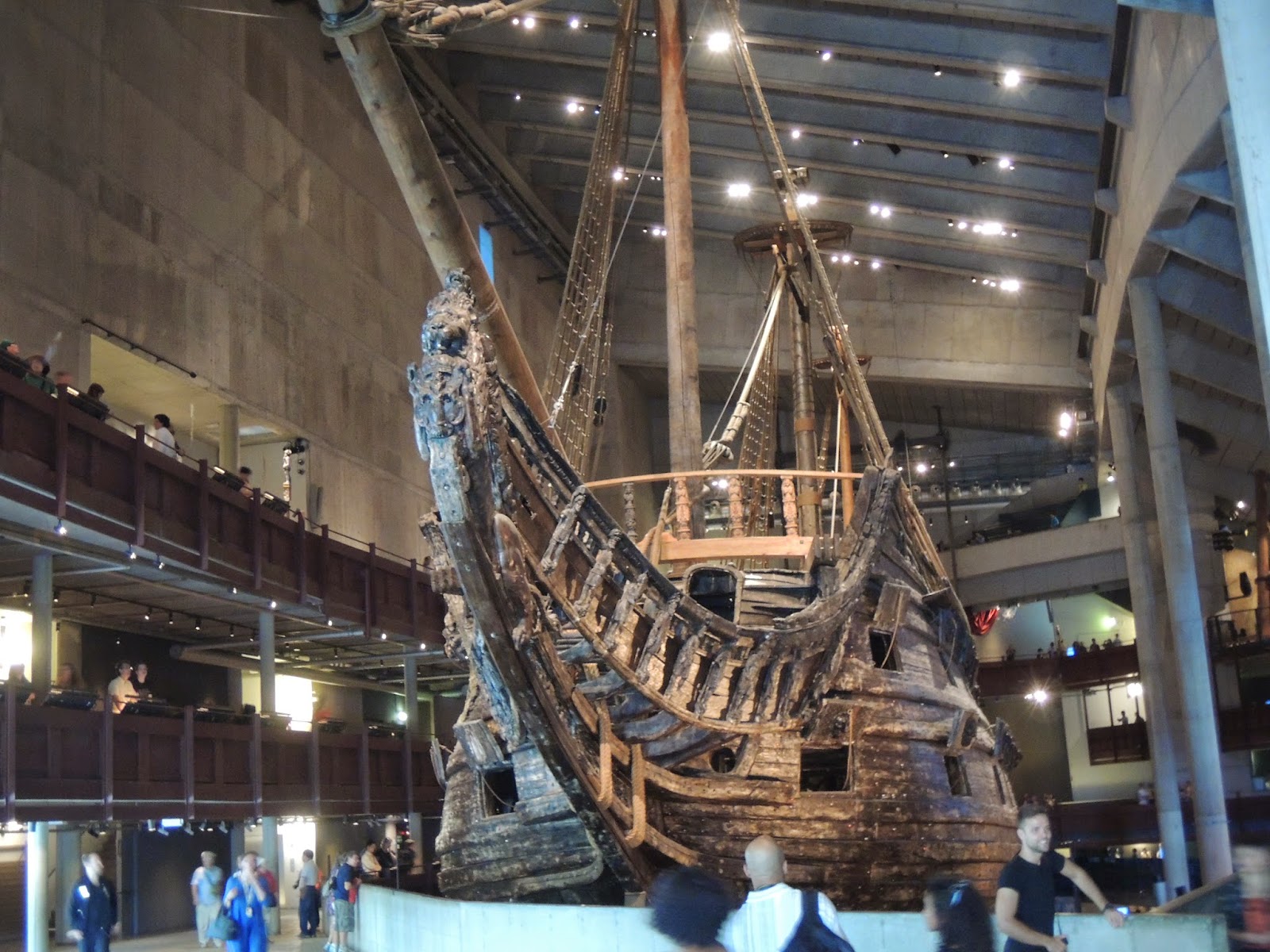 We opted to spend our time with the Vasa Museum. Above is the remains of one of two famous 17th Century warships to herald the greatness of the power of Sweden sea power. Her name: Vasa. 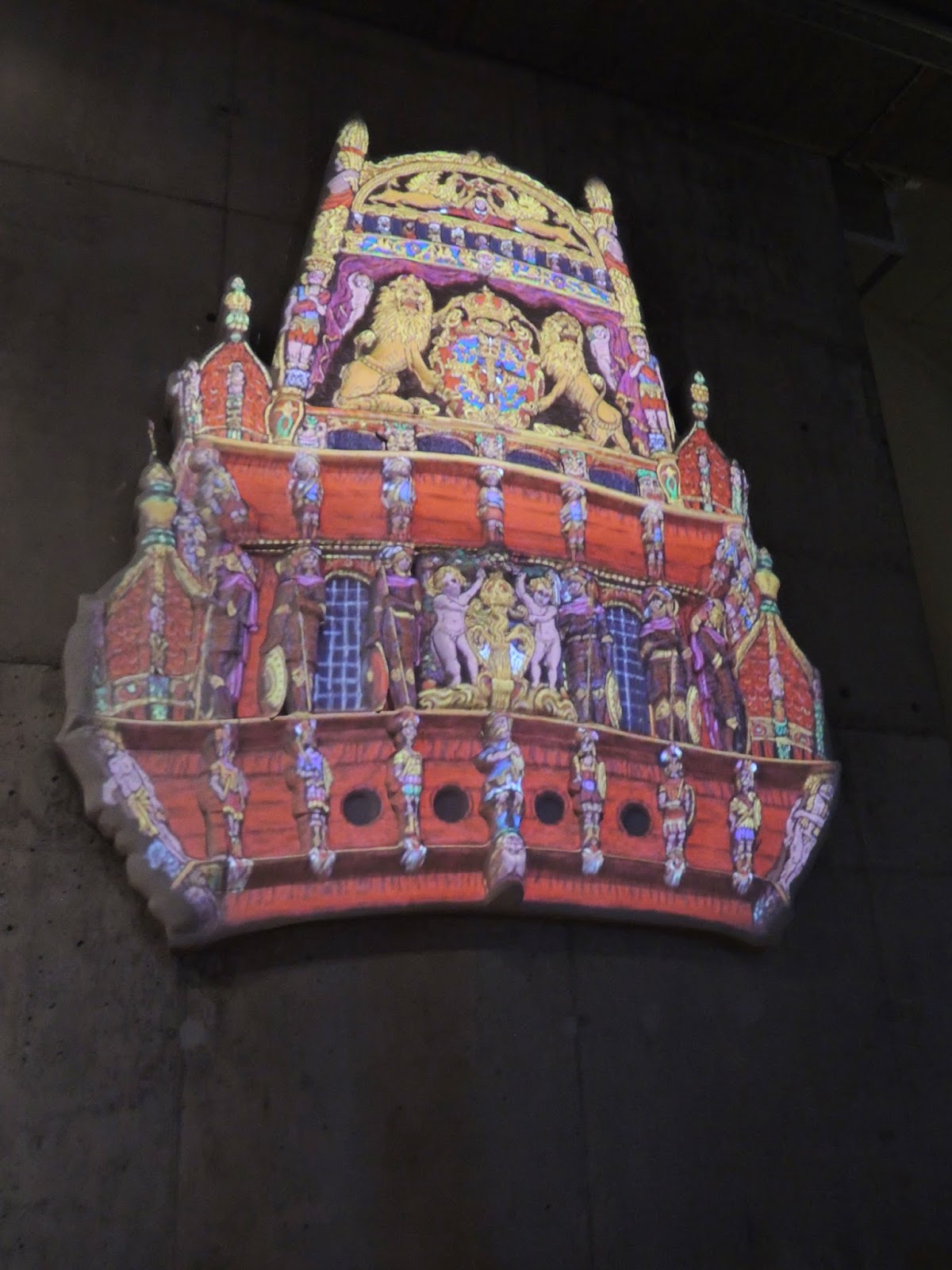 Unfortunately, she sunk within 25 mins of launching out of port. #epicfail #headswillroll (actually no heads rolled). Long story short, the ship's center of mass was too high, this caused it to take on too much water through the gun ports as it swayed from side to side. They did test for seaworthiness but no one wanted to tell the king his new awesome ship was going to sink. Fortunately, the sister ship was corrected and did sail for 30 years until she was blown apart. Ironically, the brackish water and the mud at the bottom harbor actually preserved the ship and it is in far better condition than her sister. The museum is a wealth of information about ship building and what the lives of the sailors looked like and many people have come to study the ship. Just outside the museum was one of the hotdog vendors that a fellow passenger told us to check out. Basically, they take a french baguette impale it to create a hole and squeeze in mustard and ketchup from this cow udder like device (to the right of the guy in the picture). It was pretty good, the crusty baguette was an interesting change from the American bun. 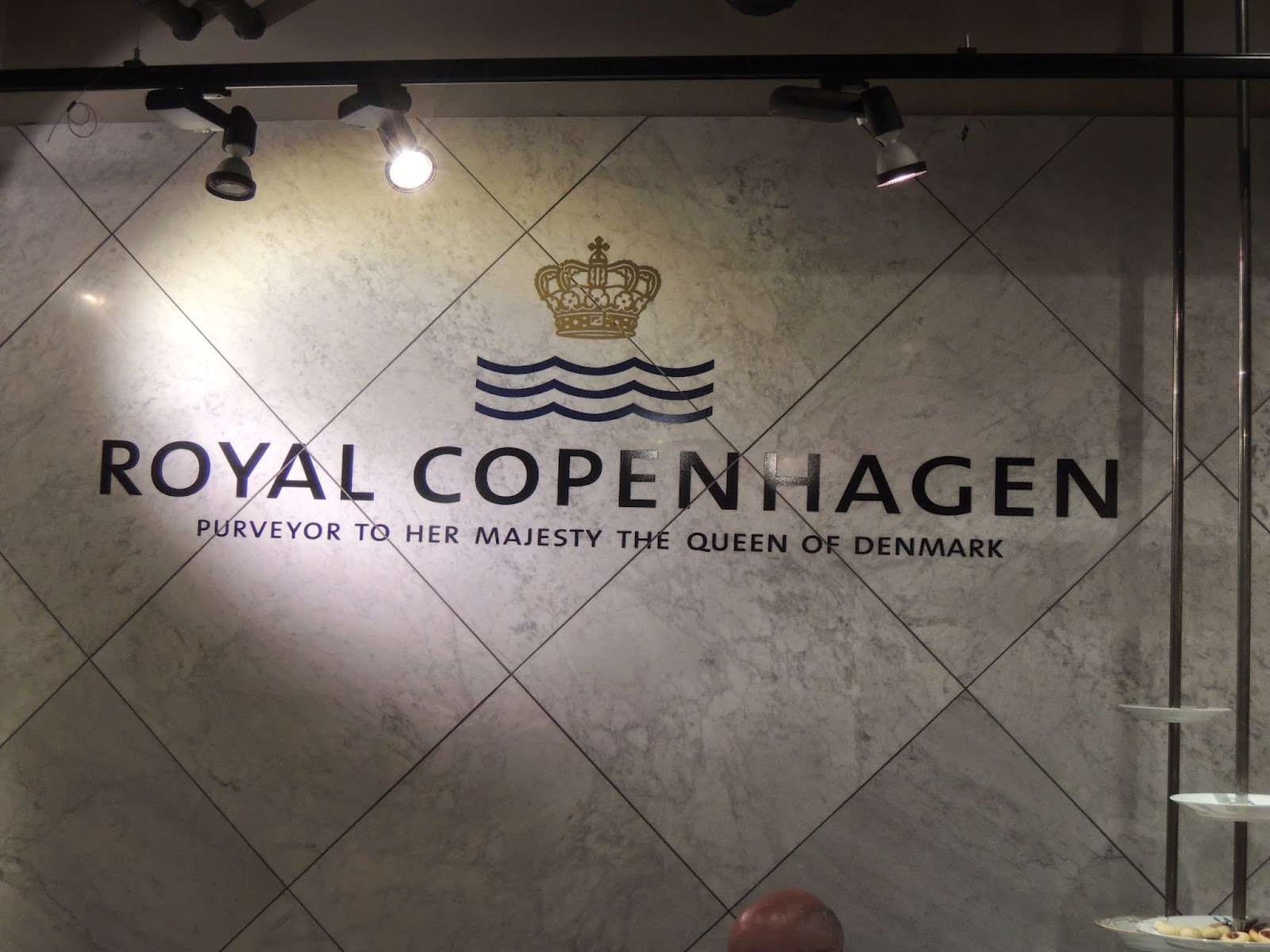 With precious little time left we decided to pickup lunch at the Royal Copenhagen where they serve sandwiches and tea from classically made royal floral china (porcelain). 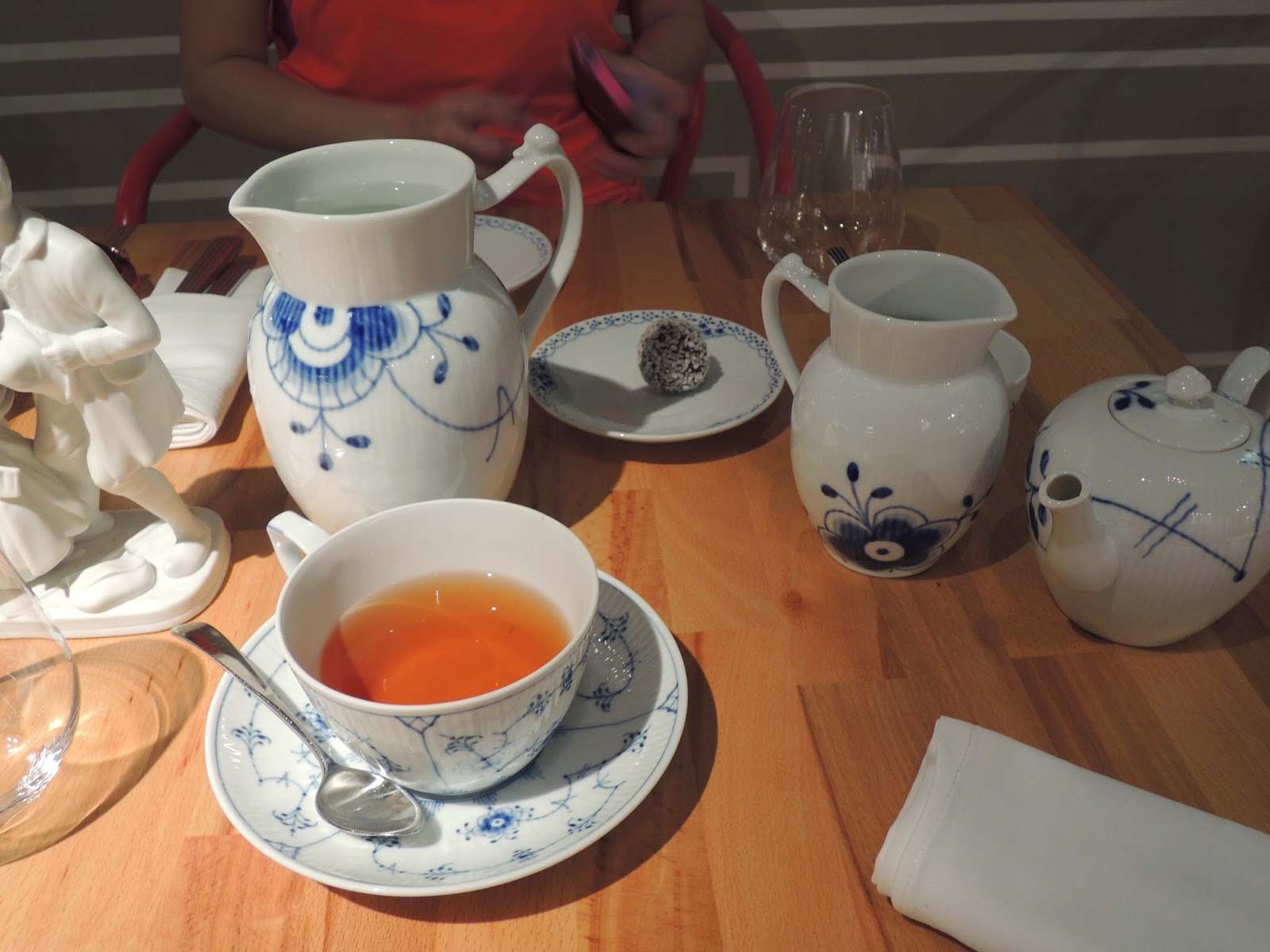 The company was founded in 1775 and commissioned by the Queen of Denmark to replicate the fine dishware found in the far east. Turns out they do a nice lunch and tea. 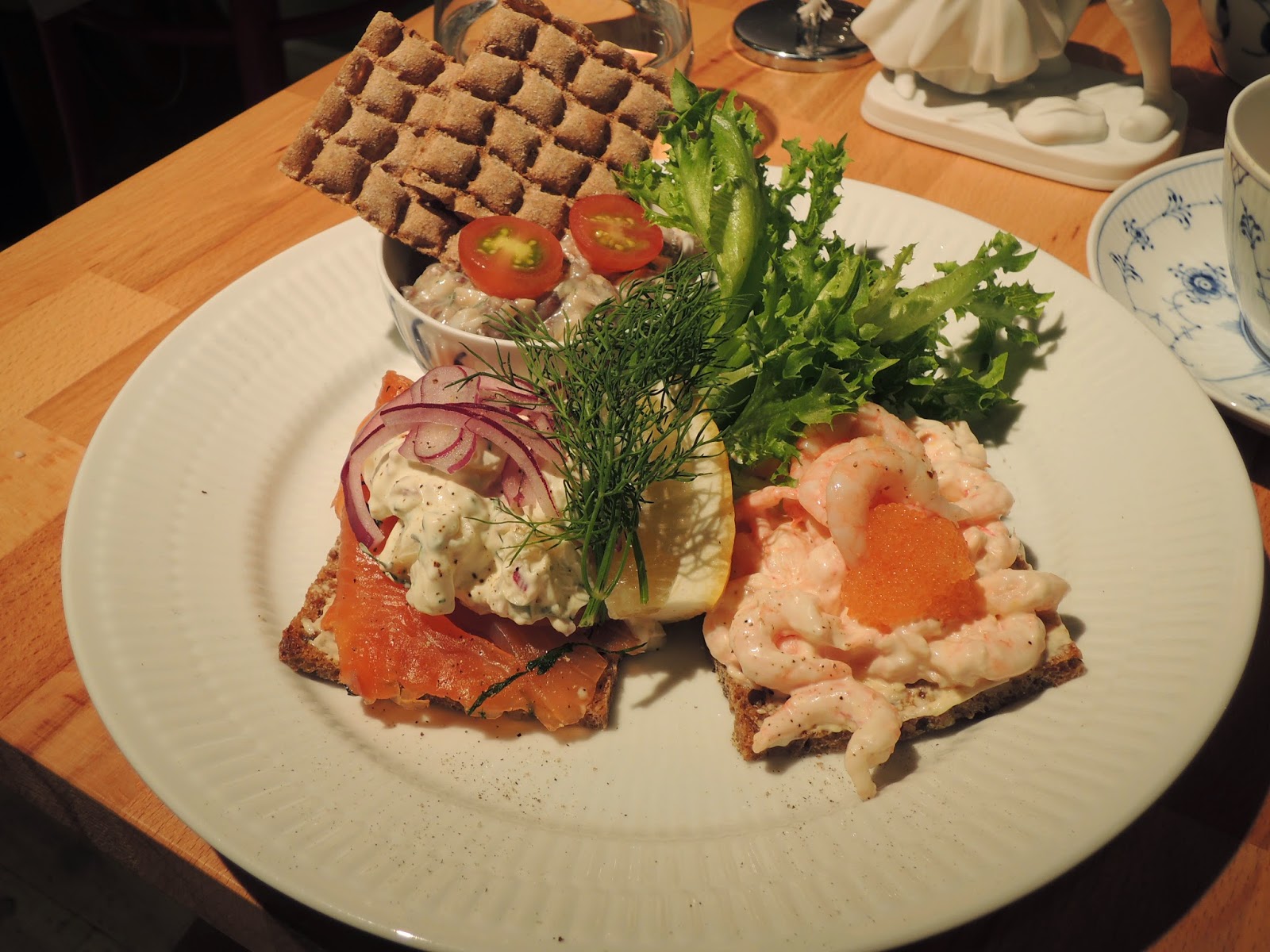 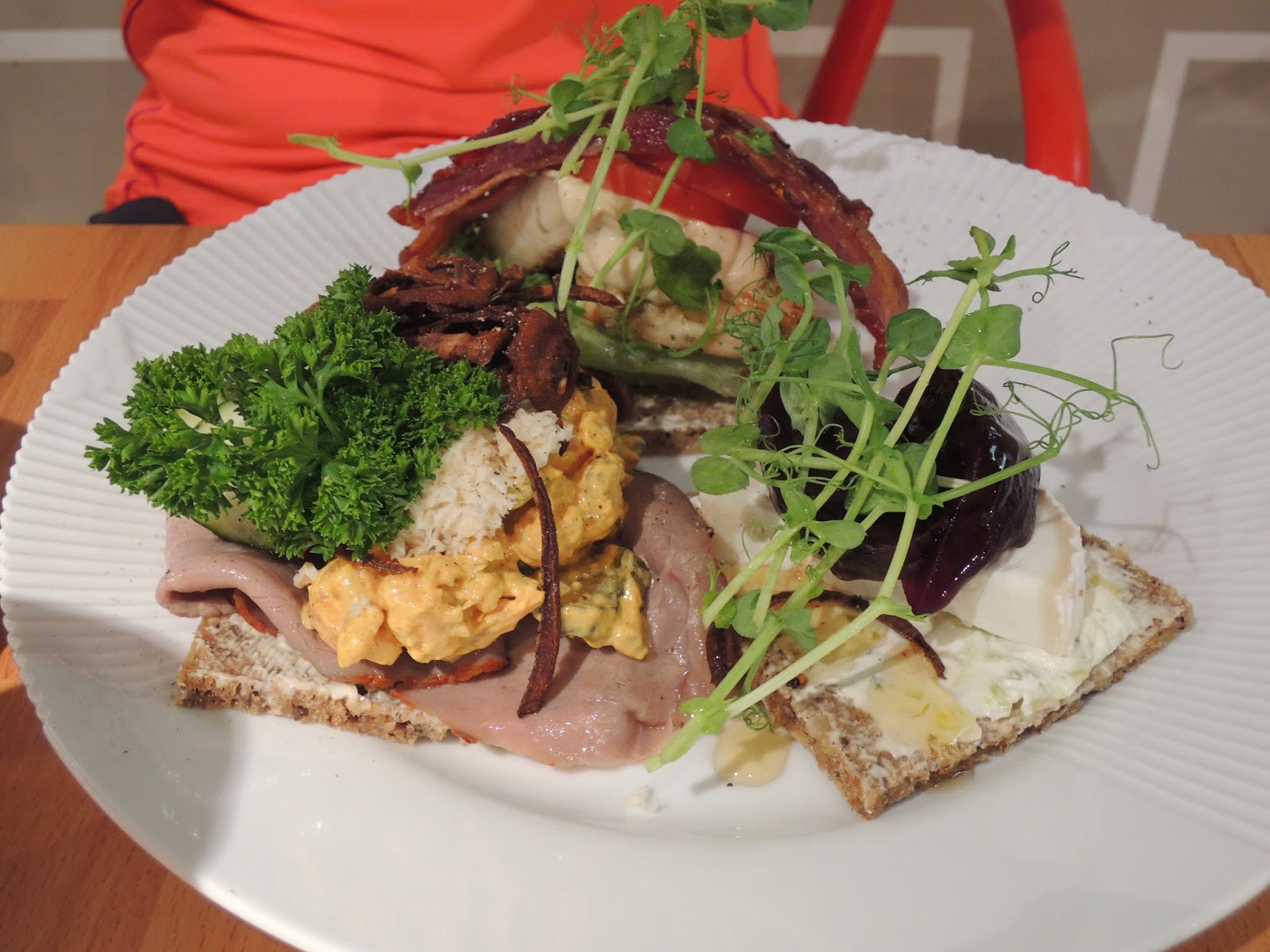 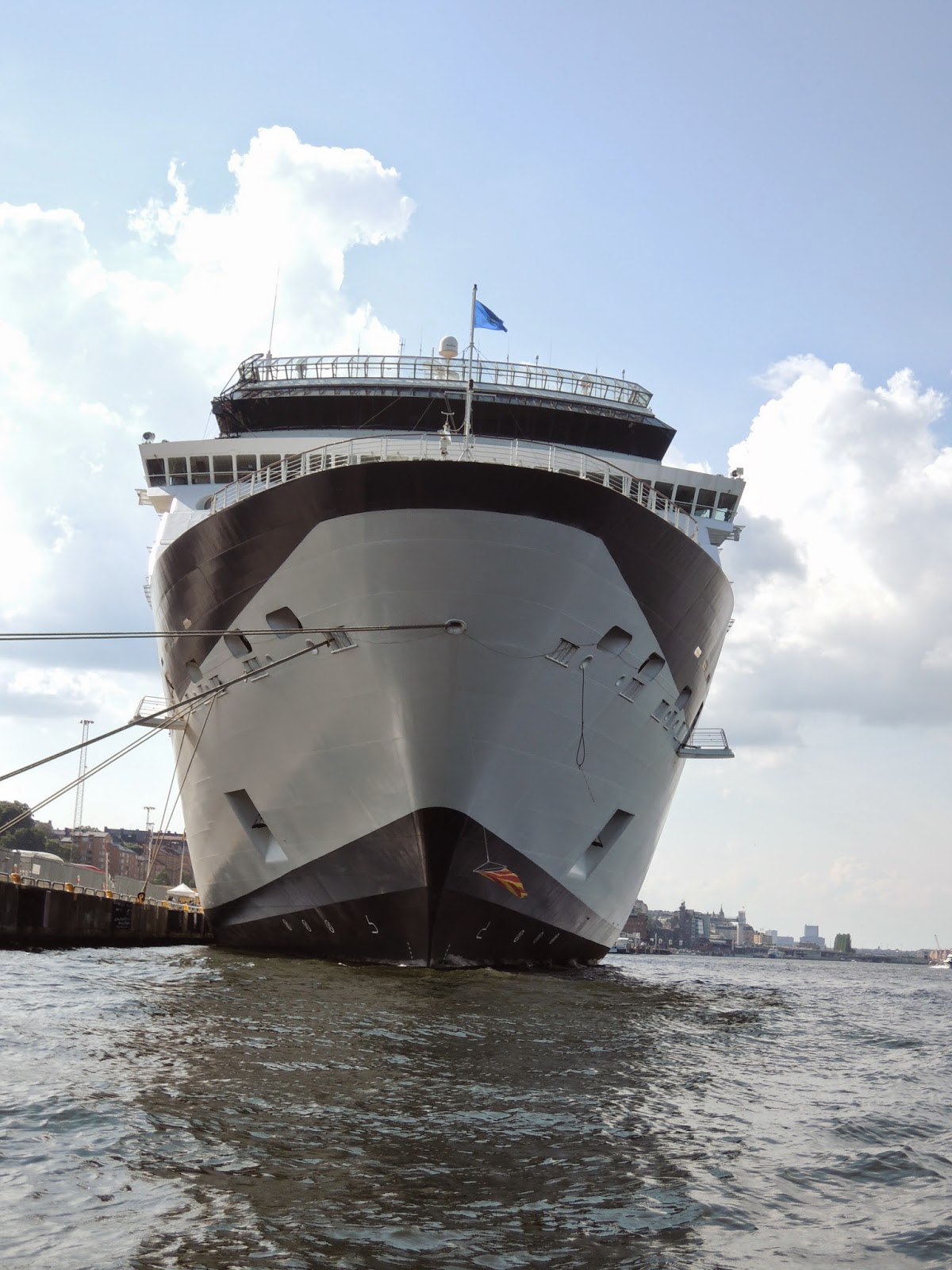 On our way back I got a nice forward shot of our ship. NOOOO it's coming right for us! 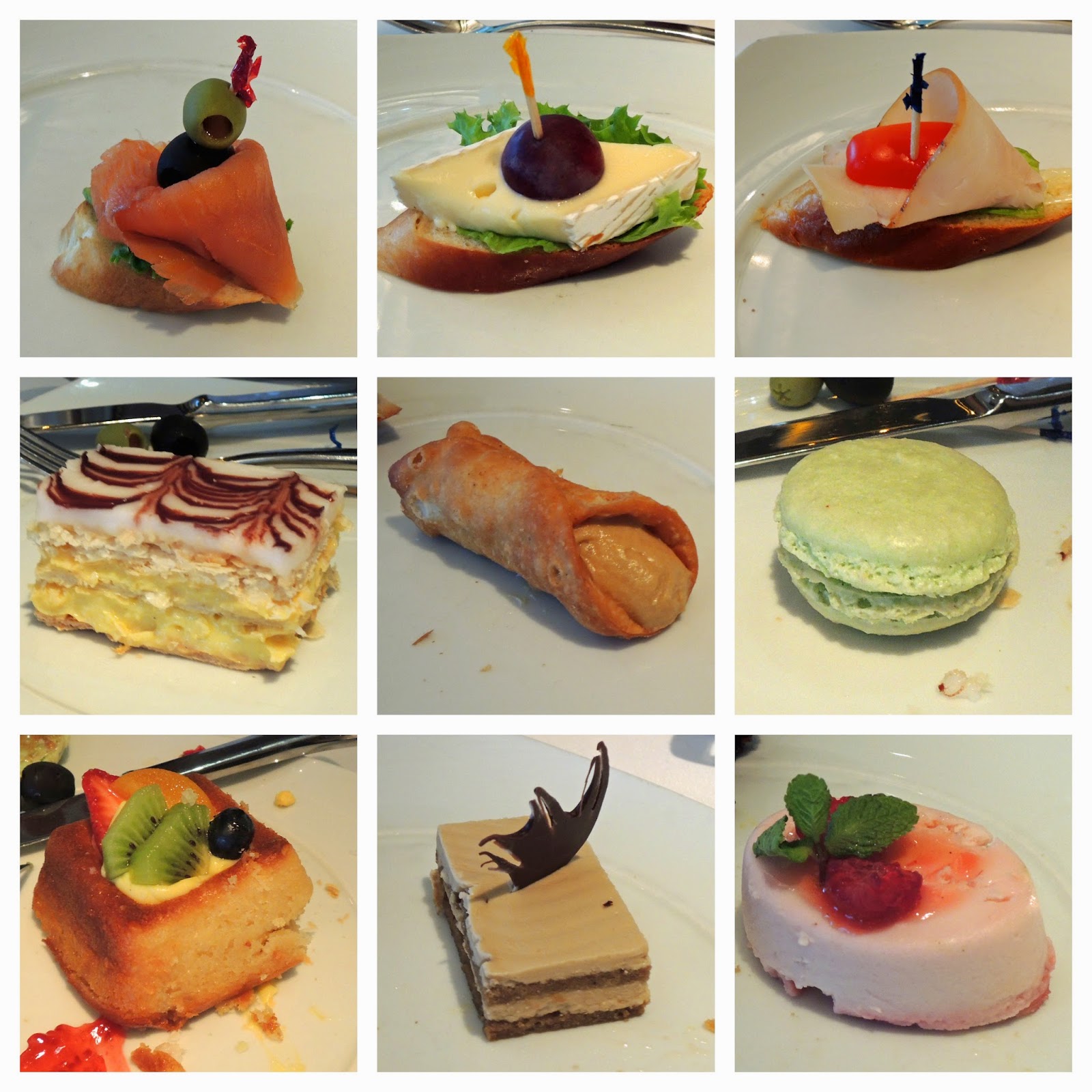 We had a sea day on our way back to Denmark the next day. The executive Chef of the boat took our request for reinstating "High tea" at the Oceanliner restaurant and kindly invited us to the "captains club" tea for the frequent travelers. We had a great time talking to our fellow passengers and it was neat to be in the "cool kids" club.