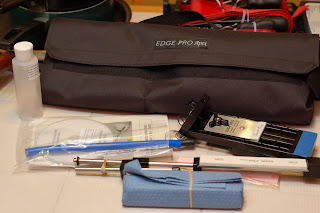 Just a couple of more weeks of bento hiatus since everyone is still out for the holidays. It's been a nice little break for me, time with family and all that. None the less, I've queued up a few themes for the new year so I'm eager to get back to cooking, I do confess that having my Sundays to myself have been nice.

A lot of people ask me what my most indispensable kitchen tool is and without a doubt it's my Chinese cleaver it's usually the only knife I ever use in the kitchen. It's cheap, but more to the point it's the ultimate multi-tasker, it does all the obvious cutting and chopping, but also delicate garnish work, has a huge face making it a good bench scraper, you can use it as a garlic masher, and it's lighter than a regular cleaver, but heavy enough that it does most of the work for you when doing a lot of chopping. And as with every knife it needs care and love to perform at it's peak, which is a nice lead-in to our post today.

Today's post is another gadget post, this time I'm going to go over the Edge Pro Apex knife sharpener. I was introduced to this puppy by Ryan over at Nose to Tail at Home when he had me over for the haggis making party. I had prided myself on keeping my tools sharp and clean, but when I was chopping onions over at Ryan's house it was like cutting butter with a hot knife. He kindly showed me his secret weapon. Unfortunately his secret weapon costs a lot of dough so I had to wait a while before buying it. I tried a few other solutions but realistically this was the best and easiest sharpener I could find.

So what is the edge pro system? Traditionally, if you wanted to put a new edge on a knife you would go thru the process of carefully sharpening your knife over a wet stone, holding the knife at your desired angle and going thru various grits until you come up with a shiny new edge. Then you adjust your knife with with that big steel stick thing in your knife block that people don't tend to use. The Edge Pro Apex turns the whole thing upside down, it's genius really. You take the knife put it on the bench and then you have a arm on a pre-set angle and just scrape the stone over the knife. It just makes so much sense!

As you can see from the first picture it comes with the assembly a ceramic honing rod instructions and the stones. You can get the basic set and the price just goes up depending on the number of sharpening stones you get. In this case I went ahead and sprung for the full monty starting with the 120 grit stone going all the way up to the 3000 grit diamond tape. Over the top? Sure a bit, but if I'm gonna do it I might as well go all the way.


I went ahead and setup the sharpening system and testing my cleaver on a paper test. If you've never done this it's a nice test on checking sharpness, grab a standard sheet of paper, hold it vertically in front of you, now take your knife and run it down the top edge, a sharp knife should slice into it easily (and smoothly). As expected my knife was ridiculously dull, it only really nicked the paper and bent it. So I set about going from the lowest grit stone (I obviously needed to reset my edge) moving my way up. Between stones, I would wet the stone to make going over the knife a bit smoother.

As you can see even with the 1000 grit before and after shot, I was clearly taking off a lot of steel to get the edge to the nice 18 degrees that my research indicated was my optimal edge. There are whole blog entries and websites that tell you all about the science of sharpening knives so I'll spare you the details but if you want, go here to read more about it. After all my hardwork my knife passed the paper cut test with ease.

I highly recommend the Edge Pro Apex for your knife sharpening needs. It's that or knowing someone that has an Edge Pro and begging them the favor of using it. Either way, a sharp knife is one of the best if not safest things you can do in maintaining your kitchen gear (and fingers).

Ironjack said…
Well I use the knife steel from my knife block before every use. A major sharpening doesn't happen unless I feel like the blade has become too dull of to benefit from the the steel.

I believe from my reading the honing rod/steel helps bend the steel back into shape if it's slightly misaligned, but when it's really out of line the knife steel is not effective and then it's time to bust out the sharpener.

So to answer your question: It depends ;) yeah that's a cop out answer. But it really does depend on how often you use your knife, what all you're cutting, your cutting technique (slicing does less harm than chopping etc), and of course the surface (AVOID GLASS CUTTING BOARDS)

Jodi said…
Awesome. When can other food bloggers come over and get their knives sharpened by that bad boy? My knives are sad and dull.
December 29, 2009 at 2:30 PM

Ironjack said…
I should just have people over and have a sharpening party... wait, sharp knives, drinks, party, um. maybe a bad idea :) how bout I add some waivers at the front door.
December 30, 2009 at 11:13 AM

Carl said…
There should be a logical order. Sharpen knives > test knives by slicing limes > put knives away > make Mexican Martini's > enjoy!
December 30, 2009 at 11:29 AM

Ryan said…
Lemme know, and I'll bring my sharpener too!

Ironjack said…
Ah ha dual sharpening goodness. Well I did just clean my house. How about next weekend (not new years weekend)?
December 30, 2009 at 8:46 PM

Ironjack said…
"bluntly" speaking you all may come as you are I'm not fancy :)