Fall is Back in the Air 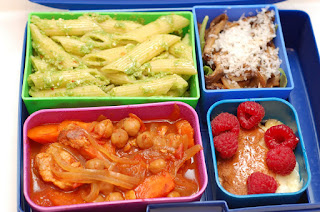 Not really any good cohesive theme today. These are a few of the dishes I've had on my list of "gotta try" that say fall to me. It's gotten cold and dreary lately and what better way to warm the bones than with some stews and soup.

Let's start with the main dish, Chicken and chickpea stew. Its a nice blend of spices and vegetables, more reminiscent of a thin curry with more going on than I usually attribute to a stew. The carrots provided a bit of unexpected sweetness to the overall taste. The original recipe called for chicken thigh, but in the interest of trying to cut back on fats I went with chicken breast, in hindsight this may have been a mistake because the chicken thigh would have produced a more flavorful stew it was a call between health and flavor we'll see what the jury has to say about it.

Here we have a nice Penne pasta with Green Pea Pesto. Usually that much basil pesto would really turn me off of a dish, but the green peas really sweeten and lightens up the pasta and toning down some of the richness from the cheese and olive oil. I didn't have to use as much oil to get the pesto together since the peas provided plenty of moisture. I never considered using pea as part of a pesto, but this would be a great spread atop a bruschetta or even stuffed in a ravioli, probably a lot healthier.

This next dish is courtesy Dai Due Supper club, they shared their recipe with the local paper and I've been saving it because it looks so simple and delicious, perfect for a fall feast. It's a roasted oyster mushrooms with arugula, champagne vinaigrette and some fresh gouda. I didn't have the luxury of all of the great farm fresh items as with Dai Due, but the dish was great none the less. The arugula's peppery taste was a great way to finish the smokey earthy taste and textures of the roasted mushrooms. I happened to have some bread on hand and tasted the oil after roasting with the mushrooms and it was fantastic.

For a soup, we have a Ancho Roasted Butternut Squash soup, this really speaks fall to me. The slight heat from the ancho peppers and roasted squash just warms you up. Heck, just looking at it and it's golden brown color warms me up. Again, quite a few vegetables and spices to bring this soup together. Surprisingly, despite it's rich taste there's very little fat and oil in the soup only a drizzle went into roasting the squash.

Dessert might have been the only somewhat "bad for you" part of lunch. I saw this recipe for a Buttermilk Pudding Cake with maple raspberries. How is it with the same batter you have cake and pudding at the same time? I was in disbelief and set about making the dessert. Sure enough cutting into the cake/pudding the top was a very light fluffy cake and near to the bottom was more of a pudding like texture. The maple syrup and the raspberries add nice flavors to the cake's texture and together you have quite an amazing cake/pudding.

I had a great time putting together lunch for today. I was sure that my prep the day before would have helped me cut a bit of time, but I suppose churning a 14 lb turkey out in the middle of making bentos does put a cramp on the time management. Anyhow, one more bento before the holiday season starts. Stay tuned!
chilled soup fall mushrooms pasta raspberry stew

Carl said…
Would it be possible to get the secret recipe for the Ancho Roasted Butternut Squash soup?

Ironjack said…
You got it:
ANCHO ROASTED BUTTERNUT SQUASH SOUP
By: Rachel MacIntyre of the Friendly Kitchen
serves four - six

Jack's notes: Skipped cream/yogurt to cut fat/calories. More cumin (kinda depends on squash size) next time. Added some red pepper flakes to get a little touch of heat. Go with Blender/Blendtec for smoother consistency next time.

1. Preheat the oven to 425 degrees. Line a sheet pan with foil. Slice the butternut squash in half, lengthwise, and lie it, cut side down, on the lined sheet pan. Pop it in the oven and bake for about 40 minutes or until the squash is very soft. Pull it out of the oven and allow it to cool while you start the soup.
2. In a large pot, heat the olive oil over high heat. Add the shallot, garlic, carrot, and celery and saute until the veggies are a bit browned and beginning to soften. Season with about 1 tsp. of sea salt and cumin, and add the chicken or veggie stock.
3. While the soup is coming up to a simmer, scoop the seeds from the squash into the trash (or the compost bin:)) and scoop the meat of the squash into the soup. Toss the skins of the squash into the compost bin. Tear the softened chiles into pieces and add them to the pot. Stir in the corn, cover the pot, and lower the heat to a simmer for about 10 minutes, or until all of the veggies are very soft.
4. When all of the veggies are soft, remove the pot from the heat and puree the soup. You can do this by either sticking an immersion blender right into the pot, or by transferring the soup to a regular blender and blending until smooth. Check for proper seasoning and add more salt if it is needed.
5. To serve, ladle the soup into individual bowls and garnish with cream, pepitas, and cilantro. I usually eat this alongside a light mixed green salad and a piece of gluten-free cornbread. But, your favorite warm, crusty loaf of bread would be great with this as well.
December 10, 2009 at 3:07 PM