Haggis it's what's for dinner 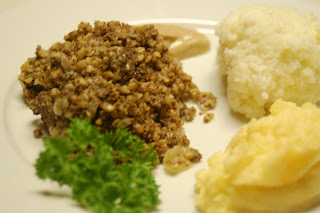 Ok, if I've not earned my stripes as a hardcore foodie, then I most definitely earned them last night. I present to you my adventure of making Haggis, no it didn't go into a bento so no haggis in a box. To get the full effect of how this transpired (and to earn the tag yammering) we must start our story from the beginning. My wife was away for the weekend and a coworker was in a similar situation. He suggested that since we're both adventurous with food we should do "some foodie thing". It didn't take long for him to further suggest we make the delicious treat we had in London, Haggis. I tweeted and searched high and low in an effort to find the ingredients for the weekend. Ultimately Addie Broyles from the Austin American Statesman suggested I contact Ryan over at Nose to Tail At Home. Ryan kindly replied with some mixed news. The bad news is the only way to get all the ingredients is to see a butcher in Weatherford, TX (a good 3+ hour drive) even then you don't get the sheep lung (illegal in the US). The good news is that he's already got all the stuff ( minus the lung) and has been meaning to cook haggis as part of his cooking adventure and he would welcome the help and company . Done and Done.

Dear readers, below is not for the faint of heart. You might just want to skip to the end. But where's the fun in that? Onward!

I arrived at Ryans noonish (I got lost) and after a bit of introductions and "what do you do?" "Oh yes Alton Brown is my hero too" "Oh you need to read this" "hey check this out" "did you know about" we set upon our task of making Haggis. Step one: Need to finish thawing the stomachs. What you see at the left here is five pounds of sheep stomach. Apparently you can't buy them any smaller than that. The other pictures show the vacuum sealed liver, kidney and yes brain. mmm brain.... People often ask me "eww.. how can you eat that?", my simple answer is "I'm asian, we eat everything" but truly the more appropriate answer is that I've been brought up to try everything at least once and I wouldn't be much of a foodie if I didn't.

Step two: wash up everything put it all in the pot and boil it, for two hours! Chop some onions.

"Oh crap!" half way thru we forgot the sheep hearts! Doh! Quick get another pot going we can recover. The pictures shows something like eight hearts all frozen together. Fortuneatly we had some time with waiting for the other pot to cool to get caught up with the hearts.

Finally let that cool and then chop it into chunks so that we could then grind it down. Ryan's kitchen aid was a trooper. We weren't sure that it would make it thru when it came time to grind out the suet, there were moments of electrical smells and the poor machine just trying it's hardest to power thru. In the end no appliances were harmed in our procedures.

Now I've never actually worked with suet before it's different than any other fats I've worked with in that it stays solid even at room temperature. Usually chicken or beef fats are not rock solid when it's as warm as room temperature. This proved to be a big challenge to the grinder but ultimately necessary as we had more uniform fat distribution than if we had chopped it in the food processor. For the uninformed suet is the fat found around the loins and kidneys of beef or mutton.

The rest of the process is pretty boring. Saute some onions, toast some pin head oats. Mix it all together and drop in some salt pepper and allspice. Last but not least a bit of stock to moisten things up so that when the oats cook they have some liquid to absorb. Here's a nice action shot for you of me mixing everything together in the giant stock pot. This is a lot of haggis, fortunately we had an army of folks coming over to taste. Oops they all dropped like flies, ok well fortunately there were four of us (eep). We ended up with enough for at least 20.

Now the fun part. Stuffing! Sheep stomach is easily torn so we had to carefully open out a pouch. The picture above is the haggis I stuffed. After stuffing you tie the whole thing up and voila haggis. Ok, uncooked haggis, but haggis none the less. We hit another "oh crap" moment after the second haggis, "we forgot the brain!" We decided to spin it as, "well now we can have two flavors of haggis traditional, and with brain".

In hindsight we needed either less liquid or more stuffing as the haggis with the brain was very liquid-y and the consistency was not as good. I think everyone decided haggis without brain was better than with. It wasn't bad, it was just different tasting and most preferred the taste without brain. In the picture you see our foil wrapped little bundles of joy. We then proceeded to cook these monstrosities for three more hours. Yes that's five full hours of only cooking/boiling time. Fortunately, Ryan had a healthy selection of scotch and a nice DVD selection for us to while the time away.

I don't think my photos completely convey exactly how big these haggises were. So here's a picture of one of them being boiled in a full soup pot. And of course a shot of the finished product (no brains) cut open in the traditional cross as specified by the book.

We mashed up the potatoes and rutabagas that I brought over and served the haggis per the book with a side of dijon mustard. The mustard was perfect addition, it added some zip and tang and help cut the liver taste (for those that don't like liver). Now I know what you're thinking: "What?! That's disgusting don't eat that!" I would only say give it a try before you discount it. It's very delicious and the texture of the oats made it fun to eat.

A big thanks to Ryan for letting me participate in such a unique event (and sending me home with a haggis and extra sheep stomach). I had a ton of fun and we'll collaborate again sometime in the future. Ryan's a great guy and knowledgeable cook. We traded some great war stories (as well as created our own) in his kitchen. Would I do this again? Sure if I had all the ingredients. Would I do it tomorrow? uhh... no thanks.
collaboration event foodie haggis offal potatoes scotish yammering

I haven't checked in on this is a bit, but thanks for not making us eat Haggis. I usually give everything you fix a good go and almost always devour it all, but I think haggis would have been the line for me.

It has been a pleasure having Bentos at work and I thank you for sharing your talent and for broadening my food horizons. :)

Ironjack said…
Hey Holly, Thanks for dropping by. A rare treat for one of my eaters to comment. I'm very glad I've been able to introduce you to some new foods, hopefully it has embolden you to try some new things while out eating out. You should give haggis a try :) it's actually quite tasty.
June 2, 2009 at 3:37 AM

Kay said…
This sounds like so much fun! I'm a "try it at least once" kind of girl and the ingredient list for haggis doesn't scare me. Of course, I wouldn't drive 3 hours to procure the goods, though. LOL
July 8, 2009 at 3:49 PM

Ironjack said…
Hey Kay! thanks for dropping by.

You can actually get most of the ingredients in Austin. The farmer's market on 4th street has a lamb vendor that sells lamb hearts and liver. Suet can be obtained from one of the other vendors.