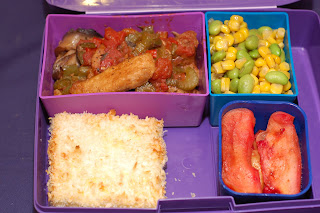 Yes it's that time of year, everyone is going on vacation and holiday so I'm shutting down operations until the new year. It's a good time for me to recuperate and have a small vacation from my Sunday cooking. I'll be posting some stored up posts over the next few weeks, gadgets and talking turkey so stay tuned!

I kept today's meal fairly simple because I was limited on time, but I also wanted to focus on each dish. Most of the bento was gathered from various issues of Southern Living that were laying around at my doctor's office. The recipes were all *almost* there meaning all great starting points but looking down at the ingredients they didn't look like they would taste remarkable in anyway.

For the main entree we have a Portabello Pork ragu over Panko crusted Parmesan grit cakes. I re-worked it a bit and played with some of the textures and the spices because I wasn't quite happy with the results. The grits were a touch too bland for the for the the pork and the quantity was entirely too much. The ragu called for baby portabello (or otherwise known as crimini) mushrooms, I went with full sized portabello because I liked the idea of large meaty pieces that can offer a texture alternative to pork. I also spiced up the pork with some red pepper and basil because I needed to compensate for a fairly bland grit cake. I think re-heated together it's a nice balance of flavor and texture.

Next we have a nice side dish of corn and edamame sauteed in house cured bacon and shallots. I swear everything is better with bacon and this is no exception. The flavors of sweet corn offset with the salty "pop" of occassional pieces of bacon are just perfect together. I'm glad I had some of my homemade bacon on hand, it allowed for larger cubed pieces of bacon rather than thin small pieces from the store bought.

Finally dessert was a simple cinnamon baked apples with raspberries and honey. I had some leftover raspberries and thought that the slight sour taste would be a good contrast to the honey. Added a dusting of nutmeg because it seemed like the right thing to do. It's like an apple pie, without the pie.


This was a great way to finish the year and I'm looking forward to starting back up in a few weeks. I've already got a few menus planned and will no doubt have a bunch more as I go thru my stacks of magazines that have been piling up in my inbox at home. Happy Holidays everyone!
bacon pork simple southern

writingweb said…
Tim brought home his box and we shared it for dinner tonight. Everything was really good, and I love the texture of the grits--it made a great starchy base for the flavorful ragu.
December 14, 2009 at 7:49 PM

Ironjack said…
@writingweb Excellent! I'm very glad you enjoyed it. I'm looking forward to the new year's bentos I've got some cool themes I want to work on, hopefully Tim will share them with you :)

@Julie Yeah the grit cakes were extremely easy, used some quick grits, the parmesian helped bind them into cakes when they chilled. A quick egg bath and some panko and stint in the oven (425 F I believe)and you've got some very tasty stuff. Great easy filler to dress up any dish.