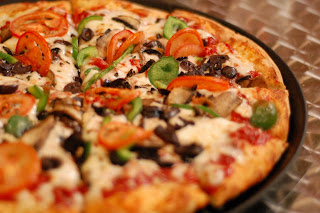 The folks at Promise Pizza invited a few of us over to tell us their story and dish out their pies. Promise Pizza literally started out of a garage of one of the owners where they set about perfecting their pizza recipes. The thing that really sets Promise pizza apart from your run of the mill pizza joint is that they are focused on natural and organic fresh pizzas. This required quite a great deal of research, trial and error, but a well fed neighborhood no doubt appreciated their experimentation. From their company owned fleet of deliver Smart Cars to building their facility according to Austin Green Building certification, Promise pizza has a second mission of social responsibility. This includes their cooking facility, equipment, and even offsite facilities (more on that later), a lot of thought and planning went into building the identity of this "more than meets the eye" pizza parlour.

Our kind host was George Cordeiro, one of the four owners of Promise Pizza (we dubbed them the four dudes). He had a wealth of information on not only the struggles and history of Promise Pizza, but also the ingredients, equipment, and effort to turn out quality pizza pies. He explained that all of their utensils, cups and plates are all recycled or bio degradable materials. Everything is all natural here which includes the sodas which are made with real cane sugar rather than the regular fructose. They even have a naturally brewed ginger ale, which was quite tasty.

We started out with a couple of appetizers, stuffed mushrooms and jalapeno poppers. Promise pizza offers both gluten free options as well as vegan options. Both of these appetizers are gluten free. I believe they are working on vegan versions using their special vegan cheese. Very tasty, I think both stuffings were simliar only differing in the delivery vessel. Also up were the garlic cheese sticks, these were delicious a good amount of garlic with a nice thin crust so you didn't feel like you were filling up with bread.

I took a great interest in their equipment (being the gadget geek that I am), in order to conserve energy and reduce their carbon footprint the folks here at Promise invested in some higher end energy efficient equipment. For instance, pictured to your right is their pizza oven, it forces hot air to cook the pizza via convection (as opposed to top down cooking). The net positive, as explained to us, cooks the pizza faster but also forms the crust quicker to prevent oil from pooling at in the middle of the pizza as evidenced by our not so greasy recycled plates.

So pizza can really be a religion, there are lots of points of view and everyone believes their favorite pizza is the best. Thin crust vs thick, sweet vs garlicky sauce, big pepperoni or tiny coin sized ones, floppy and foldable or crispy and the list goes on and on. For the record, Promise pizza serves regular crust pizza with a slightly sweeter sauce. All of the ingredients are very fresh, someone even commented on how fresh the portobella mushrooms looked on the veggie pizza. I think the real standout here is the fresh ingredients that and the cheese.

You know that stringy, gooey cheese falling of that amazing looking piping hot pizza you see on the commercials? You know the one, it's the opposite of the one you stare, with a great degree of disappointment, sitting on your plate. Whatever the formula they use, they got it right, the cheese was almost absurdly stretchy and there were strings of cheese all over the table even after the pizza had sat for a while. George attributed this to the creamier consistency of the organic cheese as well as the blend of provolone and mozzarella.

Gluten free menu offerings are becoming more and more prevalent these days. I'm glad to see they are offering gluten free pizzas, having done my time it's hard to resist the siren call of pizza. Of note, they only sell the GF pizzas as 8" personal pan pizzas. The pizzas were quite tasty but as with most gluten free options, it's pretty obvious that the crust is not quite the same. The crust was a lot crispier and lighter, almost cracker like. I think the use of ingredients to overshadow the crust was a wise choice. They made it a point to serve the gluten free pizzas last since they have to fire a special oven for the pizzas to insure no gluten contamination. The GF pizzas are prepared off site and cooked at the store. It's good to see that not only do they offer a gluten free menu, but they are well aware of what it means to be alergic to gluten and they take all of the proper precautions.

This was the pizza I came to try at Promise Pizza. A coworker had mentioned that he tried their vegan pizza and it was both tasty and interesting. Vegan pizza huh? I had to give it a shot. If you look closely at the picture you can see cheese shreds in various states of meltiness. The crust was thinner, not as thin as the gluten free, but noticeably thinner. The cheese is the big difference, I don't know much about vegan cheese, but my understanding is that it's hard to find vegan cheese that melts like real cheese and that's really one of the core things that makes a pizza. Apparently after a great deal of research the owners of Promise settled on Daiya cheese, it's a heady mix of ingredients that I couldn't possibly remember. Although, it didn't act exactly like cheese, I have to give it marks for effort. The result was more creamier than melted cheese, kinda like a cheese sauce, I liked it just fine some of the others, not so much.

They were really generous at Promise, we had a ton of pizza still on the table when they started in on dessert, I was only able to remain for the first one, the Cinnamon knots. Pretty self explanatory and they went pretty fast so they were probably every bit as good as they smelled. The other was a brownie that I missed.


I had a great time at Promise Pizza, a big thanks to the owners for inviting us, and the kitchen staff that churned out all those pizzas. If you happen to be up in the Round Rock stadium area drop by and give them a try.
bloggers event gluten free pizza vegan yammering

Unknown said…
We order this quite frequently as it's less than a mile from our house (probably about half mile as the crow flies). The Founders Choice, Lonestar and BBQ Chicken (add Jalapeno) are favorites of ours.
December 2, 2009 at 4:03 PM

Ironjack said…
All of the pizzas were very delicious, I personally liked the super meat-athon "The Range".

Jessica Meyer said…
Great post :) I am sad I missed the event at Promise Pizza. I tried their gluten-free pizza back when they opened and it was fantastic. They use Gluten-Free Kneads pizza crusts which is also used around town.
Love your blog!

Ironjack said…
Ah, well that's good that they have a commercial option to turn to for GF crust. I'm surprised no one has come up with their own to distinguish themselves.

Thanks for dropping by!