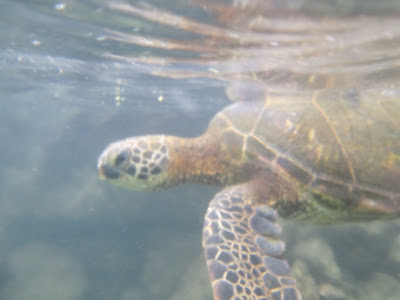 Merry Christmas everyone (ok the post hits on the 26th but the photos are from Christmas day)! Today was a pretty low key day everything was closed outside of the resort area. We went snorkeling in the lagoon at the resort. You can see in the picture above I was lucky enough to find a sea turtle. I actually found it twice and followed it around the lagoon. Were it legal I would have "pet him and squeeze him and hug him and love him and  and called him george" except I think his name was "Getha" as "getha hell out of here and leave me alone". I snapped some pictures with of various other fish I think we'll be looking for some more snorkeling spots. The resort lagoon had a lot of hot spots (causing foggy photos) and a lot of people kicking up sediment as well as the constant danger of being whacked on the head by the stand up paddle board people. 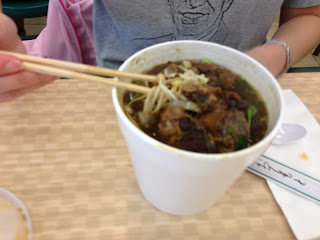 For lunch, since the Queens' Marketplace was open my wife wanted to go back to Lemongrass express and trying something else. She got the oxtail noodle soup. Her comment was it tasted like a cross between Chinese beef noodle soup and Vietnamese pho. The braised oxtail definitely tasted like a five spice braised beef and the soup had a pho undertone and the rice noodles. We both agree this was good but the Tom Yum Shrimp soup was better. 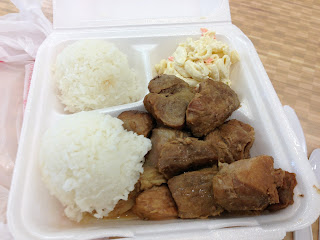 I went with an "adobo pork" from the Hawaiian menu of the "pizza, pasta, fish and chips, hawaiian and  mexican" food court shop (how could I go wrong?). It was actually quite good, the pork was more like a Chinese soy sauce braised pork very tender despite the appearance. It was served with white rice and the ubiquitous Hawaiian macaroni salad. I ordered a side of brown gravy since it seemed like the right "Hawaiian" thing to do. 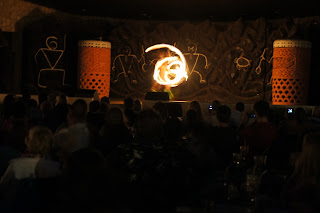 We went to the hotel Luau. I managed to take this low light picture of the fire dancer. The entertainment production was pretty good they had audience participation and it was an enjoyable Luau. It was a tad expensive, but we're on vacation. 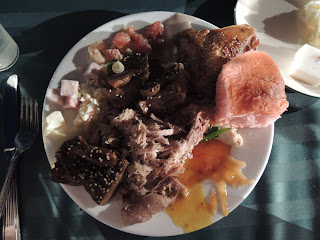 How was the food? It was good. The two stars were the Imi Pork (a shredded roasted pork) and the Shoyu beef short rib both were very tender and flavorful. The picture above is me cramming the following on to one single plate: Island Potato Macaroni Salad, Walpia Taro Salad with Mac nut and Coconut flake, Polynesian Shrimp Salad, Poi, Fresh Island Ahi Poke, Hawaiian Sweet Potato with Coconut Glaze, Huli Huli Chicken, Seared Island Catch of the day, Parker Ranch Shoyu Braised Ribs, Hawaiian Sweet Roll, and Ima Pig with Plum Sauce and Sweet Mustard Sauce. Pictured to the side was Dessert: Coconut Pudding Cake, Pineapple Upside Down cake. There were a few more I didn't get as well as fresh fruit.

I'll try to keep posting every day but no promises. Tomorrow we get some more water fun so my underwater camera gets some more usage hopefully I get some good pictures.
hawaii noodles pork yammering