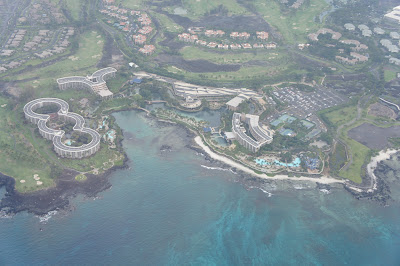 Not much in the food category this day. We had some leftovers for breakfast before going to the helicopter tour of the big island. I had the privilege of sitting copilot it was really cool to nearly pee my pants on every bank and turn as well as on the flyovers of valleys and mountains. Seriously, it's a great tour, probably the best way to see quite a few miracles by mother nature that you wouldn't have any other way of viewing. Above is an aerial view of the resort we're at. 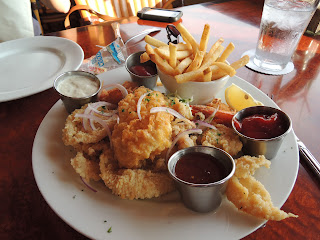 We were thwarted in our attempts to find something cool in Kailua-Kona after the chopper ride. All the local eats seemed to be closed for the holidays everything else was chain. So we went over to the coastal "touristy" area, we intended on going to an indonesian fusion place but it didn't open for a few hours so we ended up at the "fish hopper" and had a bowl of their award winning clam chowder (new england style) and Fish Hopper combo. I was ready to write this one off but the chowder (which I didn't get a picture of) was actually very good (and rich). The combo platter featured fried calamari, coconut shrimp, and fried fish of the day. The calamari was unique, it was cut into larger "steak" triangles quite tender. The featured fish of the day was the Opah (or Moon Fish) battered and fried. I've never had Opah, it's a little dryer than a cod definitely a more "meaty" chew. I prefer fried cod for fish and chips but it was interesting trying a regional fish. 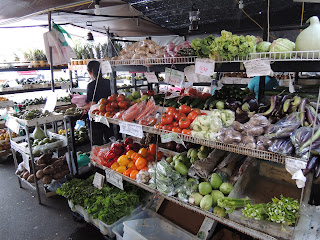 While in the area we did hit an open air market featuring fruits and vegetables grown on local farms. The market was wrapping up and closing for the day so there wasn't much shopping to be done, but I thought it worth a picture. 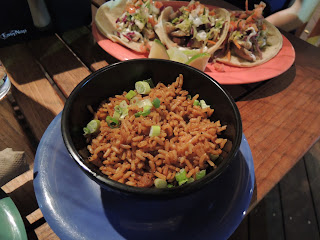 We're still on a very strange eating schedule because of excursions and what not we're eating at weird hours. We went back to the resort and hit the bar in our section and had some fish tacos (which was made with Opah as well) and some chorizo fried rice.
fish taco hawaii vacation yammering