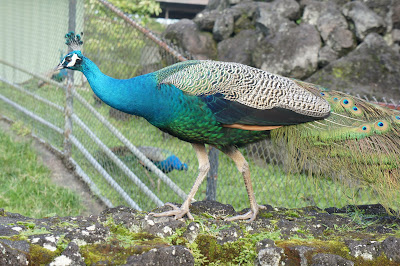 It was between a pic of Akana waterfall or a magnificent peacock that hopped on a wall in front of me. I went with the creature I would have reached out and touched except that it would probably peck my eyes out. This was taken at the zoo at Hilo. Not the biggest zoo I've been to but considering it was free it was neat that I got to see a white tiger, ant eater, goats, exotic birds and some neat monkeys I consider it a pretty good experience. The peacocks and the chickens were free ranged and ran through all the exhibits (yes chickens in the white tiger exhibit guess they're pretty fast.) 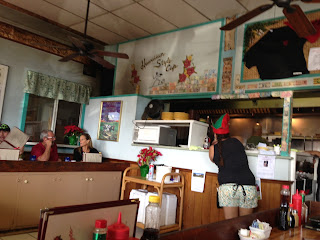 So we started the day looking breakfast. Jim gave us a great recommendation for the Hawaiian Style Cafe, as you can see we sat at a very plain "U" shaped counter with some really neat stuff on the menu. Wonton and ramen for breakfast? sure no problem. Pancakes with a 1 foot diameter for something like 1.5 dollars, yup got it! 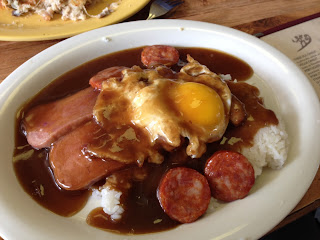 We went with "the Big Mok Loco Moco" which was a white rice topped with (get this) Portuguese sausage, breakfast sausage, spam and an egg over easy (now hold your hats) covered in brown gravy. I tweeted the after math of mixing up the concoction and called it the "hawaiian breakfast of champions" and yes we shared the dish. Both my wife and I were full all day and amazed that even towards dinner we weren't sure we wanted any food. 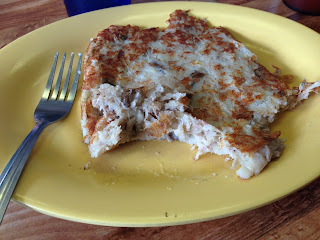 Even though the "Big Mok" was an overwhelming just from reading it, I did order the kailua pork hash just because I had never heard of it. Interestingly the texture was similar to a "turnip cake" from a Dim Sum menu. It looks like they smashed together new potatoes and kailua roasted-shredded pork and then skillet fried the resulting "paste" until crispy on both sides. It was a very tasty item but like everything in the restaurant over the top in portions. 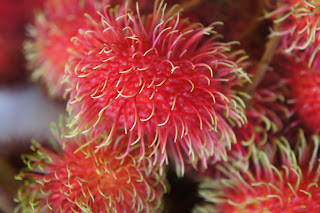 Skipped lunch still stuffed from the artery clogging carbo-holic breakfast but we did stop by the side of the road and picked up some passion fruit tea and some "rambutan". 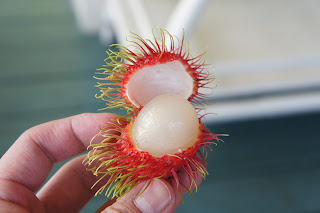 We weren't sure what rambutan was, but as it turns out it's a cousin of the Lychee fruit. My wife commented that it was not as juice as lycée and the seed was thinner and smaller.

We stopped by the big island candies factory. I got this nice panoramic picture of their facilities. We picked up some gifts and their shortbread cookies were very tasty. 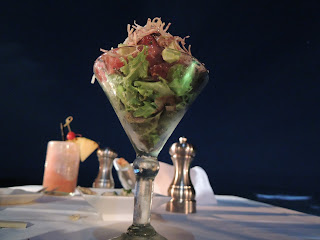 We decided to hit dinner at the KPC (Kamuela Provision Company) restaurant at the resort we were at.  First off we were in the dark sitting by a very tranquilizing beachfront. But photos were nearly impossible since it was impossible to see the food. Fortunately I acquired a very compact tripod, before you is a Limu Poke that neither of us could see in front of us except by this photo. I wish the dressing was a little more pronounced but the fried shredded taro was a nice addition. 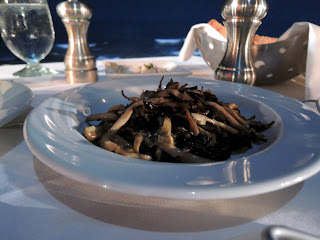 Another instance of the Hamakua Mushroom, this time as a side dish featured with wood ear mushroom. The wood ear came off a little slimy however the mushroom side dish was very tasty. 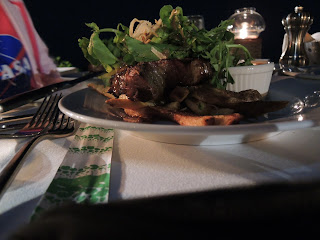 USDA prime NY strip with Trufffled fries. I'm still very happy my newest point and shoot acquisition manages to take pictures in the darkest of situation. I wish the cooks had gotten my steak at the right temp but then I'm a Texan that has several sous vide contraptions and blow torches you can't send a steak past me that's not perfection without my whining.