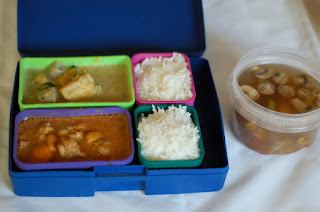 This week's bento is courtesy of my enthusiasm after taking a cooking class over at Thai Fresh with chef and fellow foodblogger Jam from Thai Cooking with Jam. It was an incredibly fun time and full over great information about Thai food and ingredients. The class was a hands on so that meant plenty of time in the kitchen helping with the meal we all shared in at the end. If you've ever considered going, get off that duff and go, if you've never even knew it existed then you're just plain missing out.

Ok just a bit of stuff on curry making, above you will see two of the three curry pastes (Green curry on the left, Sour curry on the right) used in the box. This is where most of the magic happens. Homemade curry paste compared to can has a fresher/cleaner taste, I'm not sure if it's because some of the ingredients aren't perfectly ground as you would find in the commercial version so you can get some of the components or duh you're using fresh ingredients. (I think both) Either way to produce these wonderful magical pastes requires some dedication which equates to a minimum of 40 minutes pounding away on a mortar and pestle. I suggest a strong arm and glasses, paste in the eye once was enough for me to grab some goggles. The green curry pictured on the left was nearing it's finish. The sour curry on the right actually took a little less time, all of it's components were easily mushed unlike the galanga and lemongrass in the green. I got a lot of questions mostly regarding the use of a blender or food processor. I've tried my hand at this in the past and I specifically went to the curry class because neither machine produced the fine paste that I found in a can. Mortar and Pestle is the only home cook solution that can produce the texture and ability to break down fibrous ingredients. I've not tried it against my Blendtec, but I'm not sure I want everything I make afterwards to taste hot and spicy. (think smoothie, hmm.. wait..) If someone has a less intensive solution, I'd sure like to hear about it because being able to have fresh curry paste on hand would be extremely +1 yummy.

So in class our first curry was the Sour curry, you could either use the paste as a normal curry cooking down some watermelon rinds and tossing in some fish, or make a soup out of it. We opted for a simple soup. My version I omitted the shrimp stock and seafood and treated it more like a normal vegetable soup. Literally it's a rendition of Hot and Sour soup Thai style. This is easily a new favorite, it had a heck of a nice kick and it's easy to make. The soup itself is pretty good for you, there's nothing I can think of that I would consider bad simply, low cal, and veggies what's not to like.

Our first curry, the Massaman Curry like the green curry below is of southern Thailand origin. Most of the southern curries contain more fiberous and dry ingredients making for long pounding time on the mortar and pestle. Many of the incorporated spices are influenced by Indian cuisine. This tends to be a milder and somewhat sweet curry, since I had promised a bit of kick this bento and got an overwhelming response I felt I couldn't disappoint. I snuck in a few dashes of Naga pepper sauce. I know that doesn't mean much to most of you so I'll give you some perspective, a habanero rates somewhere around 100,000 to 300,000 scoville units of heat, the Naga pepper sauce rates at 1 Million scoville units of heat (hence a few dashes in a giant pot). I didn't notice the difference but apparently quite a few did go figure. To finish off the dish I added some some sweet potatoes, onions, and chicken.

I really love Thai curry it's very versatile you can pretty much stew anything together in curry. And if you're in a hurry you need only have a few items on hand. Canned curry is great, it's easy and convinent, just stock some coconut milk to go with it and you've got the basis for a great lunch/dinner. Fresh on the other hand you have to try at least once, I can understand if you're looking at the cost/benefit on spending lots of time on a mortar pestle versus opening a can in a restaurant in that case fresh might not be the way to go, but nothing beats the feeling of making something wonderful from scratch. This fresh green curry was no exception very delightful, I popped in some fried tofu, butternut squash, and Chinese eggplant. My only criticism is that I didn't grind the curry down enough there was still a bit of fibrous texture especially down at the bottom of the pot. And I think I went a bit overboard on the curry, I didn't detect enough heat (again) so I dumped in the whole batch. Apparently my taste buds are broken as my eaters had plenty of comments appreciating the kick. I suppose there were about 40 Thai bird chili peppers in the paste it was probably hot enough.

Really enjoyed making curry paste lots of fun and a pretty good workout. I'm pretty happy with how it all turned out and I've gotten some pretty positive feedback so I must have done something right. Anyhow, onto next week!

Yabbajonk said…
Most impressive curry from scratch! The sour soup experiment also a great success.
March 30, 2010 at 11:42 AM

cliffster said…
40 minutes of grinding! On the other hand, you can probably skip the gym after that. Get a TV in the kitchen, and have something to do while watching SportsCenter. Or, Bravo network.. whatever you like.
March 30, 2010 at 1:52 PM

Ironjack said…
@yabbajonk Why thank you very much! I do like the soup.

@cliffster Yeah, there's actually a cable outlet in there, I should get a small TV or something. And actually the Naga pepper sauce is exactly the pepper they're talking about in the article. I should carry that stuff in a holster.

Jam said…
ah, it was such a fun class to teach too. I forgot how good fresh paste taste. It's been too long since I made mine. We made some more later and just loved it too. Thanks for the post.
March 31, 2010 at 3:05 PM