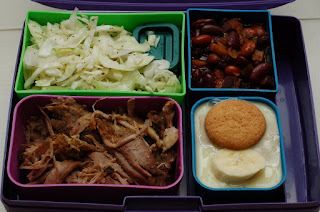 If there's one thing that people are passionate about it's bbq, everyone's got their opinions on the best, sauce, beans, coleslaw, what counts, what doesn't and then there's the basic arguement of beef versus pork. If I've done my reading and research correctly, most of the rest of the United States think pork when talking BBQ. Being a Texan, all I've really known is beef bbq. In fact, most places around the world call any method of slow cooking beef, Texas style bbq. A little history: the first BBQs in America during colonial times were pork bbqs, this was because pigs tend to be easy low maintenance animals that can be left out semi wild and caught and eaten when especially when times were tough. Althought there are many stories on the background at least one account tells us that American Indians understood the concept of cooking meat long over low heat. It is also told that the Spanish were the first to bring the noble pig to America. Between the two we have bbq.

Being that this blog is all about new culinary horizons, I decided it was high time I investigated barbecue outside of my great state of Texas. I targeted my search on North Carolina, it seems to be a state of high contention over the subject of bbq even having four major differences in sauces based on region. It seems the melting pot for all of these disagreements can be found in Lexington, NC where the various different styles can be found and just happens to be near the center of the state. Onto the food!

We'll start with the star of the show, Lexington style pulled pork. Granted, I cheated a bit here, I don't have a smoker anymore (gasp, I know right?) so I had to make due with an oven. Thanks to the fine folks at Cooks Illustrated (one of my favorite publications), I was able to lean on all their research and experimentation to get the perfect pulled pork from an oven. How is that possible you ask? Here's the short answer on the process: Start with brining the pork (cut in two large pieces of course) with some liquid smoke. Then apply a wet and dry rub, and bake fully sealed on low heat over a few hours. Next, to develop the bark you uncover and go back into the oven. You have maximum bark, apparently a premium for pulled pork, by having cut the pork butt into two pieces exposing a lot of surface to the rub and heat. As you can see in picture, it came out really amazing. As I took the pork off the trays was they literally fell apart in the move to the cutting board. Today's bento concept is like my DIY falafel bento, it's an assemble your own sandwich kinda thing the pork is component one.

Coleslaw, you love it or hate it, and most people I know hate it. Down south typical coleslaw is mayonnaise based, creamy and generally not well thought of. This particular coleslaw is purely vinegar based, it's very similar to one of my favorite coleslaws from the Salt Lick here in town. (if anyone can figure out or has a draft of their recipe, I would be eternally grateful). Here the dressing is more of a vinaigrette with celery seeds and you pick up some spice from the white onion that is well camouflaged in with the cabbage. It's got more similarities with Sauerkraut than it does with it's mayo based slaw cousins. Other versions of this vinegar based coleslaw include some with the vinegar based bbq sauce, or straight up ketchup. I left a tub of bbq sauce so that my eaters could optionally add it to the slaw or the pork when assembling their sandwich.

These bbq beans actually come from a fairly famous restaurant in Lexington that was featured on Food Network. It's curious in that instead of the normal ranch style pinto beans it's a blend of three different beans. I cooked it with some of my maple cured bacon and added some of the mustard based bbq sauce from last week as well as the vinegar NC style sauce. Very tasty and I'm very glad to have some leftover.

Finally I made some homemade banana pudding. After about 30 mins on the stove I was quite convinced that the pudding was never going to thicken and setup. Sure enough a bit of time in the fridge and it thickened beautifully. I've never made pudding from scratch it was an interesting experience. Kinda like making a custard. I'll admit, I was ready to dash off to the grocery store and pickup a box of instant if necessary. This was probably the most labor intensive item on my lunch today. Sorry about the picture, I didn't have a good way to take a picture of the pudding and it's layers without just showing you the in-progress assembly of the pudding.

Very enjoyable lunch to produce this week, I'm glad for the leftovers as the pork was delicious! As I said the pudding was the most labor intensive item on the list, but the whole box was quite time consuming. Early polling from my eaters indicates good results.