Tools of the Trade: Blendertec blender 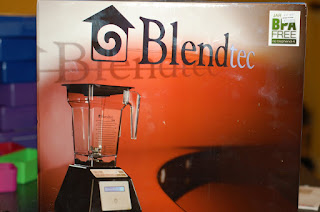 Another gadget post this week, it's been a good two week recharge, full of catching up with stuff and gathering new ideas for the coming year. I only have a few more bentos for the year with the holidays and all but I promise to bring you a food post next week.

This week's gadget is the Blendtec blender that's right, from the folks that bring you "Will It Blend" (I can practically hear a studio audience chant the phrase as I type it). I decided on this purchase based off of my inability to blend my broccoli soup to the consistency I needed it to be, unacceptable. I spend so much time in the kitchen that I've made it a point to try to always buy commercial grade equipment, ultimately only two made the final list. I was trying to decide between a Vitamix or this Blendtec blender, it turns out what was available at my "local shop that allows me to use my handy-dandy coupons" only had the Blendtec so there we have it. I understand the Vitamix is also a great blender, but I've only got the hand I was dealt. Although I'm not doing a proper review and compare, it would have been nice to see how the Vitamix performs side by side with the Blendtec.

Enough yammering down to the features. What came in the box: blender base, blender jar, dvd, instructions and recipe book. Pretty basic stuff here. The thing to note is that the blender jar is actually a one piece, there's no unscrewing, or opportunities for leaking (yet). Cleanup consists of sponge cleaning and a thorough rinse, I've not yet had any issues with "gunk" in the jar from not being able to clean it. Another nice feature, instead of rubber teeth that lock into the base it's a solid metal peg with teeth. In practice this should lead to better long term performance, since rubber will tend to degrade, my recent trip to the local restaurant supply store, shows they stock bins of replacement "blade units" telling me that it's one of the first things to wear out.

I haven't really looked at the recipe book, but apparently this is a new item added into the package previous reviews that I read online had a lot of negatives on how Blendtec doesn't provide a recipe book. I'm not certain why this would be a problem, it's a blender, it does what blenders do. Anyhow, anyone that was on the fence can rest assured that now it has both DVD and recipe book.

The Blendtec has a fairly straightforward button menu each button denotes a special program for creating soups, smoothies, batters, milk shakes. You can control the speed via the up down buttons, although I think I'd rather a dial here. I'm intrigued by the Ice cream/Frozen Yogurt setting, not quite sure what that's about I'm sure it's on their dvd/recipe book. I've only managed to use the pulse button which is pretty much all I need. Note the nice LCD panel, when you hit the programs it tells you what it's doing, it also counts your usage and for note, it did keep the usage count despite being unplugged.

Well? How well does it work? Can it pulverize? Will it leave you with weird chunks? How about dead space? The actual performance of the blender is really an explaination of what "power" means in a blender. Your regular run of the mill blender will run at 500 Watts, you're nicer ones tend to get you about 700 watts. This thing runs at a blazing two horsepower (roughly 1490 Watts). Zounds! Pictured above is a before and after shot of a bunch of ice cubes before they met their demise at the hands of this Tasmanian devil. The resulting fine snow powder took about four seconds. Right, four, no jiggling, no shaking, no tamping down, I simply held down the pulse button, and something akin to a jet engine went off.

Ok, ice is fine and good, let's make soup with something chunky. As before in my quickfire post, I made some broccoli soup, very simple whole broccoli florets and a bit of water. This took a little longer, something like ten seconds, but as you can see there is no trace other than the bright vibrant green that would hint at broccoli. In fact, once again, if held longer it actually whips the soup with air and brings about a fluffy texture.

So what do I think? I'm pretty happy with my purchase, it's the same blender the local coffee shops use to make their iced coffee drinks and smoothies. Good enough for the daily use of a coffee shop, then plenty good enough for me. On the off chance I need to blend some golf balls or rubber mallets, I have the option to do so. No real seems or buttons to get messy or stick over time, so cleanup is really simple on the base unit. The only real complaint I have about this blender is that it's louder that a regular blender but I expect loud noises out of blenders, especially ones that are as powerful as some lawn equipment.

I've got a few more pieces of equipment queued for review during the dead spots this holiday. I also have noticed quite a few travelers coming in looking for my orion cooker post, I'm going to chronicle smoking a thanksgiving turkey being that I didn't get any left overs from home this year, so look for the details and recipes on making that turkey I did last year.
blender chilled soup gadget review tools yammering

Ironjack said…
excellent bring stuff to blend when we make some chinese steamed buns, when are we gonna do that by the way :)
November 30, 2009 at 7:17 PM