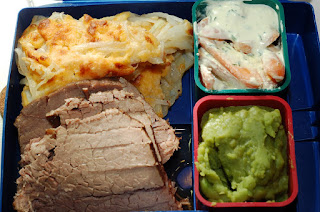 To celebrate St. Patrick's day I decided on another Irish Bento, I figured this time around I wasn't going to do the traditional Corned beef with cabbage, been there done that. I figure, how hard is it to find some good traditional Irish recipes that were preferably healthy? Apparently this proved to be a pretty tough task. I started digging and found loads of cool ideas, when I started researching it turns out they were actually Scottish, or British. Worse yet the things I did find were all cabbage, stews or corned beef and always the potato. I was at a loss, until I remembered that I work for a global company. I pinged one of my coworkers in the UK office who happens to be Irish perfect! (I thought) The conversation went something like this (minor paraphrasing but the just think Irish accidents on his parts):

Me: "Hey, what do you guys eat in Ireland? What kind of traditional foods do you have? I'm trying to find something you don't usually get. I'm trying to do an Irish bento. All I'm seeing is potato stuff."
Him: "We don't lay claim to any cuisine! There's eating and drinking in the black gold! (Guinness beer). Hm well we eat loads of Potatoes, cabbage and bacon. You could do a corned beef with cabbage!"
Me: "You're not helping"
Him: "oh you can do a stew and you can lash some guinness in it. Roasts and Stews are a staple. Maybe you can make them some potato bread. I'm tellin' ya people would love the potato bread."
Me: "..."

Fortunately, perserverance does pay off. I eventually found cultural sights that gave me names of dishes and some recipes to work from. After a bit of work I think I came up with a reasonable menu. Being such a strong part of the culture, I could leave out the humble potato, so I went ahead and made something with it that involved other methods than mashing.

You'll have to live with the photo of the Spiced Beef above in the box. This dish is traditionally served cold on the buffet line during the holidays. I somehow missed taking a picture of it. I took an eye of round and rubbed it down with spices and quick cured it for three days (suppose to be seven, with some pink salt added much like curing bacon). It was then slow cooked for seven hours in none other than my friend's favorite: Guinness. I was quite curious about the results because eye of round does not have a lot of fat or connective tissue to break down. Seemed like everyone very much enjoyed it. The spices and Guinness did a good job of evenly seasoning the meat there was a lot of flavor in every bite.

The origin's of this dish are a but dubious, some claim Scottish, but I found some references that were backing Irish origins so I went with it. Pan Haggerty as you see on the right is a thinly sliced potatoes, topped with sweet onion and cheddar cheese, pan fried and finished in the oven. I underestimated how much two pounds of potatoes could produce (it was a tiny bag of potatoes) but when sliced thin two pounds made about two and a half of what you see in the picture (and the first two were double layer). Surprisingly the only really bad thing here is the cheese, and even then on a per serving basis there wasn't really all that much. Yes granted the starch/carbs from the potatoes aren't helping the bottom line.

This dish was named after a mountain Translated as: "The Mountain of Women" it's given name is Slieve Na Mbam. Apparently the reddish mountain top pokes out of the milky morning mist. I'm not quite sure why the mountain is of women, nor am I sure how carrots play into the whole thing, but like I said before, I was really searching for dishes and this one blipped my radar as unusual. I took some carrots and poached them in milk and finished it with a bit of cream and butter to thicken the sauce. Parsley usually goes as garnish for this, but the italian parsley's flavor was a nice complement to the dish. The normally somewhat sweet carrots are mellowed out nicely in the milk. I'm very pleased with this dish and will happily take it to my next potluck. Carrots are not normally on my seek out and eat list, but this dish definitely changes my perspective on them.

No dessert today, the sweets I found were just too overwhelming and I couldn't bring myself to put in the box as it was on the heavy side. Instead I opted for these Matter of Fact Peas. I believe the dish gets its name from the use of Marrowfat peas (I couldn't find any so I went with split peas). What are Marrowfat peas? Well they are mature peas that instead of harvesting at prime, are left to dry out in the fields. I'm guessing this was a natural way for them to preserve peas for the winter as this strikes me as a winter dish where you're re hydrating some peas and mashing them up. I figure this is the type of stuff little kids were made to eat (and hated), I personally really enjoyed them.

Another fun bento for me. I love to do my research and get a chance to take a closer look at a cuisine.

Ironjack said…
nice play on words :) I was wondering how they decided to call fallowed peas marrowfat.