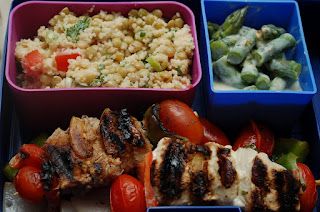 So last week's dessert was an assortment of fruits which was originally to be served over yogurt. It turned out I had so much extra fruit that I just went with serving the fruit and left the yogurt unopened. What to do with a giant tub of plain yogurt? Well, why not get more yogurt and do some investigation on cooking with yogurt. There's a whole lot of applications for yogurt, a lot of them center around middle-eastern and Indian cuisine, but as an ingredient I was shooting for using yogurt in every dish for the bento and trying not make it an "obvious" use of yogurt, like a parfait or something.

Except for dessert everything manages to be gluten free. Despite not following that lifestyle anymore, I still like to look in to see how gluten-free-friendly my boxes/recipes are just incase.

First up, the entree: grilled mint beef kabobs and grilled cumin chicken kabobs. The acidic nature of yogurt does a great job of breaking down tough cuts of meat. I find that the marinade has to have some strong flavors to get past the yogurt flavor itself. Of course traditional Indian cuisine does this all the time with the Tandoori cooking. I actually produced a lot of kabobs and didn't anticipate the amount of food I had for myself (happy accident). A very simple dish and definitely tasty, I'll have to consider yogurt for other larger applications when it comes to marinades and grilling.

Here we have lentils and couscous with yogurt vinaigrette, show casing the use of yogurt in a salad dressing. Naturally the tartness of the yogurt fits well into a vinaigrette, in this case it's the ability of the vinaigrette to coat the lentils and couscous that was really yogurt's job. I love the textures in this dish, the lentils added a nice bite to the salad. I originally feared that the dish would be too bland, but after mixing in the dressing it came out perfect, no salt added or needed the yogurt really mellowed out vinegars so that the vinaigrette itself didn't over power the dish.

Much like the dressing we use yogurt as a sauce in this Asparagus with Orange Saffron Sauce. The yogurt was cooked in with the saffron and chicken broth base. I think next time I would use less broth as the resulting sauce was a bit too runny for my tastes. The use of orange zest and juice and finally the saffron really put some neat flavors together. I was a bit dismayed that all they had were the giant asparagus at the store as I prefer the thinner stalks, but I'll take what I can get considering it's not in season.

Finally we showcase yogurt's abilities in baking: Blueberry bread. I decided to cut the lemon glaze because it was an empty waste of calories. It's interesting in that I used low fat yogurt, a similar bread recipe required a whole lot of butter and vegetable oil. This version substituted a majority of that fat with yogurt. I didn't really lose anything except got a bit more of a chewy texture which was just fine by me. From my research it seems that the use of yogurt is commonly in place of oil or buttermilk. I like it, is a great way to lighten up a recipe.

I'm very happy with my dip into yogurt land. I learned a lot about the health benefits and various uses of yogurt. That's all for now, see you guys next week!
beef chicken grill yogurt