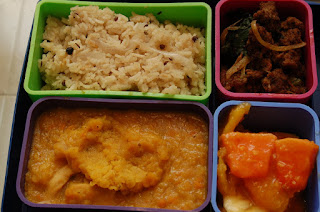 I have to say, I'm really enjoying my new camera lens and the more natural light looking shots I'm able to take with it. Hopefully you guys out there noticed the difference. (Ok the title shot was a little dark)

So, I needed to reel back this week the bentos have been getting a little pricey on the ingredients and the dishes a tad labor heavy. I also had to buy six new boxes to accommodate my new bento-ees, so I'm trying to cut back a little at a time to re-coop some of those costs. I've been doing quite well, last week's was only a little bit over the budget. It's been a fun challenge over all this time to make changes and tweaks to take advantage of sales or simply making a recipe cheaper without losing any of the flavor.

This week I bring you my second Indian themed bento. With the new audience it was tempting to dig up the old recipes, but there were a few things I wanted to look into and my trusty "future bentos" tag on my journal held some nice notes and ideas.

First up we have a Dal Murg. I had some extra lentils in the pantry and this particular version looked really good. You actually cook the Dal separate from the chicken. The chicken is braised in a lemon juice sauce to keep it nice and tender and merged back in with the Dal at the last moment so as not to diffuse the acidity of the lemon while it does it's job on the chicken. I mixed the red lentils (by accident) having split red lentils and plain red lentils, it turned out to be a "you got your peanut butter in my chocolate" kind of mistake. I got a differing texture in the dish, on the one hand mushy on the other lentils with a still a little bit of firmness.

Can't have Dal with out rice, of course not just any rice would do I put together this fragrant fried basmati rice. We have a little coriander, clove, cinnamon, and cumin seed, very fragrant and delicious. I think next time, I'd stick with using my standard rice cooker and re-tossing and frying the rice afterwards. Stove top rice is finicky for me (at best) and using the rice cooker method would have given me the anticipated texture as well as my intended flavor.

All of the dishes really showcase the amount of spices and complex flavors that go into Indian cuisine however this Khema Palak takes the prize. I used ten different spices to put this one together. The dish is ground beef sauteed with tomatoes, onions and spinach. Very flavorful and I could swear that despite my best scrubbing, I still smell it on me. Very tasty and colorful. I made it a point to tell my readers to close their eyes and taste the components. It had a lot going on.

For dessert, Indian fruit salad cocktail. Nothing particularly Indian about it, just a bunch of fruits that would normally go into the cuisine, papaya, mango, oranges, bananas with a lime based dressing to give it a kick (and to keep it from turning brown). Originally this was intended to be served over yogurt, but I had so much fruit I decided to try to pack as much in and use the yogurt for later.


Fun lunch to put together, not as labor intensive as some of my more recent entries (very happy about that). It's getting easier to cook for twelve, I think careful planning is helping me out there. Fridge space is another issue I'm trying to tackle but it's all getting sorted out. I think the break during the holidays will be nice, I plan on using some of my queued up experiments and gadgets posts to fill in.