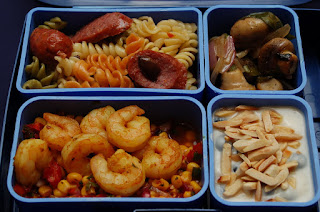 Super sweet, I had motorcycle class so I can get a license for my new scooter, the only downside is that it left me very little time to prepare a lunches. I really needed to find a set of dishes that would be either very easy to put together or extremely quick. Hence my quickfire bento, ok not quite the same quickfire as in the TV show, but I had to call it something and quickfire has a catchy ring to it.

Like him or hate him, Gordon Ramsay is an accomplished chef and researching his "fast" and "easy" books as well as watching a few youtube videos I was very inspired by his methods and philosophy of letting ingredients speak for themselves. I will say there will probably be some future inserts of his dishes because both books had some very tasty looking stuff, but for today we're sticking with the fast and easy.

We have two quasi mains today we start with Curry dusted shrimp with Corn Salsa. I made a slight modification in using shrimp instead of scallops to trim some costs, I think overall it didn't make a huge difference. The shimp was tossed in with some curry powder and quickly sauteed with some olive oil. The corn salsa was as quick as I could prep the vegetables and simple heat up on the stove. The salsa was quite delishious it had a good zip with the lime and a really nice aroma from the sesame oil. From the picture you can see just how colorful and eye catching everything was. I think this dish *might* have been the most time consuming, which is saying a lot because it really didn't take any time at all to put together. If I actually use my food processor for prep work (which I never do), i'm sure this would have take no time.

Main/major side number two: Fusilli pasta salad with sausage, olives and sundried tomatoes. I cut all the corners here, I bought julienne sundried tomatos, I found pre-chopped mixed olives in the olive bar, and used the oil that was packed with the sundried tomatos to cook the sausage and toss in with the pasta. I really think this took about eight mins to put together since I had to wait for the pasta to boil, everything else was easily sliced and cooked to be tossed together. I didn't really add any salt to the final salad both the olives and the sausage carried enough salt to help offset the blandness of the pasta. That said, you do need to take a bite of every component to get the full effect. I think the real beauty of this dish is that you could easily have all the components on hand (buy jarred olives) to make an impromptu meal for surprise guests and whip it out quick.

These next two come courtesy of youtube, first we have Marinated Button Mushrooms. I'm a little mixed on this one, but probably because by the time I was tasting this, it had just come off the stove and had no time to let the mushrooms marinate. I'm curious as to how it tastes today, I have no leftovers, so I'll have to rely on my eaters. I can say that it smelled wonderful! The mushrooms were first browned in olive oil, some shallots were tossed in, a healthy splash of vinegar, and finally added in some freshly torn tarragon. Again a very simple dish, the tarragon was wonderfully fragrant and definitely helps infuse the vinaigrette. I had to eyeball the ingredient measurements since I basically transcribed the directions from the video, I think I got it right.

Here it is, Gordon Ramsay's famous B

roccoli Soup. I first heard about this from one of my friends that had said it was his favorite soup. When he told me about the preparation I was a bit skeptical. I found the youtube video online showing Gordon Ramsay preparing this soup and had to try it myself. So, while I was making bentos last week I demoed this soup for myself. First off, I discovered that my blender sucks, I could not get it to the consistency that you see to the right. There were still bits of broccoli "leaves" (?), but it was still amazingly tasty. You want the run down? Basically, you get some boiling water, blanch the broccoli for a few mins, drop it in the blender add a bit of the water from the pot, salt, and pepper (I used white pepper I like the result better) boom you're done. Yes the video adds a couple more things, but the basic soup is awesome, best ever? Well maybe not but it's up there. Again, I eyeballed serving sizes and got it just on, which is unfortunate for me since I have no leftovers.

Now you're asking yourself, "but he just said he wasn't able to get it to the right consistency". Yes, after uncovering that I had inferior technology I decided I had to upgrade. The monster blender I ended up with will be a post in the next couple of weeks since I have some downtime due to Thanksgiving, so hang on I'll get to it. It is so powerful the resulting soup actually got some air whipped into it making for an interesting almost "creamy" texture to the soup.

Finally for dessert we have Blueberries with Honey Almond Yogurt. How do you make it? Honey + yogurt, add blueberries, toast some almonds and toss on. Yeah, it was that easy and yeah, it's some tasty stuff. The honey really lends a nice sweet but distinctly honey perfume to the yogurt and resulted in a nice creamy texture. This was a nice backdrop for the blueberries and we finish it all off with the aromatic crunch of toasted almonds. Even my normal dislike for dessert was moved by this little combo.


Amazing. That's really all I have to say to sum it all up. Normally preparation for making my bentos include a complete battle list made up of inter-twined steps from all of the final edits to my recipes. This week's list was non-existent since there were virtually no multiple steps for these recipes, once you started on the dish, you were finishing it at the same step. A usual lunch rollout for me is most of a Sunday, and that's with heavy thought and preparation to make it as easy and fast as possible. This week took four hours, from starting the clock to finishing (boxing) and the kitchen completely clean. That's twelve lunches that contained five items each, so that's 70 dishes. I don't think it could have been any faster. I'll admit when I was only cooking for six it was usually much faster but for twelve it's been a real time sink. I'm going to take a closer look at the dishes I produced to see if I can take something from this experience and modify future dishes/recipes for this kind of speed. Thank you Gordon Ramsay, I never followed you in the past, but you've made me a believer (don't worry Alton, you're still my hero).

A brief hiatus from cooking over the next two weekends due to Thanksgiving, I'll be filling in with gear other yammering posts in the mean time. Thanks for stopping by!

Ironjack said…
Hey, thanks for coming by! I'll say, two days later those mushrooms were awesome, if you make them give your self a few days ahead of time to let them reach their peak flava.
November 23, 2009 at 7:23 AM

KMTBERRY said…
Your blog is CONSISTENTLY one of the most interesting and BEST in town! THat broccoli soup sounds too easy to be true--I have to try it. I really like the way it doesn't have any dairy, yet looks so creamy. What did you get, a Vita-Mix?

Ironjack said…
Happy Thanksgiving to you both.

Kate thanks for the very kind words. You're making me blush. You'll have to try your hand on the soup it's now a staple in my fridge. I've tried asparagus but it's not quite as flavorful as the broccoli.

I ended up with the blendtec, I have a post queued up for it later today so watch for it!