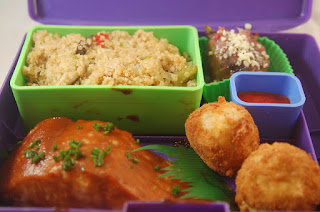 A trip down memory lane this week. I asked my eaters to give me their list of favorite dishes so that I can create a blast from the past lunch for them. Lots of suggestions, the tough part was picking something from everyone's list that still put a lunch with some balance of complimentary flavors. The lists were pretty big, I guess I'm doing something right. Let's explore what lunch brings us today.

We'll start off with our entree, miso glazed salmon from our Omega 3 goodness box. Topped this one off with some chives today. (not from my aerogarden) I've learned a lot from my experiments on this blog and the number one tip is to slightly undercook certain things to allow them to finish when a reheat occurs. That way the food is at perfection when the eaters actually eat lunch. Also I've learned salmon seems to be one of the rare exceptions of allowable fish to be packed in lunch. Usually, fish type lunches that are reheated get lots of complaints from co-workers on the stink factor. I'm not quite sure why Salmon is immune to the stinkage.

Primary side dish is the shitake quinoa pilaf from our Quinoa what? box. I'm so glad I rolled the dice on this grain. It's such a great and versatile ingredient, not to mention it freezes well, always a plus. Quinoa would be a natural in Asian cuisines had the grain been indigenous. It's a perfect blend of flavor and texture which is key to a lot of Asian cooking. It's so versatile and can really be used for anything even dessert (Note to self, look into quinoa dessert)

We'll shuffle along to our soup Dad's hot and sour soup. This one was featured in a few of the bentos but made it's debut on my very first bento. I think I've talked this particular soup to death so there's not much to add here. For those accustomed to the Hot and Sour soup from a typical Chinese buffet, this is the authentic real deal. No goopy cornstarch laden soup, clear broth from a braised chicken and a few simple ingredients. I actually forgot to put in the wood ear mushrooms, hopefully no one notices.

This was a surprise request from my audience, Green curry coconut Riceballs served with Srirachi sauce. This one was from Pantry Raid, I really enjoyed this creation but I figured it was too spicy for most of my eaters and didn't expect to see it in the cut. Apparently I underestimated how popular this dish was even one of the eaters that shy's away from spicy items had it on their list. I really don't know what to say, I love these little riceballs, they actually freeze quite well and perk up just fine under the microwave. It's a perfect side to nuke up and have on hand at any time. That reminds me I'll have to do another Pantry raid bento soon, I've been stocking up on all sorts of weird stuff.

Finally dessert, there really was no way to pass up the Figs in prosciutto, the figs are in season and it's a perfect time for this dessert. The honey is actually locally sourced from RoundRock Honey Co. (thank you farmers market) I actually finished this with a bit of gorgonzola crumbles that I had in the fridge. I had intended on giving two per box, but I had so much stuff crammed into lunch this week that I could only fit one in. Oh well more for sharing.

Once again surprisingly, I was pretty on budget with this bento. Most of the material I already had on hand, and the stuff I did have to buy were on sale. I compared food costs from when I first did a cost run down 2 years ago (yes I have a spreadsheet). Salmon is still selling for the same price! Anyhow. This was a great bento to do, lots of fond memories from bentos past. One of my eaters commented on the evolution of the posts and the photos, and now that I'm looking back on those links it's pretty big difference from before.

I've got some projects coming up that I'll be blogging, about thanks to TheHungryEngineer for the inspiration for both projects. Next week, I go to the farmers market to pickup my pork belly for project: cure my own bacon. And I took advantage of a sale at the local homebrewer supply store for project: Make cheese. I anticipate some good stuff on both. Anyhow, thanks for dropping by.

Kudos on the delicious Eaters Favorites bento. Given that I didn't get to enjoy until dinner I can also commend you on the longevity of the lunch.

Salmon - I make a mean miso-glazed black cod and I thought the flavors were perfectly balanced here.

Quinoa - Revelatory. I have a hard time getting any flavor in to quinoa but the shitakes came through beautifully in yours.

Hot and sour soup - my favorite, consistency sans cornstarch much appreciated - thanks dad.

Green curry coconut rice balls - nice but could have gone for more curry - lost it in the sriracha.

Fig - prosciutto only thing that didn't hold up til dinner - peeled and ate the fig - which still retained some of the other flavors. Lovely complement to cool the palate.

Ironjack said…
Thanks Justin for the blushworthy complements. It looks like your palate can stand up to the spicy zing, noted for future bento!

Thanks so much for the support and commentary, it's the only way I get to improve! I'm glad you enjoyed lunch I promise more to come.
September 1, 2009 at 9:58 PM