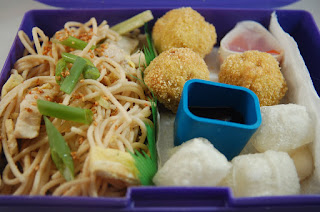 As I said last post this bento is all about economizing and making due with what I have on hand. Hopefully, you'll find my creations entertaining and fun. This certainly was a challenge for me to make some creations from a mish-mash of stuff in my pantry. As you can see my pantry is a mess, there's foodstuff from every cuisine I've ever dabbled in. The picture to the left is only the top 2 shelves, there's another two and a floor (and yes, they are packed to the brim, and yes, there's only two of us right now).

Minus the stuff I rummanged from the fridge and freezer this is what I ended up choosing for my challenge. Peanut butter, coconut milk, some rice, GF flour, some canned goods, and some obscure goodies I bought once upon a time in a japanese market. Yes there's more, but those are the highlights that got me some inspiration. My biggest problem was the lack of fresh ingrediants. All I had in the fridge was some green onion, egg and frozen chicken. Everything else seemed out of theme or save because I wish to eat it (beef ribs yum).

Our main course consists of Chicken Pasta in Asian Peanut sauce. What does that mean? Growing up, Dad would hatch up this cold noodle dish with whatever was on hand. My personal variant meant some chicken, eggs, celery, and some green onions for garnish. The heart of this cold dish was a peanut butter sauce. I happened to have all the ingrediants for the sauce and the rest was impromptu. Traditionally served cold, I advised my eaters do a reheat, the gluten free pastas need a zap in order to get back to being pliable.

Ok, I'm a bit proud of this recipe as it's not only an original (as far as I know) but it was SO YUMMY!. I saw the can of green curry and the coconut, and knew I had to do something with it. Taking some inspiration from the italian arancini, I ended up making a rice with the coconut and green curry and fried the whole thing. The coconut was really rich and subtly spicely, I packed in some Sriracha sauce to give it some "tangy" and extra kick. The whole package was beyond my expectations, the sour from the sauce kept the richness of the coconut milk from being boring! Good Stuff.

Note: Enough people have asked me for the recipe for my creation, I've put the full recipe under the comments

Kirimochi fried with Hoisin: I'll have you know I went thru two failures with the kirimochi before this fried incarnation. There's not much on the web on how to deal with this bazaar ingredient that I happened upon at the asian grocery. In fact, I had to go back and ask what to do with it. Here I chose the savory path and fried (rather than boil or broil, which I failed twice at) and coupled it with a nice hoisin sauce. I'm not sure how well this will re-heat in a microwave, but I will say at the time it was melt in your mouth. A sweet alternative will require a syrup or hefy amount of sugar to get past the blandness of mochi.

Finally, we have as my father's hot and soup with all the possible ingrediants found in the pantry. I didn't have any pork or tofu, but I think the end result here was pretty darn good. The key here is the cornstarch for thickening and the way you get the "egg flower" in the soup. (big hint, don't try to stir in egg while the soup is in full boil.)


This ended up being a fun (if not labor intensive) exercise. After digging around in the pantry, I certainly could have turned out even more stuff and I may have another theme's worth of stuff. I'll confess this probably wasn't the *most* healthy but it wasn't horrible. It was a lot of fried stuff which is kinda bad. There's only so much you can do cooking from your pantry with no trips to the grocery store as a rule.

As always thanks for tuning in. I didn't see any rabid requests that I make all recipes readily available so I'll just triage your requests as they come in as I have been. See you next time.

Julie said…
Even though your pantry is stuffed, I'm jealous.I'm most intrigued by the riceballs...they look great.
March 30, 2009 at 9:51 PM

coffee and queso said…
Yum. Wish I had this instead of my frozen veggie patty here at the office! I'd love your recipe/recommendations for the Hot and Sour Soup!
March 31, 2009 at 11:12 AM

Ironjack said…
@Julie The rice balls were fabulous. Very labor intensive and if you'd like the recipe I'm most happy to share.

@coffeeandqueso
Hot and sour Soup: this one is a dad's secret. There's no really good way to explain this recipe as he showed me by look and feel *and* each time I do a batch of chicken broth it varies by volume and thus causes you to "eyeball" ingredients and tastes so quantities differ each time I make it :) So either I give a live cooking demo or what I can do is give you some guide lines so you can make the best hot and sour soup for you!

Mistakes commonly made:
Using Soy as the salt component: soy is used for the color. Many a chinese buffet has a dark cesspool of a soup that is completely unappetizing. Salt should be used to make up the salt component.

Trying to put the egg in while boiling: This really screws up the presentation, back off the heat and wait for it to stop bubbling and patiently stir in your egg.

Where does the Hot in "hot and sour" soup come from: White Pepper! Very common component in Chinese cooking, it brings the heat without dirty-ing up your presentation with big pepper flakes.

Hopefully that helps. If not find me at the next blogger event and I can explain more.


Frying:
Gluten Free flour (about 1.5 cu) or (regular flour if not GF)
4 Large eggs
2 cu cornbread crumbs (or regular if not going GF)

Put everything into a pot and bring to boil. Stir frequently (as the rice will burn) as you bring to boil. Turn the stove down to medium low heat and cook half covered for about 20 mins. (or until the rice has fully absorbed the liquid.

Pour the rice into a shallow pan to let cool Salt the rice to your taste.

Roll the rice into ping pong ball sized balls. Try to make sure to pack it tight otherwise they will fall apart.

Dust each riceball with flour then immediately coat with egg and then breadcrumbs.

Fry the riceballs in batches for 3 mins each.


Frying:
Gluten Free flour (about 1.5 cu) or (regular flour if not GF)
4 Large eggs
2 cu cornbread crumbs (or regular if not going GF)

Put everything into a pot and bring to boil. Stir frequently (as the rice will burn) as you bring to boil. Turn the stove down to medium low heat and cook half covered for about 20 mins. (or until the rice has fully absorbed the liquid.

Pour the rice into a shallow pan to let cool Salt the rice to your taste.

Roll the rice into ping pong ball sized balls. Try to make sure to pack it tight otherwise they will fall apart.

Dust each riceball with flour then immediately coat with egg and then breadcrumbs.

Fry the riceballs in batches for 3 mins each.