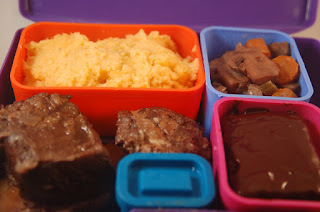 Yes, I'm posting a bento solely around the entree, I've been wanting to work with short ribs for some time and my recent purchase of a nice dutch oven pushed me into action. The rest of the items in the bento really were, "what can I put in with short ribs?" so there's no real point in trying to fabricate a theme.

This bento did include yet another coworker from my work, he's been standing in line asking when I'd bring the bento goodness to our work. I'll admit I was a little intimidated to cook for him, he's very well traveled, well knowledged about food, and has eaten at some of the best places, and has a brother that's a chef. I cringed as I put the bento in the fridge this morning. Hopefully it is to his liking.

Ok let's just lead off with the entree. Short ribs, it's one of those things that if I see it in a menu there's going to be about a 95% chance it'll be what I'm having for dinner/lunch/breakfast whatever. Why the obsession? If executed well, it's the most tender decadent yummy morsel, and because of the long braising time, the flavors all have plenty of time to develop in the meat, so everything in the pot contributes to the whole yummmery. So I present: Braised Beef Shortribs glazed with red wine reduction served with a horseradish cream sauce. My little Aerogarden (yes, I will one day post on this miraculous device) is now yielding enough for me to cook with. I took advantage of my fresh thyme in the bouque garni. For such a delicious dish, it's amazingly simple to put together. Bunch of vegetables, seasoning and two and a half hours done. (ok it's more complicated than that, but not by much) Needless to say, I'm very happy to have left overs on this one. I went ahead and saved the aromatics which held up just fine under the braising and served it on the side (waste not want not). At first I thought that reducing the rest of the sauce would have been a waste of time, however, as it turns out it added yet another layer of flavor when paired with the beef and the horseradish.

So my first instinct was to pair the ribs up with some mashed potatoes blah blah blah boring boring boring. Then I remembered my cooking experiment with nose2tailathome on haggis, we had some wonderful mashed rutabaga (my first encounter with the vegetable). I figured rutabaga is a good source of vitamin A&C, beta carotine, it would be the healthier alternative to mashed potatoes. Just as a note, rutabaga is in the same family as the turnip, in fact they look quite similar the only difference being that rutabaga have a yellow bottom rather than white, and even early in the season they are white. There is however a taste difference, the humble rutabaga is sweeter and less spicy than his biological sibling making and it is this difference that makes them a good candidate for mashing.

Lastly, I ripped off this recipe for Chocolate cake. It's actually intended as a healthy version of the full on super-sugary-bad-for-you version. To accomplish this some really smart substituations were made. First they use beets right, I thought the same thing, "beets? really?" I tell you it works. It gave the cake a nice moistness I never would have guessed. It also called for coffee to pair and add an extra set of flavors to the chocolate thus allowing for less sugar and fat. Finally it calls for dark chocolate, which I can only guess to give the excuse of antioxidants or something. Either way as desserts go, it's not as bad as it could be. Unfortuneatly, it was lost on me due to my inhuman super power to not like dessert or sweets. (Yes that wee sprig o mint is from the aerogarden too.)

Always a joy to produce these bentos. It's great escape for me to cook for folks and it's a super bonus that I get to post about them. Thanks for coming by and reading.

Unknown said…
What a lunch! Jack, that was one of the best meals I have had in a long time.

The braised short rib was perfectly tender and with a bite of mushroom and the horseradish… yum. The rutabaga potatoes were a perfectly-seasoned epiphany. And the chocolate cake was indeed deep, dark, and decadent. Finally, the description reminded me to contemplate what I was eating and smile about it.

Christine said…
my stomach just growled reading this (and i already had lunch!) again, nice photo of the final plated dish just like in your last post!
August 24, 2009 at 5:57 PM

Ironjack said…
@Justin I'm so glad you enjoyed lunch! Thank you for the high praise. And of course thanks for dropping by and giving a first hand account :)

The ribs were even better when I re-heated some last night for dinner. I might have to make another set just to freeze so I can always have some on hand.