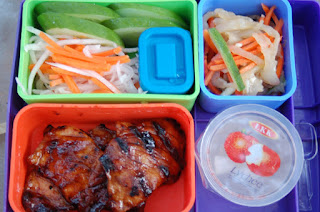 Very exciting week this week. I turned out we didn't have many folks at my wife's office so I offered a bento to someone at my workplace. A new eater! Always nice to cook for new people, but I go thru great pains to keep my worlds separated so it's hard to put my food (specifically the stuff I post about) on display for the people I work with. I'm not sure when I developed this weird phobia. At my last job I was all about bringing in food, heck I even setup an omelette station and cooked for everyone. Maybe it's because there are so many more people here that haven't been over and tried my food *and* are foodies. It's like going to the judges table. It's irrational, I'll get over it.

This box is actually a requested "hey can you go figure this thing out" bento. I was asked to re-create a Vietnamese bbq pork sandwich called a Banh Mi. Apparently it's a big favorite around here at my work and my wife loves them too. The trick I had to get right is the specific type of Banh Mi they were all looking for. You see there are a variety of Banh Mi, some with just pork (as I've done it) some with ground pork, some with pate, the sauces and marinades all differ, so I had to do some recon and taste what it is they were talking about. We went out for vietnamese and I was able to sample what they were looking for. I futzed with a few versions of the marinade until it tasted close to what I could remember and took a few lessons from my Korean Bento and broke out the indoor grill (gotta have that char). Also, to do this right I had to do a quick pickle with the carrots and daikon. The cucumbers come courtesy of my father's garden.

Now, I didn't get to go to the vietnamese food cart that they really wanted me to replicate. So I had to go out on a limb with my cilantro mayo to try and get this close enough for their satisfaction. I used a reduced fat olive oil mayo (surprisingly good at half the calories and fat) whizzed in a bit of lime fresh cilantro very tasty (credit for this one goes to south beach diet recipes) All in all I was told it was very good and "spot on" the only thing missing from my coworker's comment was fresh slices of jalepeno. So yay me I managed to get this one right.

While at the Vietnamese restaurant, I had my coworker try jellyfish, he was instantly hooked. It was a good dish, my problem was it was pretty different from the version my dad does, it lacked the proper crunch and hence it didn't taste right. Since I had been going on and on about the difference I figured I should also do a nice batch of jellyfish to show my coworker. I also owed a jellyfish salad debt to another coworker, and my wife really likes the stuff, so it was a hat trick. Same thing as last time, you'll definitely kill some vampires with all the garlic. But it is a tasty dish.

I cheaped out on dessert and included a lychee jelly dessert so nothing special there.

This was a fun bento to make, I like the challenge of trying to create a copycat recipe. It was also fun to show *my* coworkers exactly what it is my wife and her coworkers get every Monday. They didn't realize it came in a package with a note attached. (I suppose I should get more of them to visit this blog)

Anonymous said…
I am so jealous of your wife and these co-workers!!!! What I would give for my hubby to do this for me.

Ironjack said…
:) I suppose there are benefits towards being coworkers with my wife.

Ryan said…
Okay, I know I said over twitter that you've pushed me to try my first Bahn Mi, but I've gotta comment about how awesome this bento looks. I keep coming back to this page just to look at the pictures! Fantastic job Jack!
August 22, 2009 at 5:33 PM

Ironjack said…
:) Thanks Ryan! It was a tasty bento and very popular with my eaters.