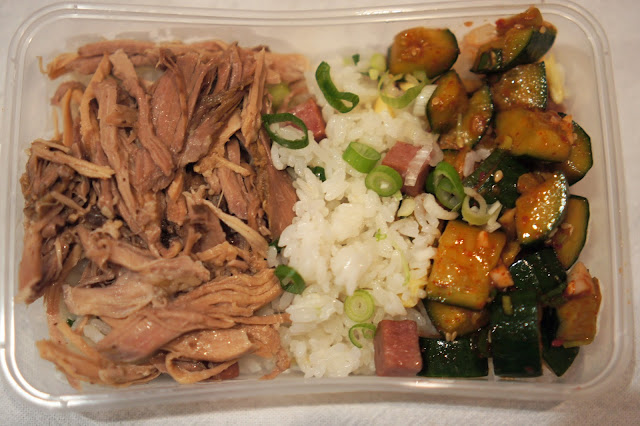 BBQ (more accurately grilling) culture is pretty big here in Sydney, I was talking with my coworkers about my friends back home and their awesome briskets and pulled pork in their big green eggs. Here they are more into grilling kabobs and steaks on the "barbie" it's a little more rare to hear about smoking and slow cooking. So folks seemed pretty excited when I told them I had previous made pulled pork in a slow cooker, I ended up promising to bring in a "Hawaiian" bento with my slow cooker Kalua pulled pork.

I suppose this one is not much different than my first Hawaiian bento. The box is smaller and no compartments so I've had to learn to deal with "sauceless" dish (rather my backpack learned the perils of sauces during my walk to work).  One of the "cool" things here is that most everyone has standardized on "takeaway" boxes (the clear container above). They're all microwave safe and dishwasher safe, every lid fits on every box and there are two sizes that are all uniformly the same (more or less).  I'm probably more excited about this than I should be but you have to take your small victories where you can. 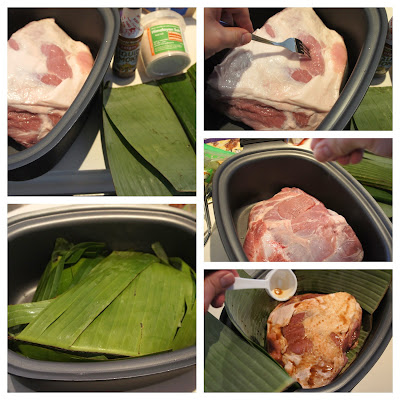 Anyway back to the box. First the Kalua pulled pork. I applied my learnings from last time, I had the butcher take the skin off. The rest was super simple, Pork shoulder, Himalayan pink sea salt, banana leaves, and 1 tbsp of liquid smoke (I used mesquite). I liberally seasoned the pork, "forked" the pork, added the liquid smoke and wrapped the whole thing in a couple of banana leaves. 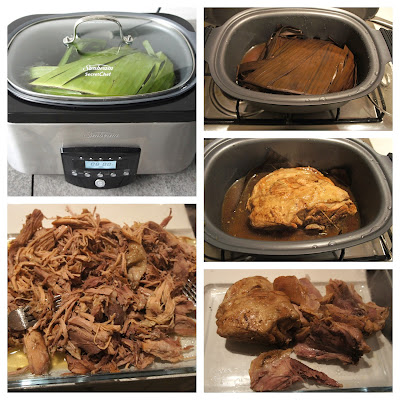 Into the slow cooker and you're done. (yes that's it.) The cook time depends on the size of your pork generally I go for about 1.5 hours per pound of pork so this one went for about five hours.The pork came apart into a few big pieces as I tried to take it out. It's such a simple to make dish but very flavorful the banana leaves make all the difference in the world. 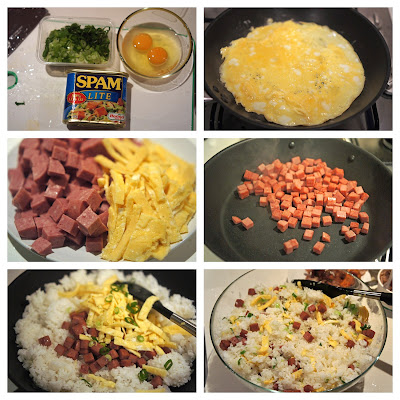 Spam Fried Rice, you can read about it in my previous post. Same as last time only this time with a few detailed pictures of making it. I opted for Spam "lite" which is still reasonably salty. The recipe is pretty simple. Beat the eggs with a touch of salt and make a omelette/egg pancake. Slice the egg into two inch by half inch strips and cube the spam. Pan fry your spam to give it a little bit of a crust, and remove it from the pan. Heat some oil and add five cups of cooked white rice (use short grain you need it to stick together a little) and toss it in the pan, once the rice loosens up with the oil, add in your spam and eggs and half of your scallions. You want to get some of the onion flavor going as well as get some of the rice a little toasty to give it nice aroma. Just as your about done toss in the rest of your scallions and take it off the heat and stir and incorporate the scallions (the residual heat will gently cook the newly added scallions). 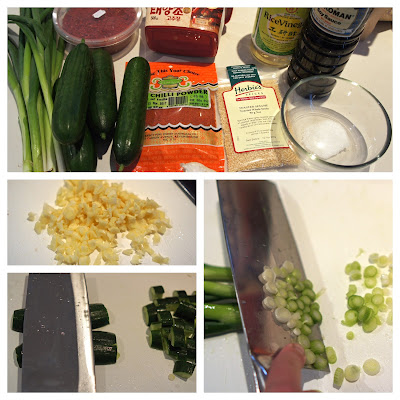 Finally the cucumber kimchi, Hawaiian food is heavily Asian influenced you can find kimchi just about everywhere. This dish is very similar to the Chinese pickle I've done before (actually I've done quite a few). This one is just a lot more spicy. Unlike regular cabbage kimchi I didn't let this one ferment over weeks. Kimichi sounds intimidating but it's really not that hard, there's just a bunch of prep work involved. Yes the ingredients are many (see recipe below) but most of the work is in chopping up front. So you mince a bit of garlic (ok that's more of a chop than a mince) and slice some scallions. For the cucumber I like to cut them in half lengthwise and them bash them with the flat of my knife. This opens up the surface area in the flesh of the cucumber to absorb the seasoning. 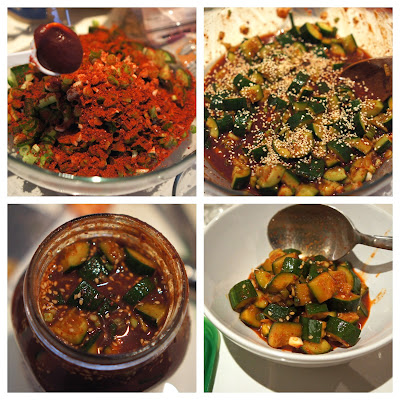 After you get all the prep done it's just a matter of mixing in chili flake, gojchujang, sugar, vinegar, soy sauce and sesame seed. Give it a good toss and I put it in a standard size Mason jar. It's relatively good to go after an hour but I held it in the jar for a week and it only got better. Be warned this stuff is pretty salty, so it goes really well with the fried rice and the pork, eating it together you don't really need to add any salt to anything.

Everyone was very pleased with the bento. The extras were gobbled up pretty quickly at home.

Cut cucumber lengthwise, using the side of your knife "smash" the cucumber halves until they split (so you end up with quartered lengthwise cucumber). Chop into 3/4" segments.

Kimchi can hold for a week (probably longer, I've never had it last that long)