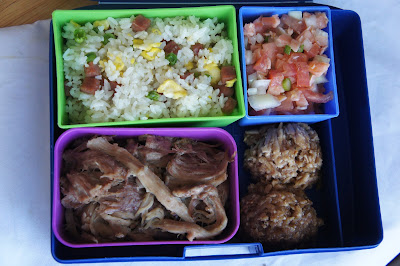 Happy New Year all! (a tad late I know) As always it's crazy busy. I did this bento two weeks ago and am only now getting to posting the pictures and writing something up.

Hot off the heels of my trip to Hawaii, I had to bring some of the great food back here to Austin and share with my bento eaters. The hard part was picking out what to make, it would be hard to cram all the great food I had into one small box. In the end after weeding out ingredients that would be hard to source and deciding what would taste good with what I give you: Hawaiian Bento. 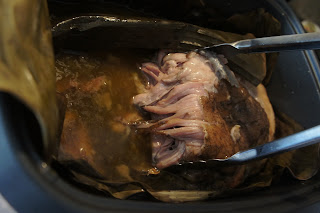 First there's just no avoiding some sort of pork. I didn't have the taro leaves for Super J's Lau Lau's so I had to settle with a Kahlua Pork. I cooked the pork shoulder wrapped in banana leaves for eight hours in the slow cooker and you can see the results above. Click in and see the full size, I realize the small picture is kinda funky looking (but I didn't want to show yet another plate of pulled pork). The pork just fell apart when I tried to take it out of the cooker. "Shredding" the pork consisted of trying to fish out the pork piece by piece out of the cooker.  I treated the pork with three different "Hawaiian" salts,  pink salt, red salt, and a volcanic black salt. The taste difference between the salts seemed very subtle to me and in the end I went a little too heavy handed. The pork was delicious the banana leaves imparted a unique flavor, but if you got any of the exterior "bark" it was a bit on the salty side. 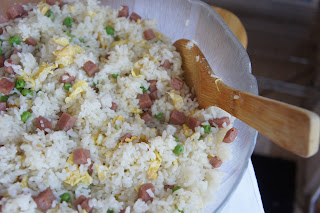 Next I turned up this Spam fried rice. Spam seemed to be everywhere in Hawaii. After doing a little digging apparently this started with World War II where it was supplied as rations to American soldiers.   It was a source of inexpensive "meat" that required no refrigeration and apparently lends itself well to asian style cooking. Since Hawaiian cuisine has heavy Japanese and Chinese influences it ends up in everything.  Most everyone's first impressions were the same "ugh, Spam? really?" and everyone ended up won over on the fried rice. I did purposely under seasoned the fried rice to compensate for the pulled pork and went with a "lite" spam. 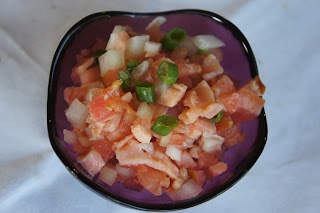 Since I did have the rice and remembering the instructions of Janis from Super J's I made some Salmon Lomi Lomi as it's the traditional thing to eat on rice. The recipe calls for salmon to be salted and cured over night. Since I didn't trust fresh salmon and didn't want to risk food illness, I went with a half and half substitution of cold smoked Nova Lox and hot smoked salmon. I never did get accustom to eating the Lomi Lomi but everyone really seemed to like it. 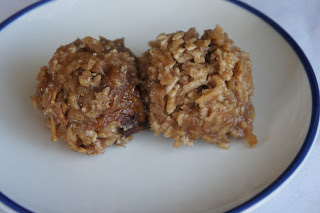 For dessert, I had to try my hand at making Kulolo. Instead of hand shredding I used the food processor  which made for a very different texture than the stuff Janis and Julie made. (more solid taro pieces) Also note to self: use the silpat like they did at Super J's, the baked on sugar on the loaf pan made me nearly abandon them and buy a new set. Anyhow the resulting Kulolo was pretty good, not nearly as sweet and definitely more "taro" flavor and more solid texture than gummy. Each version has it's place, I think some traditional Kulolo and a cup of hot Kona coffee is a perfect combo and my version certainly fit my bento theme of trying to be light and healthy.

It's been another dry spell of cooking, I might try to get out an email to do another bento this weekend, it'll be my last chance before a bit of work travel and Chinese New Year. Anyhow stay tuned!