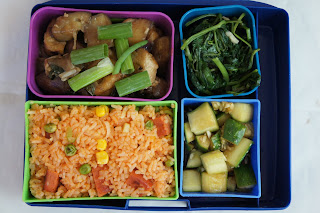 Today's bento is actually a bento for one. My girlfriend wanted to do a lunch exchange with a co-worker who's Indian. Great! A cultural exchange, and this sounded like a fairly straight forward box to plan out but as my girlfriend and I starting going thru dishes and ideas it started to get harder and harder. Apparently if you remove meat, seafood (some folks make that exemption), and eggs (same) it gets kinda hard.

Always the favorite is the ketchup fried rice. Problem is fried rice usually involves some sort of meat and egg. So I simply skipped the meaty items. On our trip to the Chinese grocery store we found some vegetarian "ham". The stuff stilled tasted like soy protein but at least it gave some additional texture for the dish so I went with it. I've had some vegetarian duck that was pretty darn close and was very very tasty. So, I'm gonna go on a tangent here. Given folks are vegetarian there seems to be a huge amount of products that mimic the look and attempt to mimic the "flavor" of meat. For the ones doing it for health reasons I can get this. But those that go vegetarian for religious or moral reasons what gives? I'm sure i'll draw all sorts of fire for that simple question. Anyhow back to topic

To go with the rice I made some Garlic Eggplant with Fried Tofu. This was a tweak from my previous post. One of the challenges of cooking vegetarian Asian dishes is that a lot of our sauces do in fact have "meat" in them. Fish sauce (fish of sauce not for fish), hoisin, oyster sauce (duh, slaps head) the list just keeps on rocking. Soups all have a chicken broth base, there is just meat everywhere! Anyhow for this one I didn't have any vegetarian fish sauce on hand and and I had to go with what I knew. Fish Sauce is used in Vietnamese cooking to add salt to a dish (as opposed to soy sauce) and it has a somewhat sour component so I went with some water (to loosen the sauce) and a bit of vinegar and salt. It's obviously a pretty far substitution but you gotta do what you gotta do. The dish came out great. I liked the addition of the fried tofu it gives a bit more substance to the dish.

Nothing new here garlic sauteed water spinach, hot wok/pan oil, garlic sauteed, then down with the spinach and salt. This is usually a very authentic "Asian" vegetable that turns out to be a huge sleeper hit with non-Asians. Unlike it's English name sake, when wilted the vegetable's stem still yields a reasonable crunch. I'm not sure about the nutritional benefits of water spinach are compared to regular spinach but I have to imagine it's got a healthy amount of iron like spinach. I'll post an edit when I finally figure that one out.


Edit: So yeah it's good for you too lots of iron vitamin A,C. Lots of different sources but this one pulls it all together best.

The name for this dish is Liang Ban which really is a whole class of quick pickle/salad type dishes. This particular version uses pickling cucumbers and is simply dressed with ton of garlic, soy sauce, sugar, vinegar and drizzled with a bit of sesame oil for some nice aroma. It only takes about 30 mins to setup but I really really love this dish the next day. Just be warned that you shouldn't count of meeting any one special at the bar or talking to anyone you know for that matter because the garlic is potent! I've taken a shower and thoroughly brushed my teeth and sometimes this stuff still gets you. I my final solution is to add mouthwash on top of all of that. Still it's a good yummy dish I can't seem to resist.

I've not yet heard back on how the exchange went. I will say it's been a neat challenge modifying and tinkering the sauces and dishes to meet the vegetarian requirement. I'm kinda bummed because this easily could have been a normal set of bentos, but since I was gearing up to go on vacation I decided to keep the scale to one lunch. I'll have to make it up to my bento-ers. Anyhow, as always thanks for dropping by!
chinese fried rice pickling vegetarian

Ella said…
I totally get what you mean about the vegetarian "meat". They serve that stuff at the Buddhist temples - what gives?