Beef Stroganoff over Zoodles in a box 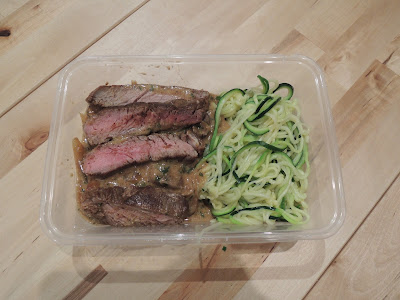 As a kid I loved those packages of instant stove top noodles. Not just ramen but the ones that were "broccoli cheese", "alfredo", where you just add milk and butter, maybe some ground beef or tuna if you were using a "helper" version and voila dinner at $1.50 an envelope. I particularly liked the beef stroganoff, something about that powdered sour cream I suppose.

Over the years, whenever I have a chance I order the dish and some variation has made it into this blog whether it's meatballs or eating on the cheap. This time I'm going to make it my main focus. 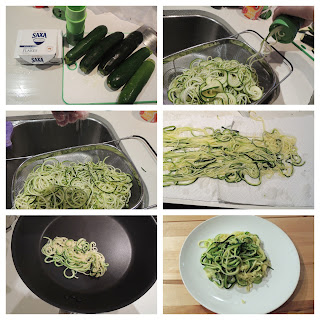 First the pasta. With my new Veggie Twister device I decided to go with a "zoodle" option. The pasta honestly is just a conveyance for the sauce and the beef. I figured using zoodles I could save a few hundred calories and guilt. Just using zoodles freshly cut there's just way too much moisture in the zucchini. I decided to salt the zoodles first and let them sit for 30 mins to draw out some excess moisture. As you can see I used about five zucchini that was intended for a double serving of the recipe, I think I actually needed ten.  After rinsing and squeezing out the extra moisture I blotted them dry and the quickly pan fried them to get them to soften. Some people stop after the salt step I believe that's the "raw" version of the noodles. As I said in my previous post, you're not going to fool anyone into thinking that this is some funky green colored pasta but this certainly did work well in this application. 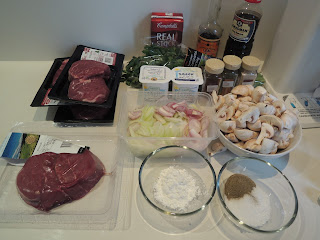 I took four different stroganoff recipes and fused them into my usual frankenstein monster. (yeah that's about $70 worth of beef this is kind of an expensive recipe, it's Australia I've come to expect nothing less) 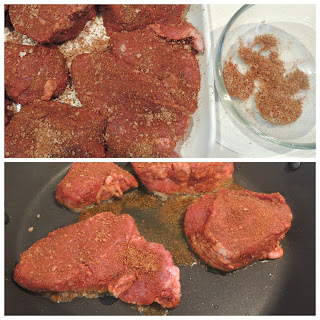 I really liked the idea of using beef steak cooked to desired doneness rather than cooking strips of steak in the sauce, it makes for more tender meat. The rub had a bit of paprika, garlic, salt and pepper. I seared it quickly to about medium rare, there was plenty of fond at the bottom of the pan to start the basis of the sauce. 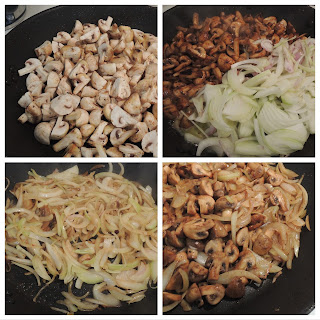 For the rest I modified the sauce base. I went with a combo of shallots as well as yellow onion. Pretty much all of the recipes had you cook the mushrooms and the onions together (mushrooms first and the onions to join later). I had to back out of that mid way since the mushrooms were going to overcook. (maybe I should have used lower heat). I ended up cooking the onions and shallots separately and then re-adding the cooked mushrooms. 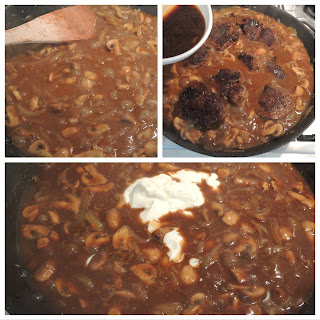 For the liquids: a nice beef broth, add in some Worcestershire and soy as well as some thyme and ground mustard. I dropped the steaks back in to warm up and get some of the beef juices back into the sauce. Once everything was happy and cooking I thickened with some cornstarch. To finish usually you go with a healthy dose of sour cream but one of the recipes opted for greek yogurt. I liked the idea of using greek yogurt instead of sour cream it saves 60% of the calories and fat from even low fat sour cream. 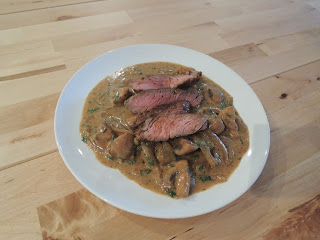 To serve I sliced the steak and served it atop the sauce with a bit of flat leaf parsley for color. The end result was a beautifully cooked steak over my favorite flavors of beef stroganoff.

I still need to compile the recipe from my notes and alterations. I'll post it up when I'm done.

Edit: (Sorry it took so long, I finally managed to compile my notes)