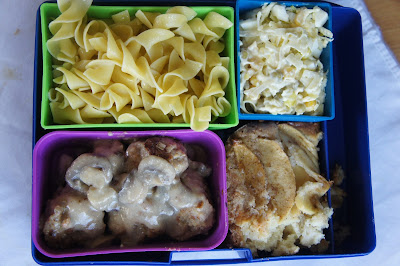 So for whatever reason my food blog news feeds have recently been posting more and more Polish food recipes. And when a meatball recipe came thru and I was pretty sure I had to do a Polish Bento. I'm going to keep this short and sweet. 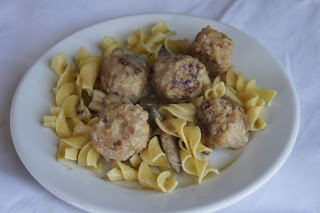 I LOVE meatballs and like I said it's what got me to make enough time to cook. Klopsiki Pulpeciki is a meatball (I went with pork only this time) in a mushroom sauce. But since I'm going off gluten for a little while, I made this a gluten free recipe. The binder was breadcrumbs and I used a cornflake gluten free substitute, for the sauce I used some of my all purpose gluten free "flour" blend and it thickened up like charm, and of course I served it over a brown rice flour pasta (regular egg noodle pasta pictured above). The interesting part of this dish is the use of sour cream as part of the binder for the meatballs and a lack of sour cream in what tasted like a "Stroganoff" type dish. I seared up the meatballs and finished them in the mushroom sauce. 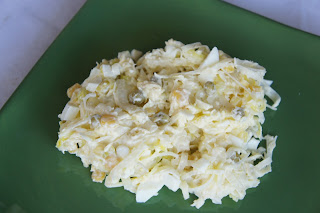 Salatka Z Pora, Leek Salad. This was an interesting dish, it reminded me a lot of "salad" when you say things like tuna, potato, or chicken salad where they use mayo as a dressing, but instead of a "main protein" + hard boiled egg + veggies + mayo based "dressing" you substituted the "main protein" for sliced leeks. The dish works out pretty well, the smoked gouda is hardly detectible but no doubt added to the "robustness" of using leaks instead of a protein. I would do this salad again but next time I would go with frozen green peas instead of canned for more visual contrast. 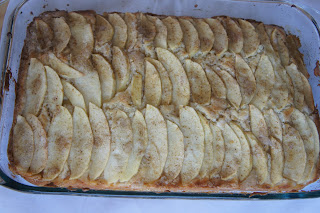 Placek Z Jablika, Apple cake. I couldn't pull the bento off as completely gluten free no one was asking for it anyway so since I don't usually eat dessert this one was full on gluten. For the cake with only baking powder as leavener I wasn't sure how well my GF all purpose would have worked anyhow. The cake was quite dense and I'm not sure I would have made it this way. I think I would have cooked the apples down first and them added more batter (and baking soda) and try for a higher rising cake. But tradition is tradition and I tracked down at least three recipes so "grand mama" did things this way. All that said early returns from my "eaters" was a "that was unusual but tasty!"

I'm thankful I had a chance to cook. I've been spending more time eating so expect a post of the places I've checked out in Austin.