Tools of the Trade: Veggie Twister 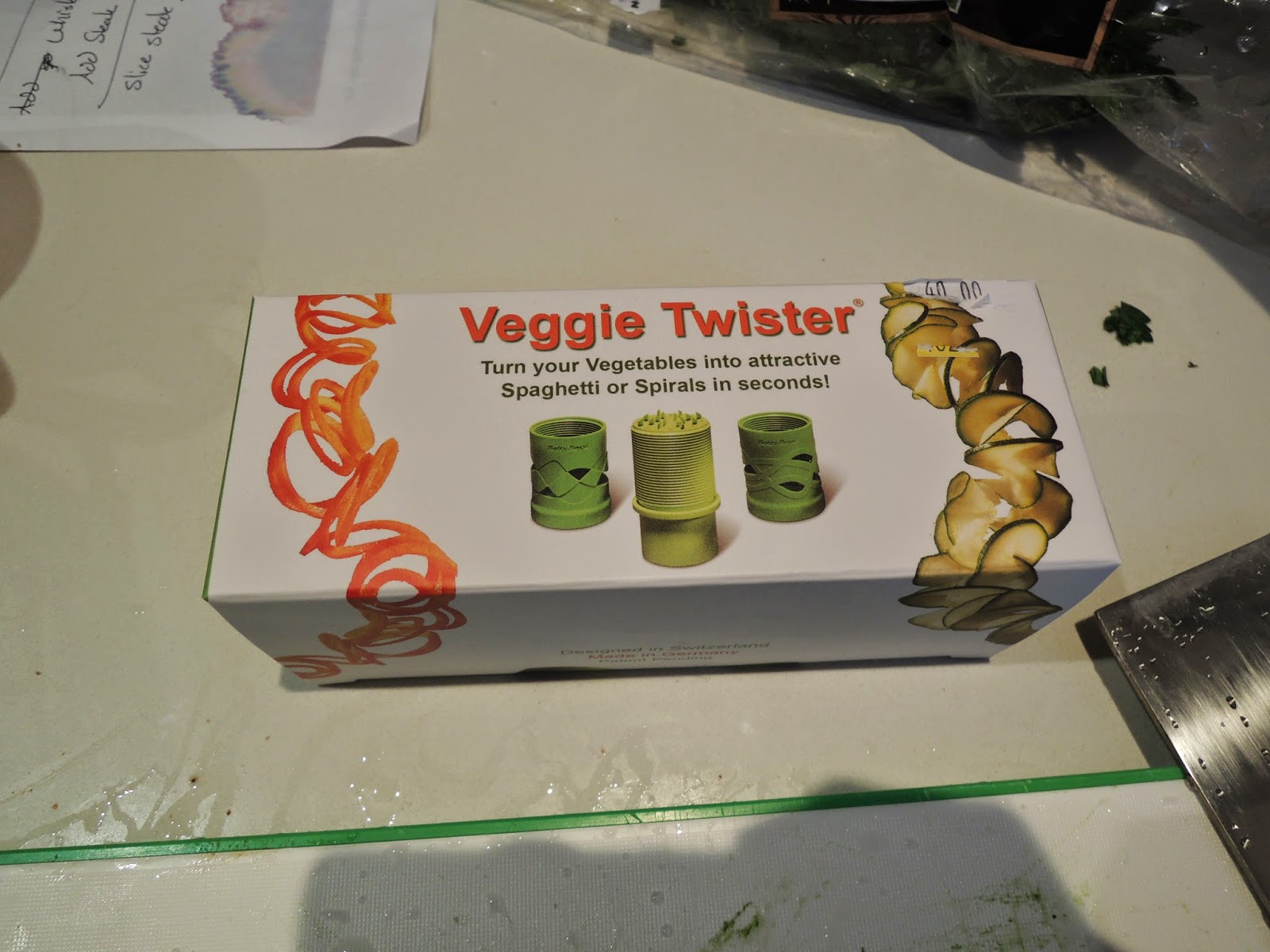 As part of my next post I acquired a new toy! I've posted about a dinner I made with zucchini ribbons as part of the dish and later a bento using the ribbons. Zoodles (ribbons or spaghetti strings) have come into some popularity over recent years because of the low carb trend. Certainly a small plate of zoodles from one zucchini will save you quite a few carbs and calories than a similar plate of pasta. I figured with all the cutting calories and low carb-ing I've been doing it's high time I incorporated zoodles as a pasta replacement into a bento. Since I don't have my full kitchen here I had to find a way to cut my zucchini into noodles (or zoodle-ize them) enter "The Veggie Twister" 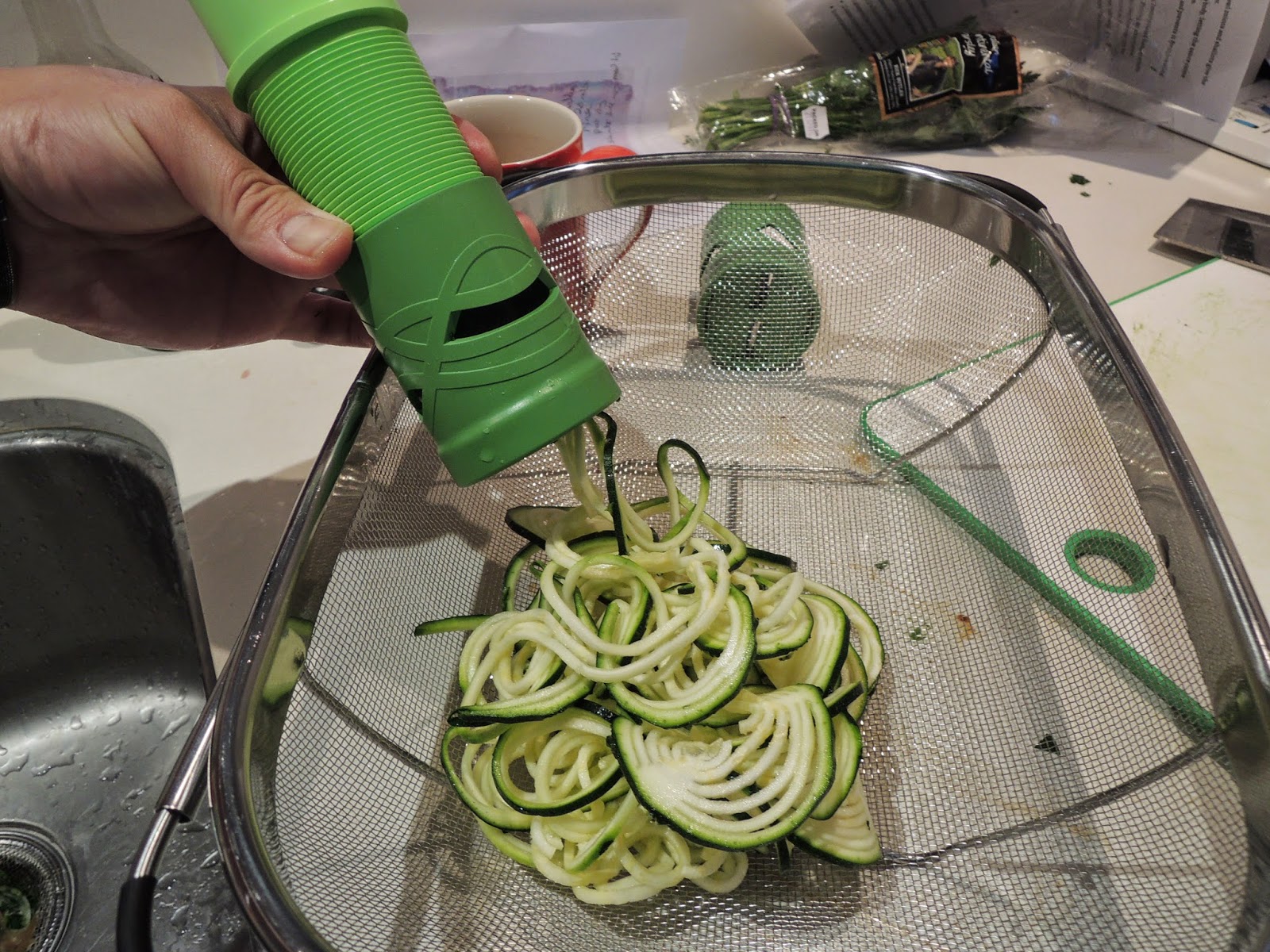 There are many forms of this device, in the US there's plenty of infomercials that sell the "Veggetti", I personally went with a Paderno spiralizer (it was on sale on Amazon once) back home, you can even use a vegetable peeler with a julienne blade. For the dinner I made I used a simple peeler to get the ribbons of zucchini. In the case of the twister, veggetti, and the spirooli/zpiralizer it's simply a spiral slicer. You place the vegetable in a holding device and turn or screw the vegetable in question and there's a blade at the end that cuts it into ribbons, thin spaghetti etc. 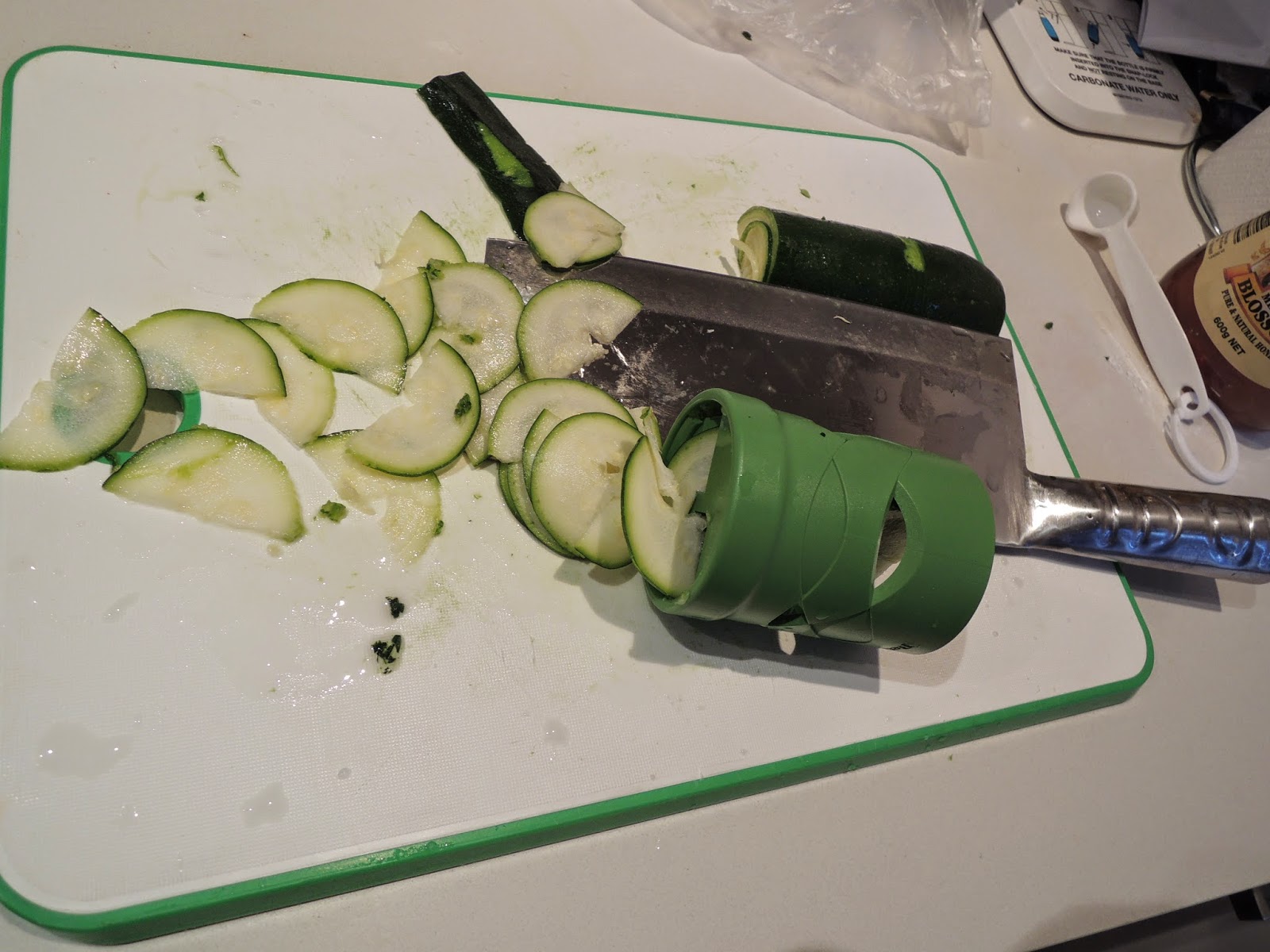 You can even pre cut your vegetables to get other effects. For instance if you cut the zucchini in half it's a quick way to get thin half moon slices. And you're not limited to zucchini (although they make the best "pasta") you can use carrots, radishes, cucumber, really anything you can wedge into the cylinder. 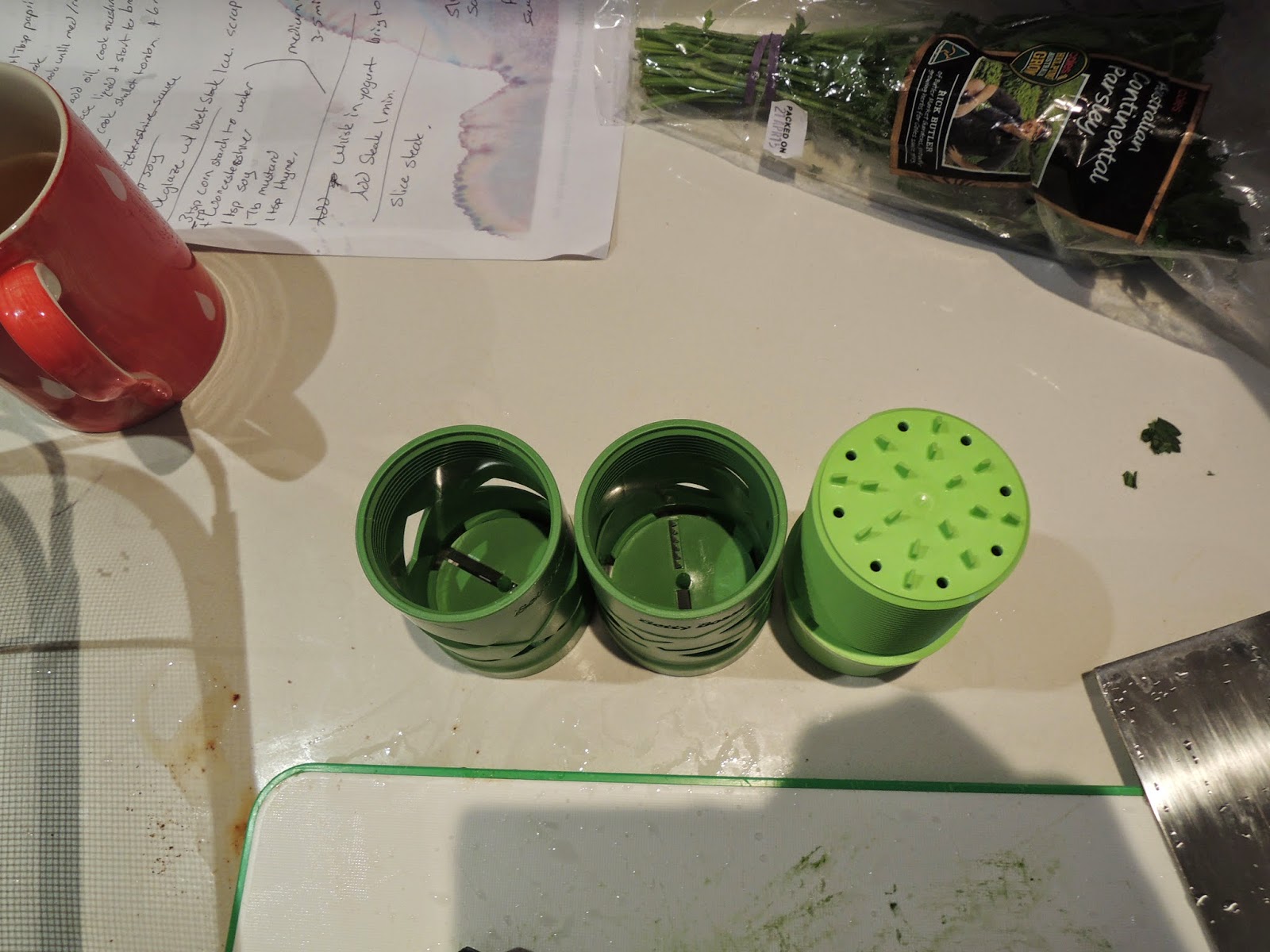 In the Veggie Twister, there are two cutter "ends" one that cuts long flat ribbons and the second that cuts zoodles. The zoodle end has a julliene blade followed by a flat ribbon blade to acheive the desired shape, the ribbon version has two flat ribbon blades. There's a vegetable "holder" that screws into each cutter end as the vegtable gets too short to continue twisting by hand. On my spiralizer when you're done you get a cylindrical "plug" which is the core of the zucchini and most of the soft seeds.  The Veggie twister uses the whole of the zucchini up until the end where you get a flat coin about half an inch thick. I think the big downside here is that cutting noodles that include the seed make the strands more fragile and the less capable of holding together when they cook. 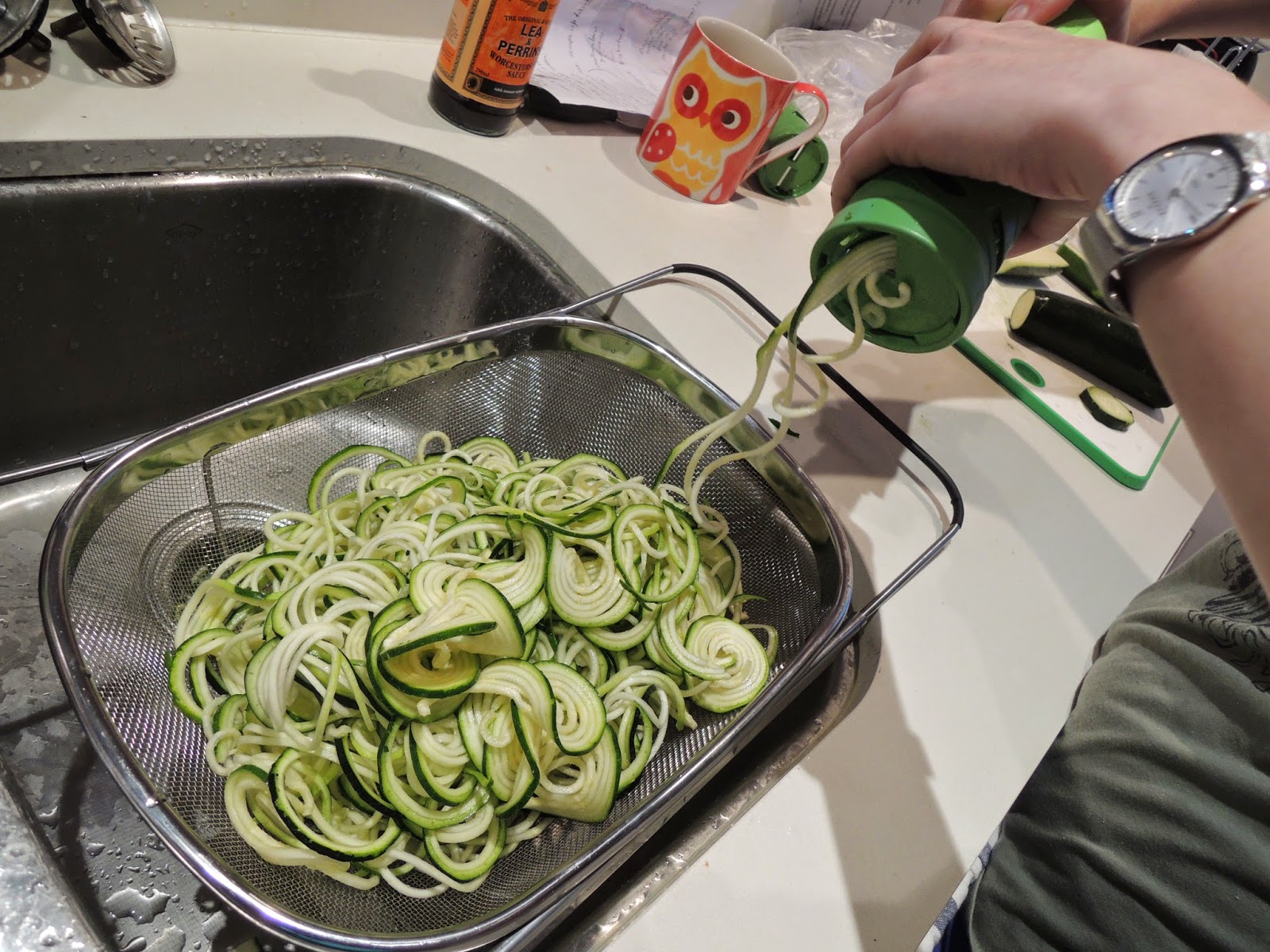 Here is a shot from processing our "4th" zucchini (it looks like a lot, but it cooks down). From here you can choose how to cook them. You can eat them raw, blanch, microwave (2 mins), or saute. It really depends on how crunchy you want your noodles to be (more on prep in the next post). I find that microwaving gets the "softest" results. You just have to be careful not to over cook the noodles or they will simply fall apart. For a quick snack I'll zoodle a zucchini and pop it in the microwave with some marinara from the jar and have something yummy in 3 total mins.

I think it's a great idea, eating isn't only what we taste but what we see and smell and if a visual and textural trick can help you make missing real pasta a little less I see no harm, especially if you're counting calories. Are you going to eat these and say "wow, I can't believe that's not butter pasta"?No, but in many cases pasta is simply there as a way to convey the sauce (in fact many pasta shapes are designed specifically for the type of sauce they best carry) when the pasta isn't meant to be the main star.
noodles tools zucchini