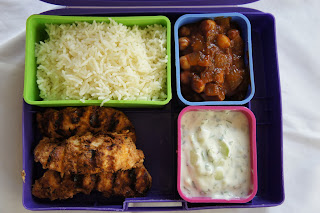 I hadn't intended on creating a bento this week. My return trip from Legoland had me home at around midnight, hardly enough time to get something together the next day. As it turns out this is the last week for one of my regular bento-ers and I wanted to make sure and get her one last bento before she left. I got some inspiration off a "recipe calendar" while visiting my sister's house and built the box around the Indian themed dish. Again, I think this was a record breaking preparation (I'm not sure I can get any faster), I made it into a 24 hour grocery store on my way home and had my battle plan in hand from sketching it out on the airplane.

The main dish was meant to be a kabob, specifically a Chicken Tikka Masala Kabob. I ended up using chicken breast tenders and didn't see a need to skewer them since they were already the perfect shape and size and didn't needs to be held together. This was super easy since I setup the yogurt marinade the night before (just before I went to bed), the ingredients were quite simple. The yogurt did a fine job of tenderizing the chicken. I popped the chicken on an indoor grill for the nice grill marks (I have no desire to stand in the 100+ degree weather we're having). On it's own I think the chicken could have used a bit more flavor, however along with the saffron rice and sides I think it works out perfectly.

I'm told I do a pretty good Chana Masala, I attribute it to the longer stewing that I do with my version of the dish. I've had a couple of "quick variations" pop up over the years that I've been meaning to try. I picked a couple of recipes and fused them together to approximate the flavors that I usually end up with. The "quick" version makes use of tomato sauce (instead of cooking down the tomatoes) and significantly fewer spices (both flavor and heat spices). For a quick version it's quite tasty, since it lacked some zing, I resorted to some ghost pepper sauce on hand to jazz things up. This seemed necessary since the fast cooking time kept the chickpeas from really absorbing some flavor. There's no substitute for doing it the long way, but if you're in a pinch and you need to spin up a meal this is an acceptable alternative. The dish actually provided a nice backdrop of flavor to contrast the tender and less flavor accented chicken. The heat proved to be too much for one of my eaters but the rest seemed to really enjoy the burn and all seemed to agree the bento taken as a whole had a good amount of harmony to it.

To counteract the above burn, I turned to a standard coriander raita. There are many types of raita they tend to vary by region, heck I've done another version recently. I went for the economical route opting for coriander (cilantro), instead of mint since I was already using it in the Chana Masala. Only a few simple ingredients: yogurt, garlic, toasted cumin seeds, cucumber and cilantro. A quick stir and you're ready to go, but if you give it 30 mins the flavors really blend together. Lots of people mix it into spicy curry to cool things down. I actually like it by itself over rice. I really like the toasted cumin seeds for this dish they provide a pop of smokey flavor.


As I said up top I think this is a record, all done inside of one hour, including prep. Four courses for six meals in under an hour? Kickass. But as much time as I manage to save I can't seem to get my stuff together to do a post of my LegoLand trip and I need to post my review on my new camera. But I promise I'm on it.