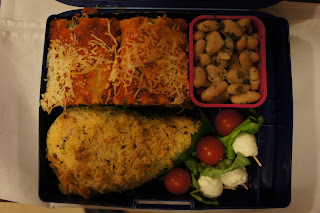 I went with a light italian themed box today, had to really keep things simple since I had guests over and needed to put together something fast . I don't think I was quite as successful this time with a record breaking bento production time so I couldn't call it a "quicky bento". It took me roughly two hours this time (with prep), granted I did handicap myself by making breakfast at the same time for my visiting family. Quite a few additional fails too. I didn't get a good picture of the box and I missed taking a picture of the lasagna, guess I was a little distracted trying to entertain folks. As I've mentioned in the past, if you want to get thru a dinner party (or bento in my case) it pays to be organized. That means prep in stages and much like you see on TV every dish they put together magically has all the ingrediants chopped and ready to dump into a pan. This really beats trying to run from chopping block back to pan and then back to measuring out this that or the other. Do yourself a favor on your next multi-course dinner, break everything apart from preparation to execution and try to group stuff together, it'll save you a bit of time. That and if you have an audience watching you cook you look like one of those fancy TV chef/cooks that somehow make it look effortless.

Today's meal starts off with a Chicken Romano, it's a simple enough dish that packs the main part of the protein in the box. Whole chicken breast is dipped in a bit of skim milk and covered in a breadcrumb mixture of salt, basil, parsley and parmesan. I substituted for some tortilla crumbs since I had these on hand, but it's a simple substitution to make this a gluten free dish. The resulting crust is a bit more crunchy whereas the breadcrumbs would have been a lighter texture.

Had I gone with a gluten free lasagna noodle I would have gotten away with a gluten free box today, but I was already running into budget issues so I went with some whole wheat pasta to at least get a little bit of a healthy edge. These spinach lasagna rolls are a great way to create single portion lasagna instead of the giant pan and serving strings of cheese across your plate and table as you try to get the pasta from baking dish to plate. By far I got the best compliments on this dish. There's probably a billion different versions of this on the web, I just put a few together that grabbed the best of cutting calorie corners (or simply avoid bad fat, and bad carbs). I doubled up on the spinach from any of the recipes I was working with because looking at the volume it just seemed like a whole lotta cheese for so little of the good for you green stuff. In a most of the spinach lasagna that I've had at restaurants the spinach has often taken a back seat and been more like Lasagna (with spinach) if you know what I mean. I really really regret not having a photo of this dish. (guess I'll have to do it again)

Next we have a simple Cannellini beans with Pancetta. It's very similar to white beans I've done in the past. I decided to add a bit more flavor by rendering a bit of pancetta and adding some fresh rosemary from my ginormous rosemary bush out front. It's actually a pretty quick dish since I went with canned beans. Dry beans would have soaked up a bit more flavor since the cooking time would have been a lot longer but since we're trying to balance speed, flavor, and nutrition this is what I've got.

Finally, Caprese Salad on a stick. This was a nice party presentation that I wandered across in a magazine somewhere. It's exactly as you see it, tomato, mozzarella, and basil. I put a bit of cracked pepper on it, but opted not to add any salt I was afraid it would leech a ton of liquid over night so I left it to my bento-ers to add a bit of salt. If I were doing this as a party, I'd either drizzle this with some olive oil, salt and balsamic and serve immediately, or do a quick balsamic viniagrette as a dipping side. I actually like the simple presentation it brings a lot of nice color and variety to the final box.

Ok, no box this next week I need a minor break. I've still got a few more themes that I'm working out minor kinks on but there's definitely more to come. Thanks for dropping by.

Ironjack said…
hehe thanks Carl, good thing this was what they got last week otherwise I'd have someone complaining about a half eaten bento ;)
August 2, 2011 at 10:14 PM