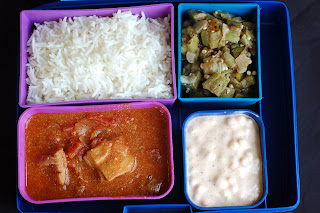 I so love Indian food, I grew up with the cuisine in high school trading lunches with my Indian friends. I like to believe I got the good end, trading my sushi rolls, and fried rice for their home cooked yummies from their mothers (my mom made 2x to help me accomodate my trading)! Anyhow it's probably a good reason why it's been a repeated theme here. I've been collecting recipes hoping for new themes and all the ones I tended to tag recently are Indian. I centered around this menu because they are a departure from what I normally get to experience, new items that I don't always get to see on the local menu.

Butter Chicken shows up in many London menus, I don't see it much here but I couldn't resist when one of the blogs I follow did a fast/budget version that look scrumptious. I went with the more flavorful chicken thigh (instead of breast) which added a bit of flavor. I loved that the recipe called for yogurt to add some flavor instead of the usual heavy cream that most curries asked for. Super thanks to Beth from Budget Bytes for her version of butter chicken to try out. I think it'll be a good "lite" staple to keep in my Indian folder. At first I was a bit dismayed at the flat taste of the dish, but when I finished it with the yogurt it imparted a good amount of creamy texture (without the fat) and a nice sour note. Note I'm not sure how she may have added the yogurt, but it "broke" in my dish leaving white flecks, it was still very delicious. I tasted before and after adding yogurt and it's a marked difference.

Okra is a strange vegetable. I didn't get a chance to review my mentor Alton Brown's show on Okra, I know he discussed how to get by the slimy component of the veggie. I wasn't quite so successful despite my efforts on washing and re-washing the cut pieces. Anywho, I find that the spices and the nice kick from the cayenne did offset my initial reservations on serving the dish. I personally love the duality of textures the vegetable gives me but the dish was hard to work with and I was sure I had failed the dish but the flavors of the spice I added made me treasure the leftovers I ended up with. I still need to work on the slimy consistency (which are normally covered by frying, soups or stews) but I am hopeful I did well here.

Finally, I happened on this Boondi Raita. Usually raita is a quick combo of spices (usually toasted cumin seeds) some tomatoes and cucumber that is very reminiscient of tzaziki. The yogurt side is a nice cool down side dish for most spicy Indian curry. Here the different spices are added and then Boondi, a crispy spherical Indian snack is hydrated and added in for some texture. I took it a bit further and added the crispy (and unhydrated version) in to add a third layer of texture to the dish. It turns out later that the boondi absorbs the yogurt (no need for the hydration step), but if served right away the extra crunch texture was actually fun. The original recipe asked for some black salt, no doubt to add the smokey flavor to the dish. (I didn't have any on hand). I'm happy to say that I could just eat this happy chilled side dish over rice and be content rather than relegate it to a "side dish". I've never heard of this version of raita, but I'm very happy to have clipped it way back when to supplement this bento.
The thing I really like about Indian food is that the spices are always unique and it's an easy "first step" for my less adventurous diners into new foods. I find that spices are usually more acceptable as "new ingrediants" than new meats or textures. Anyhow, I'm glad to have some extras for myself. No doubt there will be an Indian bento five and beyond.

I'm off to Vegas, it's my girlfriend's first visit. I'll snap some pics of food while I'm there. I'm hoping to make it to some of the celebrity chef restaurants to taste some of the wonderful foods I've been hearing about. See you soon and wish me luck on the tables!