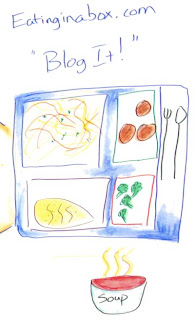 I've been up to a lot of stuff at work and it's kept me pretty busy and unable to tend to my poor blog so I figured I should at least share something fun that I've had the opportunity to learn. Above you'll see a Graphical Recording of my process for producing a bento box. Wait, wha? what's Graphical Recording well it's one function of a larger skill set of Graphical Facilitation. It's a way of designing, facilitating and finally recording a meeting/class in both words and graphics to encourage participation as well as create a group memory. The results create an engaging graphic that captures the details of the meeting in such a way that even those that didn't participate directly in the meeting can understand what was discussed and decided. I think that was the best I could think of as an "elevator pitch as to what I spent three days last week doing", I'm sure someone will post a nice flame chiding me with the real definition. For me it was one part adding to my facilitator toolkit but more importantly learning that doodling and drawing can and are productive things to help engage other people. (I'm not a very good artist and still left impressed with ability to pick up my skills I left behind at the age of five) 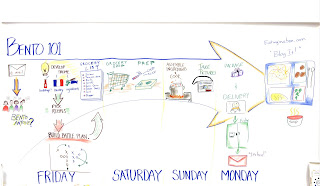 One of our group exercises was to take a member and interview them about a process and have the rest of the group design and transcribe the process onto paper (The paper above about four foot by six foot). This was one of our first exercises on the big paper and it was easiest since it was simply transcribing after hearing about the process rather than real time recording a meeting full of people Since I had a pretty well defined fun process to document I was the "interviewee" (although I did do a bit of drawing on the board once we designed the information architecture.) I was really proud of the result from our team. In one eye-catching and engaging piece of paper they were able to capture what it is I go thru for every bento.

So this post is one part showing off components of our drawings and another part describing what it takes to get one of my bentos out of the door. I actually did a post on this early on but it's kind of fun to see where this has gone (first post on this was in December of 2007 and it was a short one) and how the complexity has increased. In order to cook for (up to) twelve people a four to five course meal takes quite a bit of planning if you still wish to enjoy your weekend. So for the diagram our first order was to break up into phases obviously we broke it out into the four days up until delivery of food.

It all starts out on Friday, hopefully by then I have a theme in mind and even some dishes I've been exploring. Sometimes I draw from a backlog of ideas that I've got tagged as "future bento" in my notes software other times as I've mentioned, I've taken a trip and one of the many food magazines have managed to catch my eye. It might be a country theme that has been on my mind or in the news, ingredient, or even a technique. I usually pick out some interesting concepts and recipes from the theme to give me a general sense of what I'm going to design. I also send out an email to a giant list of people telling how many spots are open. (nope I don't tell them the theme ahead of time, it's blind faith time people!) It generally fills up pretty fast the fastest was 30 seconds the slowest was 30 mins. Finally that evening (or early Saturday) I build "The Battle Plan", I know ominous right? Well it's a detailed plan which tears apart every dish and recipe (post any alterations) I plan to make and assembles them in the order from prep to plate and I shuffle them in order so that everything is working in parallel. It's somewhat a leap of faith when I actually execute "The Plan" because half way thru you aren't quite sure where all the dishes are you just know when you are done with the plan it comes all together. This really involves a lot of historical estimation so I know I'm going to be able to pull things together or when things should start at the same time so they end near each other.

Out of the plan I also build the grocery list. Saturday is pretty uneventful it usually involves doing my shopping for the bento and is usually spread out between my local grocery and maybe some specialty stores (depends on the ingredients and theme). I spend a little bit of time doing the prep step of "The Plan" this usually fills my fridge up with a bunch of containers of chopped veggies and sauces that would be used the next day. It is a pretty fast step, but I try to balance it, the more prep I do up front the faster Sunday goes (and less hustle and confusion) I tend to get lost if I jumble everything to Sunday. I use to take one big breath and do everything from menu to end all at once but then I found I would be completely fried and the point of a relaxing weekend would be lost on me. That type of day essentially turned what was a joy into work, so I found a way to make it less stressful and more predictable to finish. Working in stages lets me add more to a stage in order to compensate for unexpected episodes (oops forgot to buy an ingredient, "this is more labor intensive than I expected", "oh that's not gonna be good, how to adjust?")

All of this planning makes cooking day a snap. I'm usually in and out pretty quickly if you count actual direct cooking time. If anything takes time at all it's because I've got stuff cooking sous vide or a in slow cooker at which time I have morning cooking (prep #2) and final cooking (finishing and plating). As each plate pops out and completes I keep a stand and some background drop cloth and do a model plate to snap a pic. After it's all done I wrap everything up and stuff it in the fridge. We skip a step in that I usually take a moment to outline what I'm posting for the blog and upload the photos I've chosen as well as write my "letters from mom" that I tape to each box. All that's done Sunday night before I hit the hay.

All that ends with driving and delivering the boxes and sending an email before I make my way into my first meeting at work. Ding! Done! Ok not quite, there's the step of collecting boxes and what not but that's an after step that is the prelude to starting the whole merry go round again. I'm particularly proud of my driver guy (right). For the drawing phase I was in charge of the "Monday" section and the pre-school rendition of the bento at the title. Before you give me too much credit the shading was done by someone else (far more talented than me)

Anyhow, I'm happy to have had a chance to take this class. I learned a lot of things that will help me with my day to day work life. Hopefully you found the post entertaining. I'll be working on the next bento and digging up a theme we'll have to see what I come up with. In the mean time thanks for visiting!
off topic process tools yammering