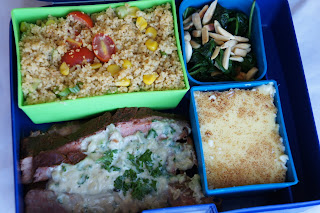 On facebook one of my friends pointed to this Cooking light dish featuring a nice Chipotle Rubbed Flank steak. She proclaimed if she were to start eating meat again it would be chopping on that dish. Looked like a keen enough menu to me so I went ahead and decided that it should be lunch for my bento-ers.

The Chipotle-Rubbed Flank Steak did look pretty yummy. I had to take it the extra mile and do a 24 sous vide treatment on the steak. It's pretty much a slam dunk using the sous vide for a couple of reasons: 1) Doesn't eat up a stove or oven 2) Flank steak has lots of connective tissue and fat that benefits from a long slow cooking process. The rub was pretty simple, powdered chipotle and paprika for a nice smokey flavor and a bit of salt for some accents. The Gorgonzola sauce was out of this world, not too rich the recipe called for 1% milk but it was a perfect complement to the spice rub on the steak.

The "menu" showed a couscous looking side dish that they didn't elaborate on or even name so I had to improvise and make my own. I decided to keep with the southwestern theme and flavor by so we have a nice cumin spiced couscous. I wanted to keep with my mantra of simple and fast so I cooked the couscous in chicken broth for some added flavor and tossed in some frozen corn, grape tomatoes and green onion. It doesn't get simpler than that.

Finally for dessert I went searching for southwestern dessert and I liked this variant on flan called Jericalla (Cinnamon Custard). Originally it was to be cooked in individual ramakins but since I had to do eight (and I didn't want to send out my nice ramakins) I cooked it as one large baking dish. I ended up using the broiler dish to set up a bain marie, that is to say I surrounded the custard baking dish with warm water to gently apply heat rather than direct baking. This is useful for custards to prevent the egg in the custard from curdling. The dish came out quite nicely and reminded me of the texture of soft silken tofu. The spare use of sugar made it very light.

Sorry, it's a sparse post but there's not much to say today. Gearing up for the 4th of July so no bento next week but as usual "I'll be back". Have a good holiday weekend for those of you in the US for the rest of you, um have a good weekend!