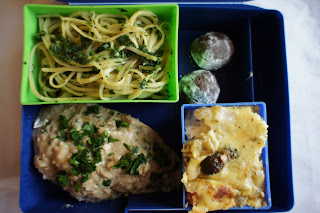 Little ditty about Jack and Diane. Two kids growing up in the American heart land. Unfortunately that's about all the similarity this bento has with it's namesake. No chilli dogs and shade trees here I'm afraid. It's been a while since I did a fun theme name so when I had the chance I pounced on it. I get a whole lot of inspiration whenever I go on a trip, this recent trip to Vegas was no exception. I always load up on food magazines for the flight and rip out (and later scan) the recipes that seem appealing, making notes on future themes and flagging new techniques to follow up on. This trip had some great "easy exquisite" dinners for two, certainly a great seed to start up a bento.

Oh starting this post all my pictures are being taken with my nifty new Sony Nex-3. My poor beloved Nikon is starting to fail on me. The shutter keeps sticking and the only way out is to yank the battery and restart, the bad part is it's in the middle of a write operation on the memory card and starts corrupting it. I'll try to get a review in on my new camera and go over my "pick process" for any of you that are considering moving from SLR to the mirrorless NEX and micro four thirds format.

Chicken Diane was the seed recipe (along with the pasta below). Given the "Diane" my brain instantly starting playing the old 80's song Jack and Diane, it's been stuck in my head ever since I concocted the idea to name my bento "The Jack and Diane". I may be doomed as it's even now playing in my head as I'm writing this post. Yes, never mind the fact that the Diane in "steak Diane" is named after the Roman goddess of the hunt. Ok, where was I? Oh yes, about the dish I made some modifications, the chicken I sous vide'ed and then seared off because 1) sous vide produces superior results and 2) one less burner to take up while preparing. I finished the chicken with the sauce which comprised of some shallots, brandy, a sundry of other little things and some cream all "steak diane style".

I followed the entree with the suggested linguine in truffle sauce. I had some truffle infused olive oil held over from a gift and added a bit of butter for some body. This was a nice simple pasta dish that got dressed up with the truffle oil. The greens were a courtesy of parsley and chives. This was nice because the quick re-heat didn't break the sauce and gave a full filled aroma of the expensive truffle without actually adding the "worth more than it's weight in gold fungus", course with the price of gold these days I'm not sure that's still a true statement. Anyhow, this is definitely an easy but elegant dish.

So this is where the challenge really began. How do you incorporate Jack in a "Jack and Diane Bento"? Quite a few things came up while I searched for ideas, a lot of the "named" dishes didn't make sense "Jack's favorite blah blah blah" I mean if I went with that then I could simply cook whatever I wanted so I went with ingredients. Monterrey Jack cheese vegetable bake was a nice start not too heavy not too light. I cut the butter in half and used half the eggs with just the whites. It was like a frittata and pretty popular with everyone. I doubled up on the recipe because the serving size showed six and I was cooking for ten this time. Turns out a single recipe was more than enough for twelve given the portion size that I delivered.

Finally for dessert I went with good ol' gentleman Jack. These whiskey balls were on paper looked nice and easy but they turned out to the most labor intensive part of food production this time around. The "cookie" was really sticky and difficult to roll out. I tried adding more dry ingredients to make it easier to roll. Once cooled in the fridge they were fine. I was on the fence about the taste (just because I'm not a sweets person) but everyone I've spoken with loved it and the extras got snapped up immediately. No amount of corner cutting could put these in a "healthy" category, I just had to limit portions to easy my conscience.

"Hold on to 16 as long as you can!" Ok I'm gonna go and try to find some other song to get stuck in my head now. I've had enough Mellencamp, do you hear me?! Fun theme, I enjoyed the challenge and again this was a fairly quick meal to produce (minus the dessert)

I've been meaning to do a post on Vegas and I have a few more things queued up.

joixdevive said…
Hey Jack,
LOVED this bento, thanks! Would you mind posting the recipe for the Jack Daniel's Whiskey balls? I'd love to make them for a friend's birthday extravaganza.
Thanks!
Tiff
June 24, 2011 at 12:19 PM

Quickly roll in powdered sugar and place on a lined baking tray.

Tip: The mixture is extremely sticky (I upped the wafers to one additional cup) keep your scoop and hands wet or it will get all over you.
June 24, 2011 at 2:35 PM