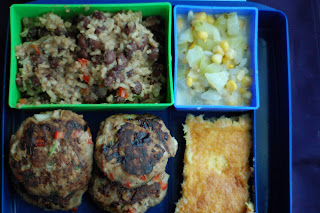 Well naturally after a trip to Costa Rica I *had* to do a bento on the subject. To be fair the only thing I did eat there that was in this lunch was the Gallo Pinto. The real inspiration is courtesy of my friend Kelly who picked me up from the airport and took me to his favorite bar for some Chifrijo which I talked about earlier. Kelly was nice enough to score me a book of Costa Rican traditional dishes, his estimate was that it was more like the normal day to day stuff that folks would cook in their own kitchen nothing too fancy, right up my alley.

We start our meal off with Tortas De Carne, or simply put beef patty, I like to think of them as squashed meatballs. I will say one of the hardest things about this bento was sourcing some of the ingredients. I had the forethought to bring home some Salsa Lizano a local variant on Worcester sauce that the local use on *everything*. It's thicker than Worcester sauce, has the same tang but has a slight spicy component that makes it interesting. The other "spice" mix that was called for was "Complete Seasoning". Apparently this is actually a well known "blend" and I was lucky enough to find some in the ethnic aisle in one of the larger markets here in town. Anyhow back to the beef, lots of cilantro, onions and red bell peppers complement the spices and they were quickly pan seared. The Tortas were very flavorful and the sear insured a moist patty.

Next up, probably the only dish that I actually ate in Costa Rica, Gallo Pinto. This is considered the national dish of Costa Rica and don't let the looks deceive you it's not just black beans and rice. There's actually a fairly large ingredient list to bring out some of the complex flavors of this slow cook dish. Again we use the Salsa Lizano and a bit of Worcester sauce. Ultimately, I failed on this recipe, not everyone thinks so, but deep down inside I *know* so. See I'm going to let you in on a little secret: Asians, or at least the ones I know including myself, we don't know how to make rice in a pot. No, really! Why do you think every asian household has a rice cooker, it freaking does everything for you. You just need to measure the water properly (I don't go with the markings on the pot, I use my mom's back of the palm trick) hit the button and it pops up as soon as the rice is done. Wait 10 mins, unveil and you're done. My gut told me to use the rice cooker, the stove is temperamental, but I didn't stick to my guns and went to the stove anyhow. The rice was a *bit* under cooked. I covered for it by adding more water to the beans and cooked the rice in longer. It fixed most of the problems but not all. I still contend that the stove is the crappiest way to prepare rice we have technology folks, you don't see me rubbing two sticks together to make fire do you?

Ok enough rant. The next dish is called Guiso De Chayote Con Elotes Tiernos or Corn stew with tender Chayote. I've never worked with chayote, it's got a very neutral taste, it's consistency is somewhere between a cucumber and broccoli stem. This is a very simple dish that is easily overlooked. The flavors were not as bold as the other items in the box, it's a simple veggie side. Personally this was my favorite in terms of balancing healthy and taste. The vegetables were simply simmered in milk until tender and treated with a bit of salt and pepper.

The soup features the Pejibaye that I bought and later improved into a dish. Kelly impressed upon me how good this Crema De Pejibaye soup was and if I had the opportunity that I should make it. I had my doubts on obtaining pejibaye, I scoured Austin and finally was able to find some at the local ethnic market jarred in brine. Apparently pejibaye is named different by region and country so I almost past up the jar but the visual on this fruit caught my attention. I won't say that this was the healthiest of soups but I will say I was surprised that it didn't rely on heavy cream or copious amounts of butter, rather some good old Cream of Chicken condensed soup. This was possibly the most popular part of the bento, folks really liked the creamy texture and the nutty flavor imparted by the pejibaye.

Last but not least is my quasi dessert. Pudin De Elote or corn pudding. This was very simple to put together, condensed milk, corn, and egg, yeah that's it. It's hard to describe this dish, the consistency was like a flan or custard. The corn flavor was very distinct which is an unusual quality in a dessert (hence me labeling it a quasi dessert). Folks seemed to like it just fine so I guess it worked out. I'm not a big dessert person so I found it a bit sweet for my own tastes.


Fun bento this time around I'm glad I've been able to at least get out this one bento this week. The next few months will be very trying when it comes to posting about cooking. I've got several trips for work through September, but I will get a chance to blow through Denver, Orlando, London, Paris and Marseilles. I'll be lucky to get in two bentos from now until the beginning of September. If I'm feeling really plucky I'll go for three. I will try to post from the road, and I'm having folks over for some some collaborative cooking, look forward to a post on that.

Ok, thanks for reading!

Carl said…
I think the rice story is funny. I also have found when cooking that you should follow your gut. Great Post!
July 13, 2010 at 4:24 PM

Ironjack said…
@carl many thanks! thanks for coming by. Yeah the liquid ratio looked right but I think the sheer amount of rice required some watching over that I could have delegated to the rice cooker.

Enjoyed reading your blog about Costa Rica. I just got back from San Sebastian,Spain and London and will be trying to recreate some of the Basque cooking we had. It was delicious.

Ironjack said…
Hey ya Cindy!
London has some good food if you look really hard, it usually some a foreign cuisine. I'm going to try to hit a 3 star indian restaurant this time around. I can't wait to hit Paris or at least the markets!
July 21, 2010 at 10:20 PM