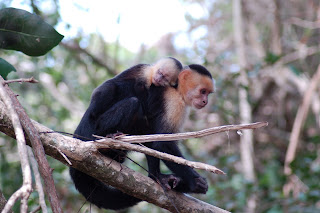 My second segment of my trip here to Costa Rica. It's beautiful here. Above you see a Mother child monkey, I call it "monkey in repose". They look cute, but they all scheme to steal your stuff. Believe me, I witnessed one brazen monkey stare straight at me as he/she snatched a bag and took off. Little buggers. I've been told they'll work in teams to steal a heavy bag. I'm amazed at their expressive faces. Anyhow, more amazing food and experiences, and this with taking a whole day to do nothing. I didn't anticipate nothing to still yield delicious food. 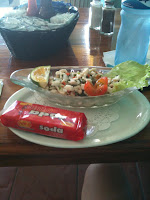 Yesterday I went to the Manuel Antonio State Park. That's where the monkey picture came from one. If you ever go to Costa Rica and go to this state park, I recommend a guide. I actually made the mistake of taking my best camera thinking my lenses would give me an advantage. Apparently, the humble point and shoot thru the telescope of the guide does better. Despite everyone's recommendation to tag on to the guides that go thru for free, a guide is superior as he/she sees things that are un-seeable then takes the trusty telescope to give you the awesome picture. There was this one cricket with the most amazing colors, less than 1/4 inch long and my guide spotted it ten feet away. Try where's waldo standing on a satellite. Anyhow, after the trip I stopped in and grabbed the ceviche you see above. I liked it, trying it with the local favorite sauce Sauza Lizano was a nice change. The lime wasn't overwhelming and I enjoyed the ceviche, for those taking notes it was the Marlin restaurant at the entrance of the park.

I came home and decided to make use of my bounty from the farmers market. First a word on the featured ingredient: Pejibaye. I've heard a bit about this fruit. It's savory rather than sweet as you expect it. You have to boil it before it's edible. The best way for me to describe this fruit is a salty version of a roasted chestnut. It's pretty unique, it's edible with skin on although the locals tell me the right way to eat it is as a "bocas" (appetizer at a bar) dipped in mayo. Having no mayo I didn't give it a try but in my minds eye the salt with the fat of mayo would be delicious.

So I decided to ironchef this one and take what I had from the market, what I whimsically decided to buyand, a somewhat bare kitchen to see what I could do. You can see my mise up top. I roughly chopped, garlic and onion and the Pejibaye and used the tinned smoked octopus. I used the vegetable oil from the tinned octopus and sauteed the garlic and onion. I added the turmeric relish and some salsa lizano and pan fried the pejibaye. I finished the dish with the octopus. I popped out some rice and threw in a can of mixed vegetables. Not bad for impromptu, the salsa lizano was actually a great acid it's a weird take on Worcestershire sauce. The combo of the tang and salty from the fruit worked as I had imagined it in my head. 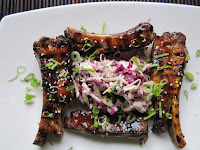 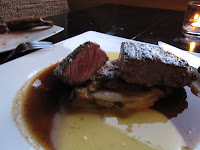 Went off to the local restaurant Kapi Kapi for dinner today. I started with asian ribs, the cole slaw was quite tasty, and I'm happy that the marinade they used on the ribs wasn't over powering. I ordered the Argentinian steak that topped the sweet potato, yucca, and potato gratin. Yummy stuff and excellent service. The steak was very moist and finished better than some of the place I've had in Austin

Finally dessert came from my friend Mauricio who is taking care of my arrangements here in Costa Rica. The brownies were a nice touch. I know I hate sweets, but they were tasty and a nice kind gesture to brighten the day.

Ironjack said…
No, I was warned far in advance that the monkeys were crafty buggers. I even brought some climbing slings and a carabiner for the purpose of securing my stuff. I'm certain however they would figure it out. If nothing they would use the zippers to open up the bag, they have very nimble fingers.
June 22, 2010 at 7:26 AM

Christine said…
Great to see you're still posting from Costa Rica! Also got your message the other day. The food pics are very inspirational, can't to see how you incorporate them into your blog. Glad you are having such a fabulous time! -sis
June 22, 2010 at 1:30 PM