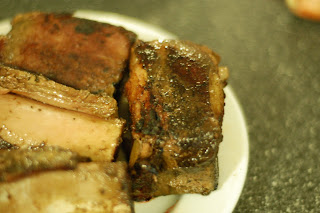 So I hosted what I dubbed a "Sous Vide Summit" at my house this weekend. What does that mean? It means getting a bunch of foodies interested in Sous Vide method of cooking, the result is a meat-a-thon of unbelievably tasty treats. I had a great time and am very glad to finally be back in the swing of having dinner parties. Although a bit of work prepping and cleaning, the fun with friends new and old is always a blast. Lots of pictures to share today so hang on to your hats for what probably will be a long winded post.

So to start, my own contribution to this shin dig was possibly the easiest (not that seasoning, vacuum sealing food, and dumping the package into perfectly controlled water is hard by any means) my experiment was to show case various grades and cuts of steak each cooked at the magical perfect 134 degrees Fahrenheit or better known as Medium Rare. If you click in you can see the steaks raw side by side, we have from left to right, three rib eye steaks USDA Prime, Choice, Select (great, good, ok) and two Sirloins USDA Prime and Select (great, ok). I popped them into the Sous Vide Supreme for two hours and finished them on the cast iron. The result is what you see on the right. Top two (left to right) Sirloin Prime and Select, bottom three (left to right) Rib Eye Prime, Choice, Select. General comments were that all the steaks were amazing, there was a split on picking the winner between the buttery goodness of the prime rib eye versus the big beefy flavor of the equally tender prime sirloin. We had general agreement that sous vide-ing turns most cheap cuts of steaks to be pretty darn awesome.

You can see the table full of meat we had and that only covered my stuff. We ended up creating the "overflow" table of "old" food as each course new course of food displaced the current set. My other contribution was Gordon Ramsey's famously simple broccoli soup (a hit).

Next up my new friend Paul of Xesla who brought the most amazing array of food (and gear). You'll see above his sous vide rig, it's a rice cooker with a PID controller that basically cycles the rice cooker on and off to hold the temperature stable. His other cool piece of tech is this small traveling plug in fridge he said it was meant for car camping. I'm going to need one of these.

Ok on to the food. Paul brought duck rillet, home cured pork belly, ham hock terrine, and his sous vide contribution of three day beef short ribs (grass fed organic, HEB brand, and Randal's brand). Most impressive, the rillets over his home made sour dough ciabatta bread was awesome a brilliant charcuterie showing. The short ribs (title picture) were of course fantastic, Addie (of Relish Austin) was the first to guess (correctly which short ribs were from where) I seconded the motion. The Grassfed definitely had a better and richer flavor, the interesting bit was that the Randal's short rib came out very dense. Of the three the grassfed held up to reheat better, the Randal's came out too dry. I did confirm one interesting fact, finishing meat on the cast iron causes lots of smoke, but not enough to set off my fire alarm but, if there's black pepper in the crust it will set off the alarm. I suspected this, but this third time around clinches it for me ;)

Paul did a post on the event see it here.

Ryan (from NoseToTailAtHome) was up next with an spicy asian marinated pork belly and a normal salt and pepper pork belly. Both were sinfully tasty, we were a little disappointed that the marinade did not seem to take on the pork belly. If I'm going to try my hand on this one, I may go ahead and finish on a cast iron, I think the fat could use a bit of sizzle to bring out some more flavor, but that's just personal preference.

Kent brought over a Shoulder of Feral Hog, which he later shredded and tossed with a Asian chili sauce. The flavor was fantastic and of course the pork was extremely tender. I loved the flavor of this one, I think as a pulled pork this actually yielded a better result than my lexington pulled pork bbq. The only thing missing would be the bark which you couldn't really obtain by cooking sous vide. Kent also brought over some Shrimp vacuumed in with some butter. The shrimp was amazing, it really retained a lot of that shrimp flavor since it was cooked in the pouch and not lost in a boiling process. Finally he served some soft cooked eggs, as always these eggs come out perfect, the yolk is like a custard perfectly cooked no hard spots.

Onwards to dessert! My picture of the peach crumble by Addie was blurred (sorry) I think one of the others got a good picture so either i'll post a link over or ask to borrow their picture. Paul of course comes in with Fennel and Pandam ice cream and a block of dry ice and asks for the use of my kitchenaid. I've heard of this method of making ice cream, but this was my first time witnessing and tasting it. The ice cream was actually kinda fizzy tasting, very delicious and interesting. Michael of cookingforengineers brought by some fudge made famous when the NY times did a piece him.

This was so much fun. I might have to do this one again, maybe even pick up a PID controller and cheap rice cooker and have two rigs for myself. Big thanks to everyone that came over it was so great tasting everyone's creations. Look forward to more dinner party posts.
beef dinner party off topic pork pulled pork seafood shrimp sous vide yammering

Ryan said…
Oh wow. I really thought I had made a comment on this post. Maybe I dreamed it.

Ironjack said…
@Ryan I had a great time too. Thanks for pushing it into reality! We'll have to do more of these science experiments.
August 13, 2010 at 12:10 PM