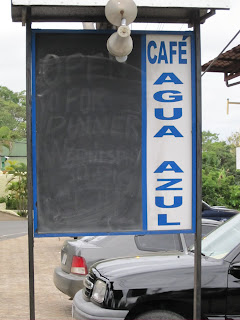 Ok So I'm on vacation in Costa Rica I've had precious few meals here as this is only day two of the trip but it's been amazing so far. So much so I feel the need to post some incremental off topic pics of the stuff I've had so far. What all did I do today? Ok, well walked down to the beach (was a steep hike) watched some monkeys eat breakfast and star quizzically at me (and they do take siestas in the heat of the afternoon). Go into Quepos and check out the farmers market. Played hide and seek with Red Faced Spinetail (we were playing the clucking game, me clucking to entice it to show). I watched a poor hermit crab roll down stairs as it hid from me in fright (it was ok, he made it to the beach). And I sat by a pool and read; this pool was edgeless and it over looked the freaking ocean. All that before three. I've just finished dinner just in time to hunker in for the brief evening rainstorm which is the hallmark of the "green season". Man I'm having a good start to my vacation 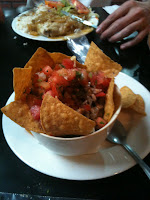 My friend and co-worker Kelly picked me up from the airport and took me to his favorite bar. It's a motorcycle repair/creation shop with a bar inside. I now want a motorcycle. Apparently in Costa Rica the dish to your left chifrijo, is one of those staple pub grub dishes. Everyone makes their own version and everyone prides themselves on having the best chifrijo in Costa Rica. The dish is a combination of rice (cooked in chicken broth), red beans, fried Pork Belly (not pork rind kind fried, meaty kinda fried) and pico de gallo and served up with tortilla chips. I loved this little dish, it'll set you right after a big night of drinking. My friend Kelly, got me a Costa Rican cookbook (in english) so there will be a Costa Rican bento in the future. 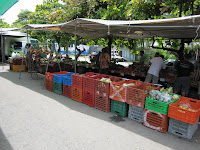 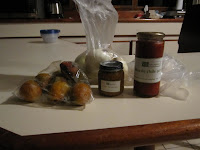 Above you'll see the farmers market that I got to check ou,t picked up some cool Pejibaye (a savory fruit nutty in flavor, I'll let you know when I break them out tomorrow) and some nice hot sauce and a curious Crema de Curcuma. If anyone knows how to make this Crema de Curcuma please talk to me. I'm gonna try to go back this next Saturday and use my severely broken (re: non-existent) Spanish and try to get it out of her at least the list of ingredients. It looks like whatever the relish/sauce has been cooked in oil. I'm very impressed with the stuff and I can 't seem to find a recipe. The vendor jars it in re-used jars, but it's not been pasteurized (from my jarring lessons) so I'm sure border guards will stop me if I bring in a big jar of it. 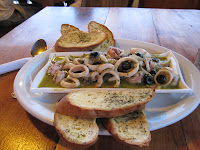 Mauricio, my guide here in my stay at my bungalow sent me off to Aqua Azul for dinner tonight. Great atmosphere, open air overlooking the ocean everyone was so very nice. One can't ask for much more. I ordered two things tonight. The Calamari and a Panko crusted seared Tuna. The Calamari is served broiled with olives instead of fried as we're use to in the states, it comes with toasted herbed bread so you can eat it bruschetta style. The broth was amazing, I couldn't stop sopping the bread with it. I could discern a touch of butter, oregano, thyme and rosemary, the broth I bet was a stock from the mussels they served that they used to deglaze the pan after cooking down the onions. 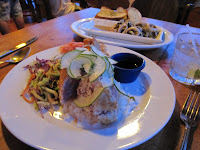 The tuna was equally delicious, it was served with a vegetable medley "slaw" which had carrots, red onions, cabbage, and roasted zucchini strips, and a Rangoon filled with queso fresco and caramilized onion (less heavy tasting than the stuff we get in the states). The tuna was the feature of the show, I asked for it to be cooked rare and so it was; the ruby read Tuna was so moist. The panko crust was a great texture and the fish was amazingly fresh. The ponzu sauce served with the dish (and dab of wasabi) gave the fish the right amount of salt.

I've had a perfect day of picture taking, relaxing and taking it easy, and this is only day two, what else can be in store for me! I am happy beyond words! I think the best tip for me today was: in the rain forest if you want to see something just stop and stand still for a few mins they always come out when they think you've gone.
costa rica fish off topic seafood vacation