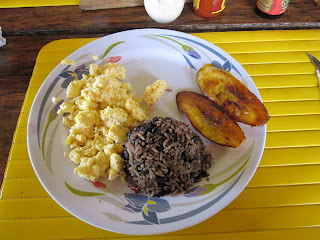 Part three of my culinary adventure in Costa Rica. I'll admit, I could have gotten more out there on the food, but between my adventures and trying to relax, I didn't get to everything I wanted to try. Above you'll see the breakfast I've had pretty much every day I've been here. The typical breakfast consists of scrambled eggs, pan fried plantains, and black beans and rice maybe some tropical fruit to round it out. Although this sounds quite mundane, it makes a lot of sense plenty, of carbs to get folks ready for a hard days worth of work in the palm fields, farms, and ranches. Rice is featured everywhere in the cuisine here, rice and chicken, rice and beans, rice and beef. The Gallo Pinto is very tasty, bits of cilantro are evident and I believe they use chicken stock as the base for cooking the rice. It's considered the national dish of Costa Rica, but I'll admit after about five days one does crave a bit of variety for breakfast. Sorry in advance about the dark pictures that follow, I only had my point and shoot with me and I didn't want to stand out by using flash so this is as good as I could get it. (which all considering ain't that bad) 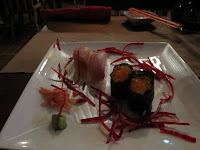 I have a few meals left here, I went to the local Barba Roja it's considered one of the better sushi places to hit, but again, you don't go to a brick layer to buy diamonds so I was here to sample the local fish and I wasn't disappointed, I ordered the "blanco marlin" and some ikura (I felt the need for some salt). The marlin had a great clean meaty taste, not much fat it looked like yellow tail but had a leaner taste much like a snapper. I humbly submit I could have gotten behind the sushi bar and taught the chefs a bit on sushi rice, it was a bit over cooked and seasoned incorrectly. Again, I can't fault the place, you don't go Chinese restaurant and order a creme brulee, you're just asking for disappointment. Don't start nothing won't be nothing. 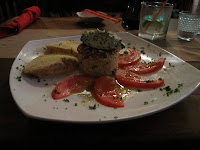 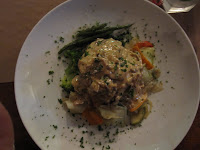 Next up I ordered an appetizer and main course. Curry Crab is the appetizer. I think the topping was a compound butter of coconut and parsley. The crab was dressed with a mayo/cream and raisins. I liked the sweetness, but since they had coconut in the description I was expecting a thai coconut curry, but they used a curry powder. The main dish was a beef tenderloin with a mushroom sauce. They did a good job getting me the beef medium rare and the mushroom sauce was very tasty. They served the whole thing over some creamy mashed potatoes (which went well with the sauce) and a bevy of steamed vegetables. I enjoyed the meal, of the places I went I think it might come in last place because it seemed to be over priced for what I got. 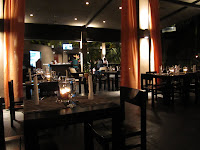 Ok I did manage to sneak in one last place to eat before leaving. It was recommended by my hosts that I check out Karolas. It's newish (I think the manager mentioned only a few months or something) and they described it as being fancy. I'm always a bit suspicious of high-end restaurants in tourist locations so I had a bit of skepticism going in. The service was a bit slow, the place was deserted and it was 6:30pm which did not bode well, and I think my waiter forgot about me after he fed me my drink (He did apologize for the long wait to take my order and was completely on the job during the rest of my meal). Granted it was raining pretty hard and it was a Sunday, so I shouldn't have expected much in the way of traffic. The place was well decorated, like every place else it had open air seating. But I will say my hopes were fading. 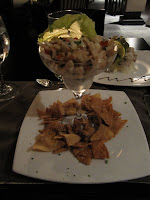 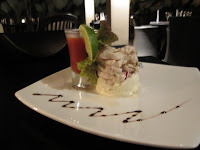 I ordered a couple of appetizers. On the left you see the Heart of Palm Cocktail, it was a delicious little salad with bits of blue cheese and a basil oil dressing. It's kind of a play on my favorite "Jackson Salad". Very light, the textures and flavors were very refreshing. Things started looking up. Then came the Ceviche Karolas, it's strips of fresh Mahi Mahi served over a potato salad and accompanied with a house sangrita. The waiter inquired if I liked spicy food, and brought over some Sambal Ulek. Ok, the combination of the sangrita with the fish and potato were perfect. The potato and the sangrita perfectly counter balanced the lime juice, add in some of the Sambal Ulek and it was perfect bite of food that packed a punch. This was delicious! My estimation of the place just went up big time. 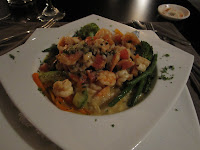 Finally out came the Shrimp Curry. I know, "shrimp curry? what? you're in Costa Rica ordering indian food? seriously?!", it just looked like the tastiest thing on the menu and I was right. This was the most fragrant dish I've had in quite some time. The curry was amazing I was trying really hard to detect everything going on, I even made video notes so I could re-listen to my first impressions. Spicy kick of black pepper seeds, the lemony taste of coriander seeds, crunchy taste of black mustard seeds and I think fennel were the first things I noticed. It was a bit dark and hard to tell what else was there, I want to say capers were a salty component but I'm not positive there. I tasted shrimp stock in the base of the curry. The vegetables and rice just soaked up all of the delicious flavor. I really really enjoyed this dish. I've since looked up madras curry and none of the recipes resemble what I enjoyed at Karolas. I'm so glad I picked this dish for my entree.

The manager greeted me on my way out to check on my experience, he's a nice guy very friendly. I've got a mail to him, hopefully the Chef will share his recipe with me so I can continue to enjoy this dish. I'm pleasantly surprised at what I was expecting to be a complete "Fail" visit. If you're ever in Costa Rica over in Manuel Antonio, definitely go and check out Karolas. It does indeed top my favorite restaurant that I got to experience in Manuel Antonio.

Ok that's it for my trip. I might post one more follow up now that I've compiled all my photos from the trip. No Bento this Monday as everyone is out for July 4th holiday. But the very first bento back will be Costa Rica.
costa rica fish off topic seafood yammering