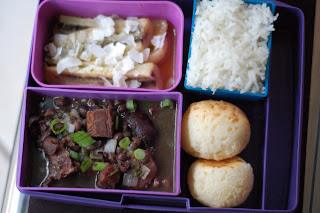 So this is a bento I've been wanting to do for quite some time. This isn't the first time I've dipped into South America, the cuisine has a lot to explore. Even something as simple as a grain (quinoa) has been featured quite a few times on the blog. Good prep and slow cooking made this an easy bento to produce. Hopefully the flavors prove just as successful for my eaters.

Main dish is Feijoada, this "national dish" of Brazil is the whole reason I've been meaning to take a look at the cuisine. This dish features four distinct uses of pork. I actually drove all over town and ended up in a small Brazilian store to buy the linguica sausage that I needed. I had to settle for some salted beef instead of the carne seca (which I couldn't find), but tasting a before and after, the dried salted beef added a depth the the dish that would not have been there otherwise. I gave a friend a good sized sample of the dish I produced and he agreed it was worth the six hours I spent on it.

Not many in the way of sides today since the rice took a whole slot, but next we have Pao De Quejio. It typically uses a manac flour but the common application is to substitute tapioca flour. This is a strange "bread", it has a stretchy mochi type of texture, I've retained several to test reheat under microwave, toaster oven, versus eating cold. I have to say it's a tasty "bread" but it's a quite a bit more gummy than I'm accustom to eating. I've tried cold and it's a good combo of chew vs flavor, and just tried microwaved and the texture is definitely a mochi texture. In either case, when eaten with the feijoada it was a pretty tasty combo. I was happy to see I could keep this lunch gluten free, despite not needing to follow a gluten free diet anymore, I still keep an eye open to see how easy it would be to convert any given lunch.

Finally for dessert, Doce De banana it means sweetened bananas or bananas in syrup. The normal recipe requires cinnamon and brown sugar, I found a recipe with more natural juices and less sugars. I had hoped the result was going to be more "glazy" but the aroma of the roasted bananas was interesting way to present the dish. I could go either way on the results so by no means is this a keeper. To "fix" this dish, I think, toast the coconut flakes, create a thicker syrup (unfortunately meaning more sugar) probably use confectioner sugar.


I have to say the feijoada was pretty freaking good, I'm glad I finally had a chance to make this dish. I actually had enough extra pork that I put it pre-mixed in a bag so I can thaw and make some more feijoada. As with all cuisines I've visited thus far there's far more for me to check out, so we'll be revisiting Brazil in the future.

The Pao De Quejio was as good as Fogo’s but I say this only bec I LOVE cheese, but more cheese please. For me personally, I love cheese oozing out of a pao ;)

I’m still trying to figure out the juices you used in Doce De banana…definitely taste orange, pineapple juices, but could there be an even more exotic element such as guava juice?

Notes: Next time toast coconut. Use confectioner sugar and make a thicker syrup to get some caramelization
June 14, 2010 at 8:56 PM

Ironjack said…
Feijoada
Not sure where this one came from

Place the drained black beans in a saucepan and add water to cover by 3 inches. Bring to a boil, reduce the heat to low, cover, and simmer until the beans are tender, 2 to 2-1/2 hours. Add additional water as needed to keep the beans covered.

While the black beans are cooking, prepare the meats. Preheat an oven to 375 degrees F. Dice the pork butt or shoulder and the bacon into 1/2-inch cubes. Place the pork, whole sausages, and bacon in a large baking pan. Roast until well done. The sausages will be ready after 35 to 40 minutes and the other meats after 45 to 60 minutes.

Cook the ham hock at the same time as the meats are roasting. In a saucepan, combine the ham hock rounds and onion with water to cover. Bring to a boil, reduce the heat to a simmer, and cook until tender, about 1 hour. Remove the ham hock rounds from the water and remove the meat from the bones, if desired; set aside. Or leave the rounds intact for serving alongside the black beans. Strain the cooking liquid into a bowl. Add the strained onions from the liquid to the beans. Add the cooking liquid to the beans if needed to keep them immersed.

Once the black beans are almost cooked, check to make sure there is plenty of cooking liquid in the pot. It should be rather soupy at this point. Stir in the beef carne seca. Cut the sausages into rounds and add them and all the other cooked meats to the pot. Then add all of the seasonings to the pot, including salt and pepper to taste. Simmer for another 30 minutes, or until the beans are very tender.
June 14, 2010 at 9:00 PM

Linda james said…
This comment has been removed by a blog administrator.
April 2, 2019 at 5:36 AM