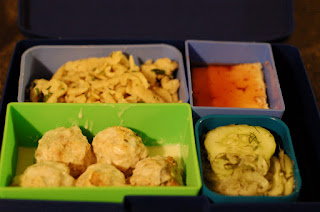 It's cold, it's October, time for some more hearty food and where better to find such food than to celebrate with a German themed Oktoberfest Bento. It was tempting to go with standard well known Oktoberfest/German foods. I was ready to break out the meat grinder and sausage stuffer for some bratwurst when I stopped myself and thought, what else do Germans eat? Thinking back to my business trip this summer, the menus I saw in Frankfurt were chock full of great tasting foods. So I began researching German foods and came up with an nice list of stuff and found some good stuff from various "Omas" (grandmothers) and made some modifications for my own tastes voila we have lunch

Let's start with the main entree Kummel Klopse. I'm a sucker for meatballs, really, if there's a list of things I can make and meatballs is on that list, then I'm going for the meatballs. I'm fascinated that every society/culture has some form of meatball, they are all different in very significant ways but all share the fact that they are indeed a ball of meat. A yummy delicious ball of meat at that. Here we have a Kummel Klopse (Chicken and pork meatball with a Riesling sour cream sauce, I think Kummel Klopse is caraway meatball). I opted to blend a chicken meatball recipe with two other recipes as I liked the idea of making the meat ball a bit more healthy. I used the simmering liquid of the four batches of meatballs (after draining the fat) to form the basis of the sauce, my decision to go low sour cream fat did not detract from the dish since there were so many flavors going on with the base simmering liquid that fat was not necessary. I gave the suggestion that my eaters could combine this meatball dish with:

Homemade spaetzle sauteed with pancetta and parsley. Yes my bacon strikes again and I do promise to post on the bacon making. I have a brief intermission coming up and I've been saving it for just that type of rainy day post. Back to the spaetzle, I went thru a couple of trial batters before settling on the seasonings, I think my ramping up the nutmeg really helped. I also wanted to give the option to eat the spaetzle by itself, so flavoring it with a quick saute along side the pancetta gave it enough to standalone. This was my first venture into spaetzle making and I'm very surprised how easy it was to make. I think I'll do a batch with the gluten free flour to see how different it will be.

Next we have Gurken Salat, a cucumber salad in sweet dill dressing. Basically this produces a quick sweet pickle after a couple of hours marinating in the fridge. Very simple and light tasting to help offset some of the heavy set items in the box. Not really much else than what the picture tells you. I used dried and fresh from the garden dill, it's interesting the taste of the two types of dill together. I think the dried dill really imparts a lot of flavor, but the fresh dill gives a better texture.

On the side we have Bierocks which is a pastry stuffed with cabbage and beef. I believe this originated in Germany but has evolved in it's time in the United States with a popular showing the the midwest. The Bierocks themselves were pretty size able (about the size of a small hamburger) and probably could have served as a main dish by itself, so no one should walk away hungry from this bento. I'll confess that I had to take a bento shortcut by using some ready made biscuit dough to wrap everything up. Cooking for twelve is an ambitious project and I'll need to get use to the idea that I can't do everything from scratch or I'll end up killing myself trying to get the food out. I'm actually quite pleased with the use of biscuit dough as a shortcut definitely something I'll remember for the future.

Finally for dessert, I found a Kase Kuchen recipe handed down by someone's Oma. I'm sorry I didn't get a shot of it (in my haste I forgot to take a picture). I found it interesting in that it was basically a cheesecake, but instead of using cream cheese it went light with a cottage cheese. The dessert turned out to be a far lighter version of a classic cheese cake that was not as creamy in texture. I decided to give it a strawberry glaze to add some more flavor as I found it was a little plain by itself.

Fun box to build, I've already gotten a compliment from a new bento-er that although her favorite is still her Oma's spaetzle, was definitely good. :) Ok well that's all for now. Intermission next week but look for a post.

Ironjack said…
Thanks @Lucinda and @~avie~ for visiting!

I got good props for the bento. My CEO exclaimed it was some of the best German food he's had, a great compliment considering how well traveled he is. (and the fact we have a German office :) )

I think a strong warning that the Bierock's require a toaster oven reheat was the right thing to do. Better eat it cold than to reheat in a microwave.
October 13, 2009 at 7:46 PM