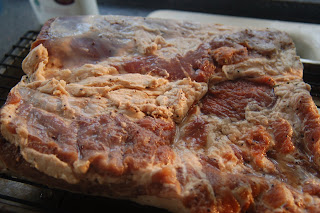 Wow, two posts in two days will wonders never cease? Well I've had this one queued up for sometime waiting for a week where I have a bento intermission. So as I have long promised here's a brief post on my adventures in bacon making. This is something I've been wanting to do since I first taste home cured bacon by Ryan from NoseToTailatHome, it's so different from the regular stuff you find in the grocery store. The only way for me to describe it is it's got a fresher flavor (even out of the freezer) and a more substantial meaty quality. If you come over you can try some. :)

The hardest part about making bacon was securing the sodium nitrite necessary for the salt cure. Pink salt is the necessary ingredient in the cure to insure you don't get an unfortunate case of botulism. Why is it pink? I'm very glad you asked, after a bit of research, I found that sodium nitrite is naturally pure white and actually toxic in high amounts. Since it's used in kitchen for the purposes of curing, and easily mistaken for salt or sugar it is actually purposefully colored pink in order to avoid bad accidents. Out of that giant bag, I only needed about 3 teaspoons for the 11 lbs of pork belly. So a little goes a long way, you might want to keep that in mind when ordering it online.

Next I had to secure the pork belly, for that I thank thehungryengineer for the tip off that I could go to the local farmers market and special order a belly from Richardson Farms. That giant bag holds 11 pounds of pork belly goodness. That's a whole lotta bacon going on and I was ready to roll.

With that much pork, I decided to try bacon three ways: plain bacon, maple bacon, and pancetta (italian bacon). The cure for the Pancetta was the most fragrant (pictured above). It's actually surprisingly simple to cure your own bacon, you just put the whole thing in a bag, seal it off and flip it every couple of days to redistribute the salt and resulting liquid that comes from the curing process. I actually opted for a vacuum sealing my bags hoping for better coverage, it seemed to work out pretty good.

Seven days later voila you have bacon, I actually had to let mine cure for nine days, for reasons beyond my control but the additional time didn't seem to hurt anything. The pancetta required an additional seven days of air dried curing and I opted out of tying it up as is done traditionally. All three slabs of bacon are very tasty, I've been using the stuff in my bentos and the bacon imparts such awesome great flavor. Of course it's bacon, how could it actually be bad
bacon off topic pork preservation