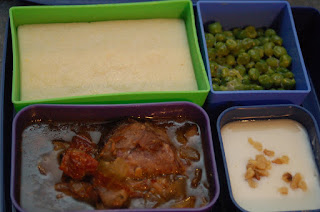 Wow looky there I just crossed 20k visitors thank you all for dropping by! Today's post I bring you a farewell to an institution of the food magazine world. Gourmet magazine recently announced their closure and it's a sad thing to see a publication that's 70 years old go to the wayside. There's many opinions, "They needed to change with the times", "food publications have lost to the tv networks and how they present food", and my favorite "just goes to show how no one cooks at home anymore". I digest food magazines and rip out the recipes of interest, I use these as points of view to teaching me to "make it my own", the loss of one more point of view is always sad. Gourmet actually gave me my holy grail of black forest cake recipes, something I've only found at a small bakery in Ft. Worth. Granted I was always annoyed that most of their recipes spanned multiple pages, but certainly it was no reason that I would not buy a copy when at the bookstore or on my way out for a business trip. I'll take exception to recent critics from well known chefs or food writers on how no one cooks at home these days, my friends and I cook and content providers like food network and publications like Saveur, Fine Cooking, and Everyday with Rachel Ray (just to name a few, and yes I like Rachel Ray) are print and web publications that I carefully watch and investigate to improve my cooking. My only regret on is that my hero Alton Brown hasn't built his own empire to provide me a magazine to help out the inner food geek. If consuming and creating food comes from experience then what better way than to include the wisdom and experiences of others. Ok enough soap box onto the show.

Entree Lamb Ragu served with Manchego Cheese Grits. Ragu/ragout however you want to spell it, I've learned means a hearty meat stew. The Gourmet Ragu came to me as a suggestion from April over at theHungryEngineer, in fact this suggestion and the closure of Gourmet is what inspired my bento this week. The lamb is braised for about four hours in bourbon and a host of aromatics. The use of Manchego cheese in the grits is brilliant, it's not the sharp tang of a cheddar rather a subtle salty flavor. I had to make a change to the original recipe in that the grits as made was more like a soup than a soft textured bowl of grits, so I added enough grits to match the texture I was after. I think a correct reheat of grits and a subsequent reheat of the ragu over the grits will produce what Gourmet Magazine intended.

Creamed Peas with Mint. This is a really simple recipe, the cream sauce is a simple infusion of cream and mint, I think if I were to do it again, I'd let the cream reduce a bit further so it has a better cling to the peas or use a bit cheese to thicken the sauce. A simple saute of celery, onion and frozen peas brings this dish together. This side has a simple fresh taste that really keeps the meal light and refreshing. The only improvement would be the introduction of bacon or some sort of fat to bring out some more flavors, but I feel I've been over using my homemade bacon and of course I decided to follow the Gourmet recipes as presented.

For dessert we have a Cardamom milk pudding. The pudding does indeed require the fridge time that the recipe recommends. My only change here would to move away from the arrowroot as thicker, it introduced a texture problem (despite straining), I would have opted for eggs instead of a starch. I suppose the calorie savings over eggs would probably have caused me to try it via the method suggested by the recipe but knowing how it turns out I prefer the smoother texture that I'd get from eggs. That said, the resulting pudding was very aromatic without being overwhelming.


I enjoyed making this bento although I'm still struggling with cooking for twelve. It's logistically a lot harder than cooking for six, a normal recipe is usually a serving of six. Cooking for twelve requires using all of my burners and waiting for dishes to finish before moving to the next stages or worse having multiple dutch ovens which is not something a home kitchen is equipped for (I bought another DO today). Even with meticulous planning and staged prep work I'm struggling to churn out lunch quickly I guess I'm still working out the kinks. Thanks for coming by!