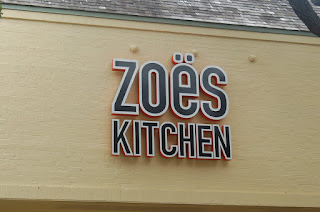 I was invited to checkout a new restaurant: Zoes Kitchen. It's tucked away in the arboretum area, it's got a nice hip vibe. The only way to describe it is "family friendly food with a Mediterranean influence" it's fast foodish in that you order at the counter but the setting is an enjoyable open space where you can share a glass of wine with your food. It's a nice in-between where dinner/lunch doesn't have to be a big production.

Our hosts for the evening, first we have Kevin Miles and Jennifer Mims from the corporate offices. Next we have Abraham Houma with his brother Hasoum (not pictured) are the local corporate partners that manage and oversee the Austin restaurant. Just a bit of background both brothers worked within the Zoes portfolio restaurants before joining Zoes and moving up to partnering and opening the Austin location. Zoes does franchise but many of it's restaurants are corporately owned. Everyone was eager to speak to Zoes young company culture and it's clear that they had a lot of passion for food and a clear desire to preserve the origins of Zoes. Zoes Kitchen started with Zoe Cassimu's humble restaurant that was known for their Chicken Salad sandwich. It was home cooking out of a small spot from a passionate woman that cooked everything by hand and delivered it with love. Her son took these recipes and helped expand it to folks outside of Alabama.

The aim for Zoes is to deliver an accessible Mediterranean inspired meal that you can chose to eat on the light side or go with a heavier meal with kabobs. The idea is you can bring your family there, or order their takeout for four and have an easy meal for the family after a long day of work. They still hold a lot of the original recipes such as the chocolate cake, and the chicken salad sandwich for which Zoes Kitchen is famous for. Although not touted, Zoes uses recycled plastics and apparently built their Austin location with the environment in mind.

Ok I'll warn you I took a ton of photos the folks at Zoes Kitchen went out of their way to open the restaurant (prior to the big opening event tomorrow) to us so we could actually taste, take pictures, and ask questions about their food. Although I didn't get to try everything (there's too much really), I will only show you foods I did taste.

We'll start out with their pita pizza. I got to try two of their pizzas above you'll see their Veggie Pita pizza, I got to try their regular chicken pita pizza but missed the photo op. I loved both pizzas, they used a healthy dose of fresh basil and delicious feta. It actually reminded me of traditional italian pizza, thin crispy crust, light sauce and simple toppings. I really loved it, I didn't get filled up on a bunch of pizza dough and felt light.

Next up we have a series of Rollups. Spinach, Steak and Chicken rollups. It's basically a simple wrap that's been press grilled. I actually liked the spinach rollup, a lot of places tend to drop in a ton of cream cheese or cream to get the spinach to bind, this was not the case here, you got to actually taste spinach. The Steak rollup was served with a lemon yogurt sauce, it was a bit creamy and tasted like a very light aioli.

I'm really surprised at the amount of vegetarian friendly items on this menu, I suppose this makes them a nice fit in Austin. I had a taste of the Veggie stack, it had grilled portobello, mozzarella, feta and zucchini. A very tasty and substantial sandwich, the feta spread lent a nice bit of salty lift to the vegetables. Everything is freshly made and it really came out with the sandwich, everything had a just off the grill taste, the vegetables had a good snap no hold over sogginess here.

I enjoyed the hummus. Most other hummus I've encoutered around town really use too much tahini for my taste and they tend to blend it until it's a peanut butter like consistency. Now that might be how it is done traditionally, but that's not for me. Zoes version is a bit closer to my own, more lemon, less tahini, and less processing so you can have the texture of garbanzo beans. You've got my vote for best hummus!

I asked for a sample of their marinated slaw and Braised white beans. Ok those beans are heavenly, I hesitate to ask what makes it so tasty for fear of feeling guilty. The slaw was quite a departure from a regular slaw it features a bit of feta and a light vinaigrette. I think the flavors were there, my personal taste would be a bit more tang. Fortunately, they have as part of their regular table condiments a house vinaigrette with Zoes seasonings, red wine and olive oil.

Finally, I'm not big on desert, you guys all know that. I will admit that the cake was very moist and tasty, everyone else really enjoyed this dessert. The staff tells me that this is the original recipe from Zoe that has been preserved and made by hand from scratch (like everything else).

I will say that the Zoes folks are an enthusiastic bunch. Even the corporate folks (Kevin being the Executive VP of Operations) were out there greeting folks, cleaning tables and serving food. It's a great sign that even though a humble kitchen has gone corporate they've not lost their touch of the reason for being: showing hospitality and serving food with passion and caring.

Thank you so much to Zoes Kitchen for inviting me to sample their offerings. I look forward to the grand opening tomorrow (I'll post pictures). I'll definitely be coming back on the way home to grab a quick dinner.

Ironjack said…
@Par I don't have Zoe's white bean recipe, but I did do one in a previous bento. I got the recipe from recipezaar and it was quite good. I substituted canned beans for dry. (using 2 large cans of white beans) and of course my home cured bacon

Rosemary White Beans Recipe
SERVES 8
2 cups dried white beans
3/4 cup diced bacon
1 cup chopped onion
1 teaspoon minced garlic
4 cups chicken stock
4 cups water
2 tablespoons chopped fresh rosemary
2 tablespoons unsalted butter
kosher salt
fresh ground pepper
Soak beans over night
Heat the bacon in a large pot over medium heat, until the fat is rendered and the bacon is crisp, about 8-10 minutes.
Add the onions and cook 8-10 minutes until soft.
Add the garlic and cook 1 minute.
Then add the chicken stock and water til simmering.
Drain beans of their water and add to pot.
Cook on medium heat until soft, about 1 1/2 hours.
There will be just enough liquid in the pot so it is frothy— if necessary turn up the heat to reduce the liquid.
Stir in the rosemary and butter, and season to taste before serving.
February 16, 2010 at 5:05 PM