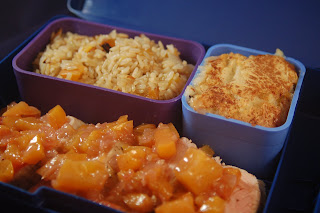 So I counted it up, this is my 50th bento for my eaters. 50! Wow! granted I've posted more, but there's a lot of Offtopic "yammering" and also some meals that weren't lunches. So my eaters should have collected 50 small index cards with my lunch time greetings and menu description! Go me! Ok enough back patting.

Another Fruit themed bento this week. My wife suggested a peach challenge for me. Didn't have time to hit the farmer's market this week so I had to make due with the regular grocery store. Despite the tenderloin, I came in under the five dollar mark this time (I was impressed) I suppose partly due to the fact that peaches are in season. I scoured the internet for various ideas and came up with this set of highly modified mix and match recipes.

First of we start with a Pork Tenderloin with Peach Chutney. The shot isn't very pretty, infact the color from the chutney messed with the color of the overall picture (I picked the best one). I think it's my excuse to buy more lights. I digress. The tenderloin is a standard oven baked pork tenderloin, I purposefully cooked it on less done end anticipating the microwave to finish the job for me. The chutney is a simple mix of cooking down onion,ginger, peach spiced with cloves, cardamom, and a dash of nutmeg and finished with some vinegar and sugar. A great sweet and savory balance to go with with ever adaptable pork tenderloin.

Next we have basmati fried rice with peaches. The base recipe had some good intentions with it, but I felt that it was missing a few things, maybe it was because I was using brown basmati rather than white. I cooked the peaches down instead of leaving them raw, I felt it would bring out more of the sugar component. I also added ground ginger and ground cloves because the only flavor that was coming out was the nutty brown rice. Everyone enjoyed the rice, and I got comments of it could have stood with a bit more on the spice to bring it all out.

It was pretty hard to resist the call of a chilled berry soup from the strawberry bento, this time since I was doing less I put it on the menu. This is a nice Chilled peach soup, yes I was bad and used some cream in this, but having some local honey left over from an earlier bento, I did use that instead of the refined white sugar. Give a little take a little. With these chilled cream soups lots of times they kind of taste like melted ice cream (which in a way they are), I made sure to cut back on the cream and add a bit more water and juice to make it more soup and less ice cream.

Last but not least, you can't do a peach bento without doing a cobbler! I'm not much of a cobbler expert (yes I should have plated for the picture). But I'm told it was really spot on good. Being a cobbler novice, I took some of the best of breed on cobblers (there are many opinionated cobbler recipes, fruit then batter, batter then fruit etc..) the common theme was a lot of badness including stick(s) of butter. Being of the heath conscious side, I opted for 1/4 of the butter and adding some sugar and cinnamon on top hoping the carmelized sugar and spice would make up for the amount of calories I saved by cutting so much butter. Apparently it worked, I still admit it's not the healthiest dessert I could have gone with and yes I could have used my gluten free flour to make this box gluten free, but I didn't want to mess with it too much.

A fun bento to put together, the grocery checker admired my appetite for peaches. Still trying to think up what to cook for next week, I've not had much time to think about a batch of new themes.

I'm going to that Miracle Berry event I was talking about. I shall have camera in tow and put up a post!
chilled soup cobbler fried rice peach pork tenderloin