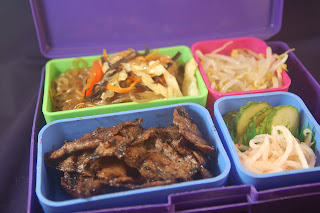 Sorry about the sparce posts, been dealing with some emergencies here at home. I managed to dig out some time and come up with a Korean inspired bento. This one's been on my list to do for quite some time. I'm not sure why I never got around to building a menu, better late than never I suppose. This box is gluten free box, even though we've reverted back to a normal diet. Ok on with the show.

I really enjoy korean food, I think because of all the little side dishes and pickles they serve you, so no korean themed bento could be complete without a bevy of side dishes. Starting from the left we have Sook Ju Namool, its a lightly seasoned bean sprout dish served cold. The bean sprouts were quickly blanched and a bit of salt, garlic and sesame oil are added. Next we have Oi Muchim, or spicy cucumber salad. The process for this and the next dish is a light quick pickling. I managed to get my hands on some korean cucumbers (thank you farmers market) very different from regular cucumbers. Last we have Mu Chae, spicy daikon salad. Korean food seems to be big on the red pepper powder, when buying it at the grocery store I could only get it in giant bags. Surprisingly despite the angry looking red flakes both dishes were very mild and got high praise from my diners.

The next side dish is called Chap Che, it's Korean glass noodles with stir fried vegetables. This is a very tasty dish deriving its flavors and colors from soy sauce, sugar, sesame oil. Korean glass noodle is very interesting stuff, it's made of sweet potato starch when cooked it has a lot of elasticity and is really "shiny". It can be a bit hard to work the ingediants into the noodles as they seem to cling together in one large lump. With a bit of tossing with a couple of pair of chopsticks I managed to get the job done. Very tasty and definitely a keeper

Last I broke out the trusty indoor grill and made some Bulgogi (on the right) and Galbi Gui. Bulgogi is a barbequed marinated beef that has been very thinly sliced. Galbi gui on the other hand is a barbequed marinated beef short rib. Both dishes make use of the same marinade it's just different cuts of meat. The marinade is very fragrant (thanks to the sesame oil) and the sugar in the marnade gives that perfect caramalized char. I've already gotten questions about how I managed to slice such thin beef. If you look around most asian grocery stores will stock very thinly sliced beef in the frozen section for things like hot pot, or shabu shabu. Or if you're my Dad, you freeze the beef and slice it with a giant cleaver.

I had a great time making this bento, it's a welcome change from the stress of family emergencies. I hope to post up some more later.

~avie~ yeah I was going to make the pancakes but there was just so much to make and no more room in the box :)