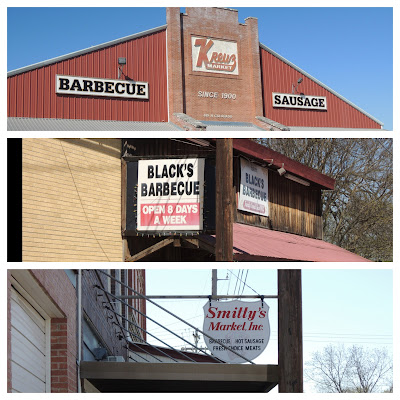 I took a mini stay-cation and on day two I set out to Lockhart Texas for the legendary big three bbq joints. Kreuz Market, Black's Barbecue and Smitty's have been around for a long time each have their own unique history, Black's claims oldest continuously opened bbq, Smitty's and Kreuz have a contentious history of it's own all lay some sort of claim of being oldest. I'll let you read up on the history and you can judge for yourself. The bottom line is: in Lockhart, they are hardcore bbq fans. If you haven't made the pilgrimage it's worth it just to check out the history in stores.

I know I'm about to open myself up to all sorts of bbq religious zealot-ism in the comments with this post, but please keep in mind this is my opinion of what I ate and I'm actually not much of a griller so you're basic grill fanatic will probably detect more subtleties than I will and will have differing opinions on sauce/no sauce and cooking methods. Anyway, to be fair I opted to go with the classic three meats I usually get for each of the bbq establishments: Brisket, pork spare ribs (I like the greater fat content than baby back), and sausage. Each place had additional stuff which I did order and I'll get into. 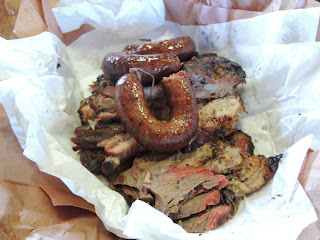 Fair warning, I did say that the history and details are a bit sordid so I don't want to perpetuated any rumors or falsehoods but what I do know is that Kreutz is the original name of a famous bbq establishment in Lockhart. You can read about the history here, but there was clearly a change of ownership to Edgar Schmidt (hence Black's claim of oldest continuous ownership). When the owner passed away there was a disagreement between the heirs (the controversy is the why) either way one of the heirs got the name and the other got the store. The reference to "forced to relocated" in the Kreutz's history is what draws the eyebrow raises when you compare notes. Anyhow the original location of Kreutz is what is now Smitty's. On the "move" to the new location of Kreutz the proprietor purportedly took a metal bucket(s) of embers from the original pit and started the pit of the new Kreutz Market.

Anyway when you get there there's a large hall leading you to the pit where you order your food. Be warned Kreutz and Smitty's both only accept cash. How was the food? Obviously they did a great job with the bbq, you can see the big band of smoke ring on the beef shoulder and brisket. The sausage was firm and tasty. I especially enjoyed the ribs which were fall apart tender, an attribute that I highly value. A lot of places the ribs aren't tender enough and the meat (especially on the edges) come out hard, full of flavor because it's all condensed but it's like eating jerky. It seemed to be simply treated with salt and pepper (I'm probably wrong), by far my favorite pork rib out of the three that day. 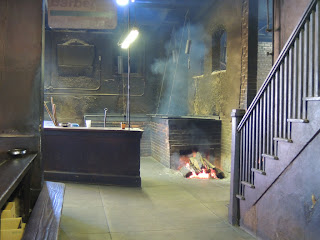 Next I hit up Smitty's, I didn't snap a photo of the food because it basically looked the same as Kreutz so I took a picture of one of their pit area. What might look similar in meat has a distinctly different style.  After visiting Kreutz it's clear they tried to replicate the original location as closely as possible, so the Kreutz pit looks like a larger version of the Smitty's bbq pits. As you can see it's a rather non-descript hall that leads to room on the right (at the bottom of the staircase) where you order. I had to walk in and out twice to be sure I was in the right place (Kreutz had signs directing you, but then again, if you're not a n00b like me you would have known). Smitty's mops down their ribs in a glaze and I could detect the same treatment on the brisket. The resulting brisket and ribs were more "intact" than at Kreutz and less fall apart tender. For flavor I liked this little difference but as I said I prefer the more tender fall off the bone at Kreutz. Like Kreutz they offer the lean beef shoulder which I ordered I can't say I could tell the difference between the two. Both places have some "traditions": first, no utensils (except plastic long spoons to stir your tea) and two, no sauce this is all about the beef nothing else is allowed to get in the way. I have a thing about using my hands on food it didn't go well for me. 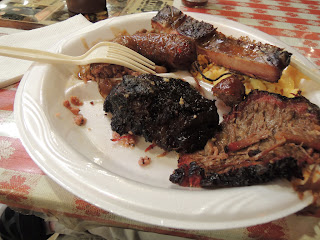 Finally Black's, their "extra" that I ordered was the beef rib, a friend had commented that "I don't like beef ribs, a whole lot of work for not a lot of meat". I'm here to testify that this is NOT the case here at Black's each beef rib was huge, about the size two dry erase markers stack on top of each other ON TOP of the bone.  They offer a few different types of sausage (I went with garlic for lunch and original for taking home). I wasn't a big fan because as I cut into the tough casing the sausage just crumbled apart, the flavor was good the texture was just a bit off for me.

The "burnt end" was the special treat (pictured above), I read that if they offered you the burnt end you are to immediately thank the bbq gods and take the offer. The "burnt end" is the end of the brisket tip and has a lot more fat content. I was fortunate enough to get to Black's early and when I asked for brisket the guy at the counter offered me the "burnt end" to which I instantly said, "yes!". I thought it would be crusty and overly seasoned NOPE, it was like eating meat butter (that's the only word I have for it) meat but rich beyond belief and just the right seasoning. Hands down Black's brisket wins the day it was phenomenal, super moist, smokey flavor throughout every bite. I'm drooling just thinking about it as I type.

Ok all three places had sides and other meats so please don't get the impression that's all they had. I just had to restricted my bbq purchase to less than $200 and my cooler couldn't hold much more. I'm going to need to check out Snow's and Cooper's to complete my bbq tour. I already know the first most likely question I'm going to get, but I'll wait till someone actually asks before say anymore. In the mean time, I'm going to go and pass out in the corner with a case of the meat sweats.

Carl said…
Jealous! I always wanted to do this tour. Did you eat a little from each location then take the remainder home? Although the focus was not sides did any of the places have something out of the ordinary?
March 23, 2013 at 5:09 PM

Ironjack said…
Yes I ate a bit from each place with onlookers at my 4lb pile of bbq. They witnessed me take a bite and haul of with my butcher paper wrap package of goodness. All in all I came out with 12 lbs of bbq.

I didn't see anything out of the ordinary in sides. I'm not even sure Smitty's had sides. I know Kreutz's did. Black's actually had a "sides" bar where you got your plate filled whatever sides you want and then ask for the meat.